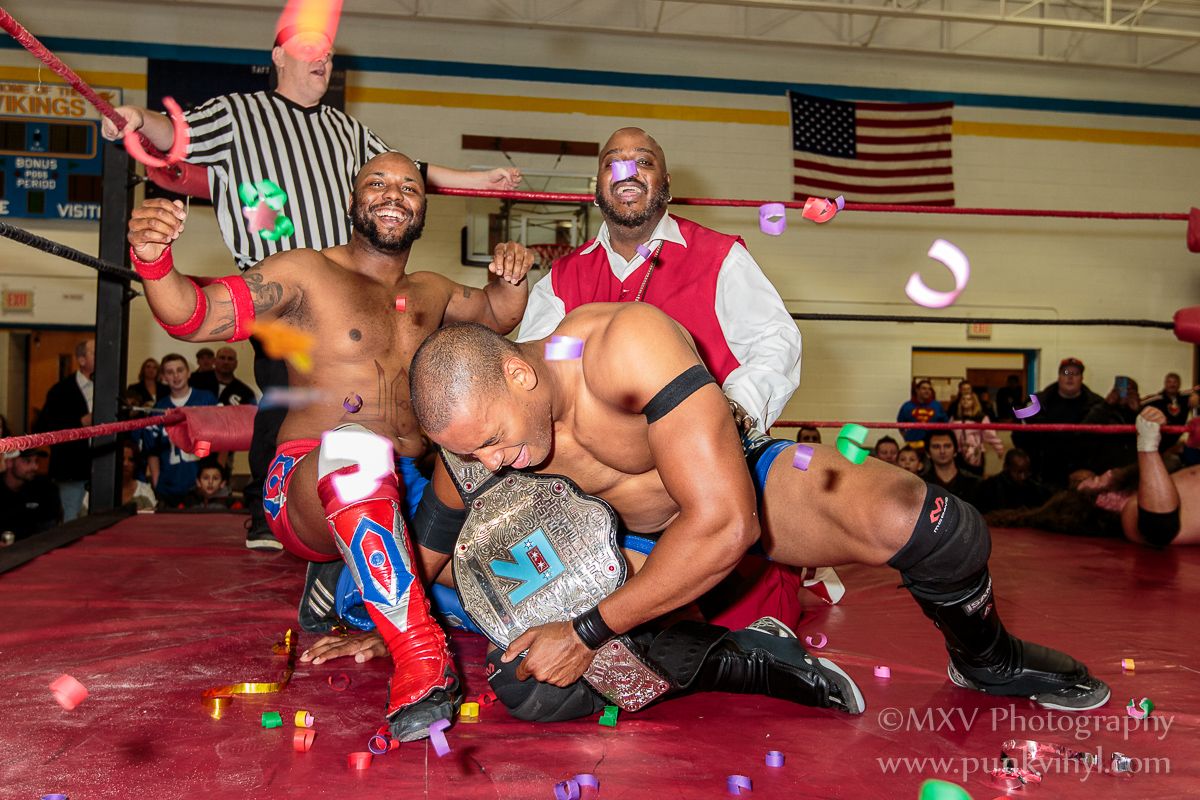 Resistance Pro Wrestling celebrated their third anniversary Friday night with their final show of the year, And Justice For All. The company always takes the month of December off. They pulled out all the stops and put together one of their strongest shows of the year, if not the strongest. The show was not only a fundraiser for Taft School in Lockport, IL but they also brought in Hurricane Helms to appear and wrestle a match for this big show. The gym was packed full of families and featured more kids in attendance than they’ve ever had.

After the opening ceremonies, Warden Myers and Remi came to the ring and they were looking for a fight. Since Remi didn’t have a match on the card, the Warden decided they’d challenge anyone in the building to try their hand at fighting Remi. After a lot of trash talking by both men, a big burly looking fellow in the crowd had enough and tried to rush the ring. Security held him back but he talked them into letting him accept the challenge. Remi started giving the guy a beating but after a couple of minutes the big guy started fighting back, and then hit Remi with almost every flavor of suplex you could think of. The guy must have been a huge fan of Taz back because he had a similar fighting style and look (though this guy was much taller than Taz). Not only did he throw Remi around like a rag doll but he choked him out and won the match! After the match he introduced himself as Russ Jones.

Crazy Mary Dobson faced Lylah Lodge in the second match. Lylah was the stronger of the two and used that strength to woman-handle Mary for the first part of the match. Pain seems to make Crazy Mary crazier and once she took enough she went into crazy overdrive and fought back and got a win. Mary flew all over the place and screamed her head off the entire time. It was a very good match with great work by both ladies and Mary gets more entertaining every month.

It came as no surprise to any regular RPro fan that the technical match of the night (and perhaps the best match of the night as well) featured Jake O’Neill. Jake wrestled John Skyler in a great match full of good holds, reversals, near falls and great pacing. These guys tore it up and it was a great ride from start to finish. It is impossible to have a bad match out of these two amazing talents. Skyler got himself a hard-fought but well deserved pin.

Cobra (with Justin King) and Suge D tried like hell to up the ante after the last match and came pretty close. They had a very different but entertaining match that featured Suge’s usual comedy along with some really exciting action.  Some great flying kicks and twists and turns in this match and they were going toe to toe for the entire thing until Cobra found an opening and hit his finisher on Suge.

WWE legend, Hurricane Helms, was walked to the ring by Taft student, Benjamin Ryan, who sold the most tickets to the show. Hurricane faced former RPro champion, The Ego Robert Anthony. Ego grabbed a mic and told Hurricane that he wanted the belt he was wearing if he won the match and if he lost, then Ego would retire forever from RPro. The two had a solid match that saw Ego take control for the first half but Hurricane made a comeback and ended up winning the match, and costing Ego his career! Thank you for three entertaining years Ego!

Body Magic defended their tag titles against former champions, Da Soul Touchaz. Eric St. Vaughn normally makes his partner, Brady Pierce, do all the heavy lifting but this time ESV did more than usual. In keeping with tradition, however, every time he was even remotely in danger of losing control of the match for more than a few seconds, he tagged himself out and let Brady do the brunt of the work. There was a lot of back and forth in this match and some really cool double team stuff by the Touchaz but it wasn’t enough to get their titles back, and after Brady nailed Jaz with his massive spine buster, it was one, two, three.

Jocephus put the heavyweight title on the line against fan favorite, Marshe Rockett. The fans were chanting for Marshe the entire match and Marshe took that energy and used it to overcome everything Jocephus and “the way” threw at him. After plenty of interference by Eve and Scotty Young, Da Soul Touchaz came out and chased them out of the arena so Marshe could finally try to finish the match without anyone helping Jocephus. After some really great reversals and near-falls, Marshe hit the M-80 on Jocephus and guest referee, Mad Man Pondo, counted to three and crowned Marshe the new RPro heavyweight champion. Marshe and C-Red shared an emotional embrace and then Willie and Jaz joined them in the ring to celebrate. Marshe has been in some of the best matches of the year in RPro and certainly earned this and should be a great champion. The fans went nuts the entire time.

D’Arcy Dixon and Mickie Knuckles finally got their hands on each other in an effort to settle the score between them, and the RPro women’s title was on the line. This match was held inside a cage because it was the only way anyone was going to be able to contain these two and keep the shrapnel to a minimum. It barely worked though as D’Arcy attacked Mickie when she was coming to the ring and the two fought outside in the crowd for quite a while before finally entering the cage and starting the match officially. When they got in there, they hit each other with everything but the kitchen sink. These two hit moves on each other that looked so stiff and powerful it made most guys cringe and they beat the crap out of each other. After nearly killing each other, D’Arcy was trying to crawl out the cage door and Mickie was able to dive over her through the ropes and out to the floor in a hail Mary play that won her the match and kept the title around her waist.

And Justice For All was a great way to celebrate three years for Resistance Pro and a great way to end their year. We got a new champion, a possible close to a feud, and nothing but really good wrestling matches. The fans more than got their money’s worth and it will feel like a long wait until January when the company returns to ring in the new year with a new champion and some new stories.

Check out additional photos from And Justice For All here!