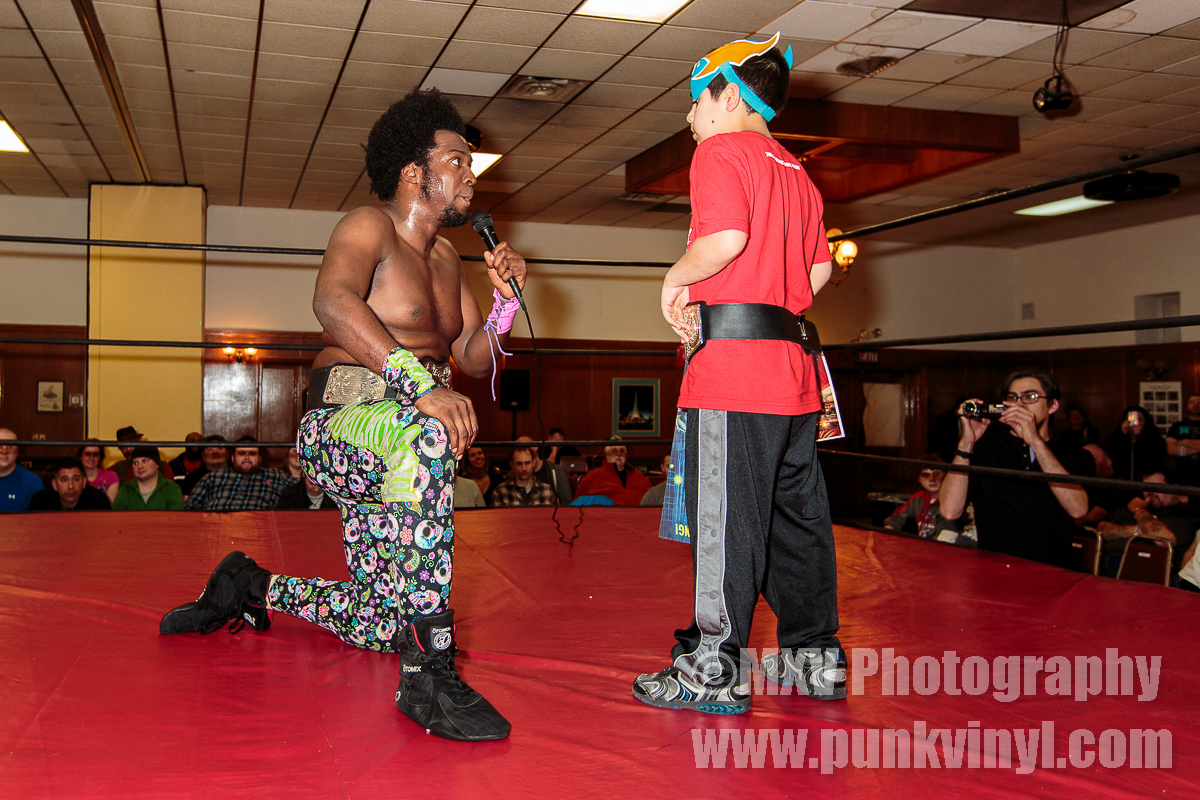 It is a new year and a new era for Resistance Pro wrestling and they started off the new year right with Animals. The show featured much of the regular RPro roster along with some fresh faces. Fans filled up the VFW hall in Summit, IL for an evening of exciting wrestling action.

Before the show started they had two dark matches. The first was a three-way match and the second was a one on one match. Each was about five minutes long and all five guys did a good job of warming up the crowd.

The main show started by having guest of honor, Kavin Chandarana sing the national anthem.

Body Magic defended their tag titles against Lock Up. When Body Magic came out, Brady Pierce was missing. Eric St. Vaughn entered the ring and was a little confused as to where his partner was. The Warden took the mic and said he knew what happened to Brady as he opened his jacket to reveal Brady’s title belt and said he’ll be taking the other one after Lock Up win the match. Mad Man Pondo came out and told ESV that he’d sub for Brady for the match but if he did then he’d be owed a favor. The two men agreed and the match got started. Pondo did most of the heavy lifting for his team until Lock Up started double teaming him. When Pondo tagged in ESV , he fought them off for a bit until both members of Lock Up started beating on him mercilessly. The referee disqualified Lock Up and Body Magic retained the belts.

Two newcomers faced each other in the second match. Rob Fury and Shane Mercer went close to 15 minutes in a match so exciting that they received chants of “this is awesome” and a standing ovation! These guys beat the holy hell out of each other in an even match with great pacing and built up to bigger and flashier moves towards the end and the audience was on the edge of their seats for the whole ride. When there was only about 30 seconds left before reaching the time limit, Mercer hit Fury with some crazy slam off the ropes that spelled the end for both men as neither were able to answer the referee’s ten count and the match was declared a draw.

Willie Richardson of Da Soul Touchaz (with C-Red in his corner) took on Cobra (with Justin King) in the third bout. Cobra and King have been hassling Da Soul Touchaz for some time now and C-Red would love nothing more than to get his hands on Justin King and get rid of him once and for all. Willie and Cobra had a good match that saw Willie using his power to maintain control which infuriated and worried Justin King to the point that he interfered during the match when Willie covered Cobra for a pin just to keep Cobra from getting pinned. Cobra was DQ’d which means King can still keep boasting how Cobra hasn’t been pinned or submitted to anyone and after the match C-Red managed to hit King with a trash can and chase him out of the building. This certainly isn’t the end of the feud between these guys.

Russ Jones (who debuted at the previous show) once again showed off his power and strength in a match with newcomers Sean Mulligan. Sean was a drinking Irishman who the crowd gravitated towards instantly and he gave a good fight but ultimately was no match for the bigger Jones who got the win after some impressive and painful looking slams. Mulligan didn’t let that get him down though and invited the crowd to join him at the bar after the show to drink more.

Acid Jaz (with C-Red) initiated newcomer Dash Sullivan (nephew of Taskmaster Kevin Sullivan) to Resistance Pro by giving him one hell of a fight. Both men pulled out some impressive moves but the more seasoned Jaz got the win. A frustrated Sullivan was interviewed by Zach Thompson after the match and let him know how frustrated and annoyed he was. Dash seems like he could be every bit at twisted and unpredictable as his uncle was.

Seven women took part in a “pick your poison” gauntlet match where the winner gets to pick any match she wants at the next show (3/21 in Summit, IL). First up was Aniviel and Paloma. Aniviel stepped right out of a time machine from the 60’s into the ring as she was a hippie complete with tie-dye and peace signs. When the match was supposed to start she asked Paloma to give her a hug and instead Paloma hit that hippie with a huge forearm and knocked her on her tie-dyed ass and got a fast win. Poor Aniviel didn’t know what hit her! Next up was Thunderkitty  who came out and fared a lot better, so much in fact that she got the win. Cameron Starr dished out some abuse on Thunderkitty but also came up short and Kitty continued. Lucy Mendez was her next challenge and Lucy beat the crap out of Thunderkitty and it looked like Lucy was going to get the win but Thunderkitty countered a move and was able to lock on her sleeper hold and Lucy was put to sleep and counted out. Lylah Lodge ran out and hit Thunderkitty with a slam so hard that it felt like an earthquake and the battered and tired Thunderkitty couldn’t continue and was pinned. Crazy Mary Dobson was the last women to enter and she and Lylah had a strong match with exciting action that ended with Mary hitting a Canadian destroyer on Lylah and getting the 1-2-3. Great work by all seven ladies made this a lot of fun from start to finish. After the match Mary was asked what match she wanted but she just said something about going to Disney World and left the entire audience confused.

Scotty Young was scheduled to challenge Marshe Rockett for the RPro heavyweight tile. Marshe came to the ring in his street clothes (and had C-Red by his side). Marshe said that due to an injury he was not medically cleared to wrestle and since he had no timetable as to when he’d be able to he had no choice but to forfeit the title. His forfeit meant that Scotty Young would win the belt but Marshe also said he had someone he thought deserved to fight for that title that evening and called out Suge D. The crowd went nuts when Suge came out dancing. Once Suge got into the ring and Marshe told him that he deserved the shot he was all business. Scotty was all business as well and went to work on Suge with a fury never seen before. Scotty was intense as he went to work on trying to dismantle Suge and Suge’s back was the target of the fury. This was a side of Scotty that hadn’t been seen before and he was really impressive. Suge has more heart than anyone on the roster and wanted that title so bad that the only way he was going home without it would have been if Scotty actually killed him. Suge fought back and Scotty kept shutting him down every chance he got until a reversal that stunned Scotty gave Suge just enough of an opening to hit him with a flying kick and cover him for the pin. The crowd roared with approval and Suge D became the new heavyweight champion. Fantastic work by both men and this new Scotty Young is going to be a force to be reckoned with, he really hit a home run in this match despite losing the bout. This match more than made up for the fact that it wasn’t what everyone was expecting and both guys became bigger stars in the fans eyes for it.

Animals was a fantastic start to a new year and a new direction for Resistance Pro. The new talent brought in a breath of fresh and the familiar faces once again proved why they have regular spots on the roster. It was a fantastic wrestling show and if they keep it up then 2015 should be a very good year for the federation.