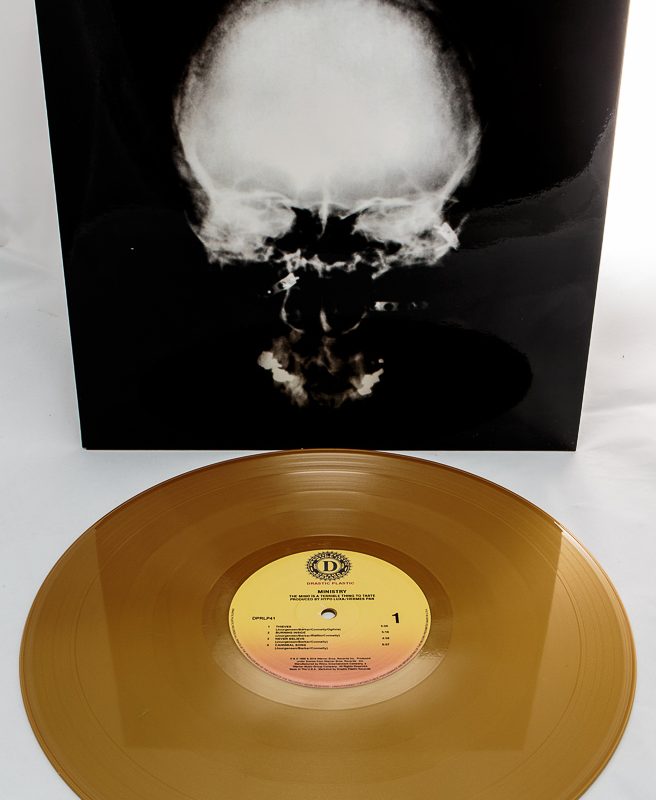 Ministry – The Mind is a Terrible Thing to Taste vinyl reissue 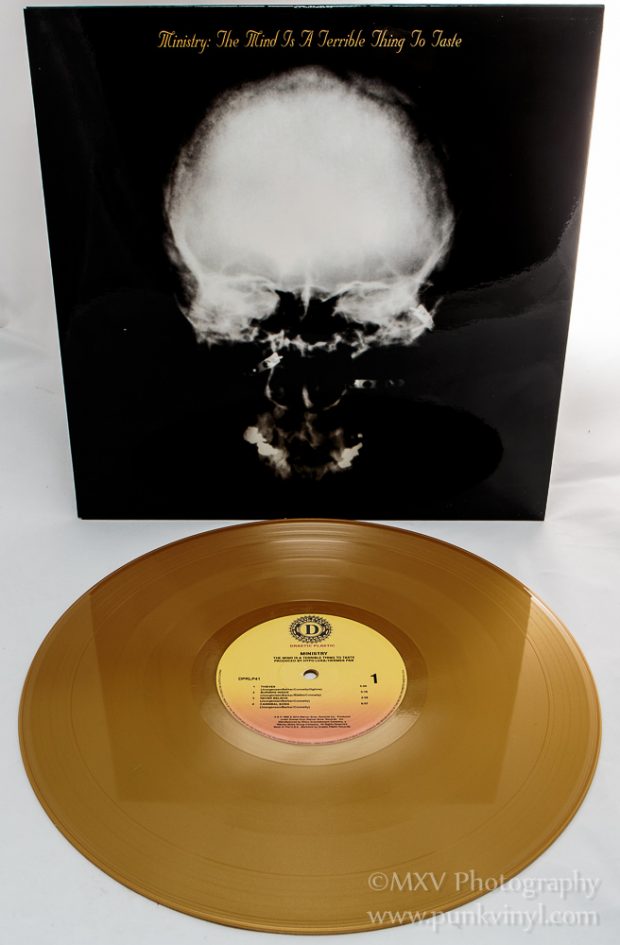 I can’t think of another band that took such a varied and strange musical path as Ministry did. The band that was the brainchild of Alain Jourgensen not only had a variety of members and collaborative partners over the years, but the sound of the band changed drastically through the course of the first decade of their lengthy existence. Ministry started out as a new wave synth-pop band before morphing into a dance-friendly industrial band, then to a hard-edge industrial rock band, and finally to a slightly industrial laced speed metal band. The only constant in Ministry over the years was Jourgensen. The band started off very successful with their début album and a slew of singles before switching labels and completely ditching that sound for industrial music where they were considered one of the “big two” industrial bands alongside Skinny Puppy. As the years progressed Ministry’s sound got harder and more abrasive and they reached their pinnacle with The Land of Rape and Honey and The Mind is a Terrible Thing to Taste. Industrial music had really exploded and Ministry and Skinny Puppy were playing to larger audiences at this time and then a band called Nine Inch Nails came along that was heavily influenced by both and threw in just enough accessibility in the songwriting to eclipse them both and reach super stardom but the fact remained that Ministry and Skinny Puppy paved that road and were the better bands. Ministry enjoyed even greater success with the release of Psalm 69 which many old timers viewed as their last truly great album though it ditched many of the industrial elements in favor of a more metal influence. After that album the band started going even more into speed metal territory and lost much of what made them so great during the industrial years. They still wrote some good songs but not with the frequency of the golden years.

The Mind is a Terrible Thing to Taste saw a focused Ministry that was truly on top of their game. The core band consisting of musical partners Al Jourgensen and Paul Barker filled out the band with a who’s who of contributors and additional members that included Chris Connelly (then of Revolting Cocks and Fini Tribe), Nivek Ogre (Skinny Puppy), Bill Rieflin, Martin Atkins, and more. The tour that accompanied this album was something of legend with all of these great musicians on stage playing the songs of Ministry behind a steel fence that spanned the width of the stage. The chaos was documented in the criminally out of print In Case You Didn’t Feel Like Showing Up video. It was also the loudest show I’ve attended in my life and I have the hearing damage to prove it.

The album was as perfect of an album as it got back then and nearly every song on it is considered a classic in the hearts of fans of that era of industrial music. It was the perfect blend of industrial beats, noise, samples, and aggressive guitars. Songs like “Thieves,” “Breathe,” “So What,” and “Burning Inside” are some of the most beloved songs in the Ministry discography. These songs have withstood the test of time and rival most music being produced today. Ministry inspired their share of imitators but no one came close to making the same kind of magic that Jourgensen and Barker created on this record.

Released in 1989, the album came out during a time when major labels were phasing out vinyl in favor of CD’s but they hadn’t yet abandoned the format and this album did have a vinyl release though it came and went long before Ministry released their follow-up album a couple of years later. It wasn’t available on vinyl again and original pressings have become collectors items. I rarely see copies of this for sale and when I do they are usually in poor condition and overpriced. As if they haven’t done enough for the vinyl loving community these days, Drastic Plastic proved again what great taste they have by giving this album a very high quality vinyl reissue and the real winner here is the fans.

The LP artwork was faithfully reproduced both front and back but printed on a higher quality glossy stock and the artwork has better contrast than the original pressing (the black is more black and the gold lettering looks better as well). The inner picture sleeve was also recreated on a glossy, thicker stock than the flimsy paper original. The record itself comes in a poly lined paper sleeve to prevent scuffs and the label art was also recreated with only some minor changes in label information. The record was mastered by Masterdisk. I played this back to back with the original Sire Records US pressing and they were quite close in sound quality but the mastering job on this reissue had a little more punch in the low-end which I ended up preferring when I went back and forth a bunch of times to compare. I liked the little oomph that this version offers. The vinyl comes in two configurations: 200gm black vinyl or 150gm gold vinyl. I am always more partial to color vinyl, especially when it compliments the cover art like this one does and it just looks better. Whichever version you choose, each is individually numbered out of 1500 copies on the back cover. This record is beautifully packaged and rivals the original pressing in every way and sounds better than the original CD. If you own this already it is worth double dipping for the improved packaging and slightly better sound and if you only own this on CD you need to fix that immediately! These should be available at most stores that stock vinyl but if not you can order one directly from Drastic Plastic Records. Another home run and if that wasn’t enough, they are working on The Land of Rape and Honey as well! Now if we can only get them to somehow license and remaster the Skinny Puppy catalog for vinyl reissues…