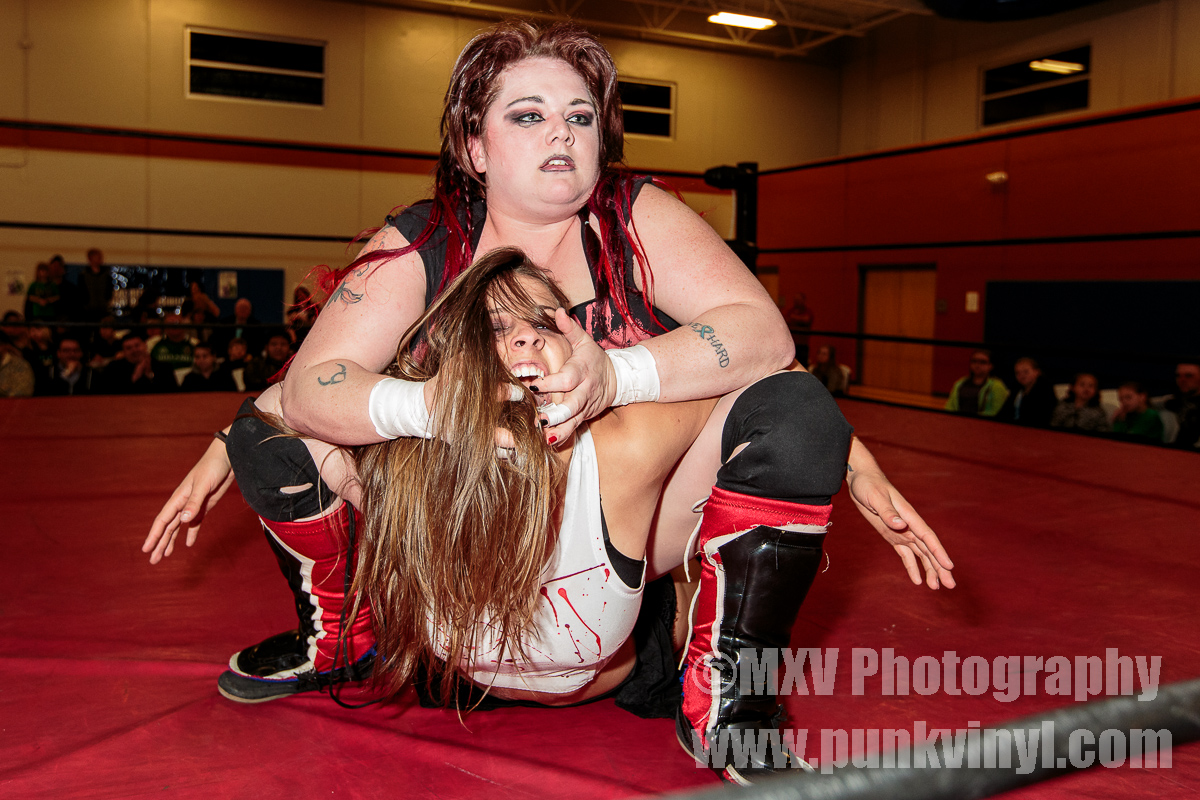 Resistance Pro Wrestling returned at the same time spring did (until today that is) with All The Colors Of The Dark. The show was headlined with a women’s title match between the company’s top two female stars and was filled out with some of the regular roster, some wrestlers making their return, and one making his début. The show was also a fundraiser.

Yabo the Clown made his Resistance Pro début against the returning Raphael King (with Devyn Nicole). The crowd seemed divided when Yabo came out with some fearing clowns and others loving them but once the match started he pretty much won them all over in the first two minutes. Yabo looked strong from the opening until some interference by Devyn allowed Raphael to turn the tables on Yabo for a bit. Yabo fought back and after some exciting back and forth action, Yabo did a tightrope walk along the top rope before jumping off to do a flying clown leg drop onto the prone Raphael. The crowd exploded with applause when this happened and Yabo got the win as he won over the entire audience. Raphael was furious and it wouldn’t be surprising if he demands a rematch in the near future.

In a mixed tag match, Pondo and the returning Hardcore Heather Owens took on Dash Sullivan and Lylah Lodge and Body Magic’s, Eric St. Vaughn was the guest referee. There was so much action in this match it was hard to follow. Dash and Lylah did their best to double team Pondo to try to wear him down enough to get the pin but he wasn’t going down easy and neither was Heather. In a bumbling twist of fate when Eric St. Vaughn tried to pull Pondo’s stop sign from Dash’s hands to stop him from using it as a weapon he inadvertently hit Pondo in the head with it and knocked him out, allowing Dash to make a quick cover. ESV reluctantly had to count to three and award the win to Dash and Lylah.

Masked man, Jacob Black faced Cody Jones in the third match. This match was short in length but long on high-flying action. Lots of cool moves from both men and the match concluded with a really cool roll up move by Cody that brought him victory. After the match Justin King and Cobra came out and explained to the crowd that at the last show Willie Richardson had broken Cobra’s jaw in their match and as part of their settlement with RPro management, Da Soul Touchaz are suspended until Cobra recovers and can return to action and when he does, Cobra gets Willie in a rematch and gets to choose the stipulation for the match.

Scotty Young invoked his rematch clause for a chance to reclaim the RPro title as he was pretty angry that he is the shortest title holder in history. Scotty’s run lasted about 20 minutes at the last show before losing the title to Suge D. Scotty’s anger was even greater this time as he attacked Suge D with a chair before he even had a chance to get in the ring to start the match. Scotty slammed it into Suge’s ribs and tried to choke him out with it too. When the referee was finally able to get Scotty off of Suge, Scotty dragged Suge into the ring and the match officially started. Scotty went to town on Suge trying to further injure his ribs and back so he could keep him down for a pin. Suge was in a bad way but kept fighting back. Scotty kept shutting him down but Suge showed that he had the heart of a true champion and kept fighting until an opening presented itself for him to nail Scotty with a flying knee and get the win. After the match Suge D was informed that Colt Cabana left a signed contract to face Suge at the next show which Suge promptly said he’d go back and sign, but not before he serenaded the guest of honor for the show, Sarah, who the show was a fundraiser for.

After the intermission, Rob Fury and Adam Bueller got the crowd’s excitement level back up with a fast paced match. Fury did some interesting moves and easily got under the crowd’s skin with his arrogant attitude. After a lot of flashy work by both men, Fury won the match and the crowd loved to hate him for it.

Sean Mulligan continued the St. Patrick’s day celebrating of the previous week going well into his match with Ryan Epic. Mulligan came to the ring drinking shots right up until the bell rang to start the match. He and Ryan traded blows and holds for a few minutes until Ryan started to really take control of the match. In a spot that was an ode to Popeye, Mulligan slid out of the ring and took another shot which gave him a second wind and he fought back and won the match. The crowd enjoyed every minute of it and many of them were drinking with him in spirit while sitting in their seats cheering him on.

In the main event, Mickie Knuckles put the RPro women’s title on the line in a no-DQ match against Crazy Mary Dobson. Mary has been on fire lately and that fire was in her belly as she gave Mickie the fight of her life. The two fought both inside and outside the ring. In one spot Mickie grabbed Mary by the legs and spun her in circles into the front three rows of chairs after the fans got up and made room for them to fight. Mary gave it right back to her by suplexing Mickie onto the ring steps. Inside the ring the two continued to beat the living hell out of each other until Mary put on her hockey mask and started headbutting Mickie. After a few shots from the mask Mickie was bleeding from the forehead but continued to put up a fight until Mary got the better of her and became the new Resistance Pro women’s champion. The crowd went completely nuts for this match, cheering on the moves of both women the entire time. This match is definitely a candidate for match of the year.

All The Colors Of The Dark was a really good show that was entertaining from start to finish and had good pacing. It also left the fans eager for the next show where they will see Suge take on Colt Cabana, among other great things.