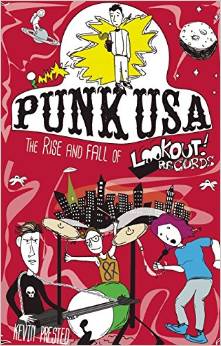 Punk USA: The Rise and Fall of Lookout Records

As a once avid reader of MaximumRocknRoll fanzine, I was well aware of the Gilman Street Project, a punk club the zine helped start. There was a healthy punk scene in the Berkeley area at the time with a lot of really good up and coming bands. I was very excited when MRR announced they were going to release a double seven-inch compilation, called Turn It Around, which documented the young bands that were regulars at Gilman. I bought it the week it was released at Wax Trax Records and played that thing to death. It had great bands like Crimpshrine, Isocracy, Operation Ivy, No Use For a Name, Sewer Trout, Corrupted Morals and more. This compilation was the début release for many of those bands.  I looked forward to hearing more from many of those bands and it didn’t take very long before I got my wish.

Within a year a new label started by Larry Livermore (who was in The Lookouts and was a columnist for MRR) and David Hayes called Lookout Records started releasing 7″ EPs by many of the Gilman St. regulars. The early records all had paper covers and had a similar look to them in the art style and each one of them was great in its own way. One of the bands from those early years really captured the attention of the world and that was Green Day. Green Day and Operation Ivy quickly became the most popular bands on the label and their records starting selling like crazy. This enabled the label to grow and put out even more great releases. Eventually Operation Ivy broke up and Green Day signed to a major label and became hugely popular with mainstream america which led to even more sales of their Lookout Records back catalog. Suddenly Lookout Records had to adapt from being a little label being run by some friends to a real business with contracts, overhead, and all the aches and pains that come with being a legitimate company.

Punk USA: The Rise and Fall of Lookout Records tells the story of the now defunct record label from its inception until the day it closed its doors for good. The story is split between oral narrative from the bands and some of the people who ran the label and additional narration that sets the stage for each chapter and story from the author. It reads like the book form of a documentary film. Oddly enough the two guys who started the label did not participate in this book but the people who took the label over when Larry Livermore quit and sold them the label, one of whom was there since nearly the beginning, were involved from start to finish. Many members of the various Lookout acts covered in this book participated as well and it reading the band’s version versus label head Chris Applegren’s version made for an interesting dichotomy which sometimes made Chris come across as rather dismissive of the various band’s statements.

The label went from rags to riches in a short period of time thanks mostly to the massive success of Green Day. The Green Day and Operation Ivy profits alone funded most of the label’s releases for years and as quickly as the money was coming it the label was spending it. The label was signing bands at a rapid pace and fronting them money for studio time and spending a lot in promotions as well, even going so far as to make videos for a few of the bands. The label had some other hits such as Screeching Weasel, The Queers, and the Mr. T Experience and I found reading the stories about the various troubles and drama with Screeching Weasel to be particularly interesting. Each story told about various topics was covered in a very satisfying detail.

In the foreword, the author stated that his initial plan was he wanted to write about every detail of every release but ended up having to cut much of that out to make for a better and shorter book. I think he made the right choice but I found it odd that at the end of the book he didn’t at least include a Lookout Records discography. It seems like that would have been a no-brainer, especially considering the sheer amount of research he did on all the releases. I would have loved an afterword chapter with a big “where are they now” so that readers could know what became of all these people and bands in the wake of Lookout going under. Those are my only two gripes however as the book was a fascinating read that taught me a lot about what went on behind the scenes at the label and how it and a string of poor decisions led to one of the largest independent labels of its time falling to pieces. I am not a fast reader by any means but I had such trouble putting this book down once I started reading it that I finished it a lot faster than I normally do. I really enjoyed it and I highly recommend it to anyone who is familiar with even a fraction of the bands on that label and/or the label itself. Weighing in at 191 pages it won’t take you that long to get through it and included with the great stories are photos of the various label workers, bands, and releases which helps put a mental image to the people and bands you are reading about. Kevin Prested did a great job on this book and it is something he should be very proud of.

Order the book from Amazon.com