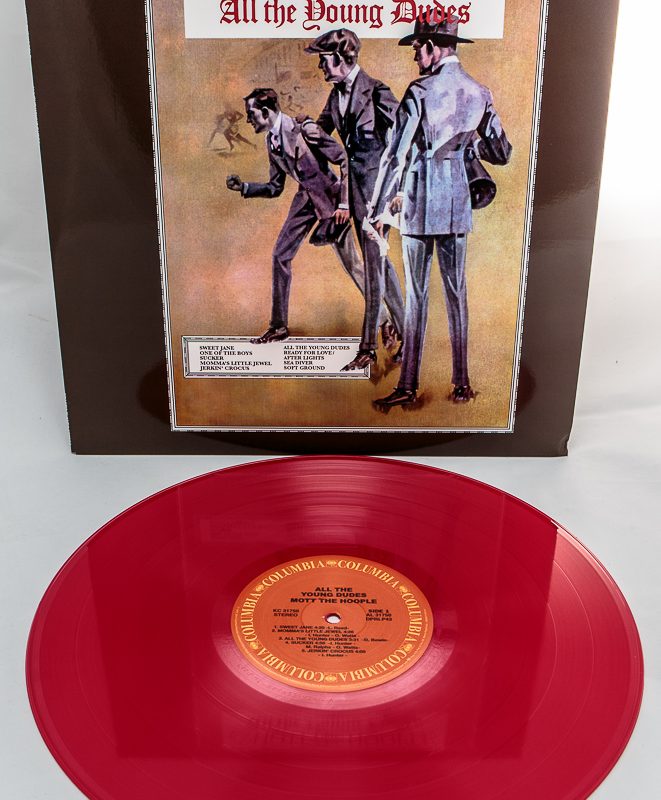 Mott The Hoople – All The Young Dudes vinyl reissue 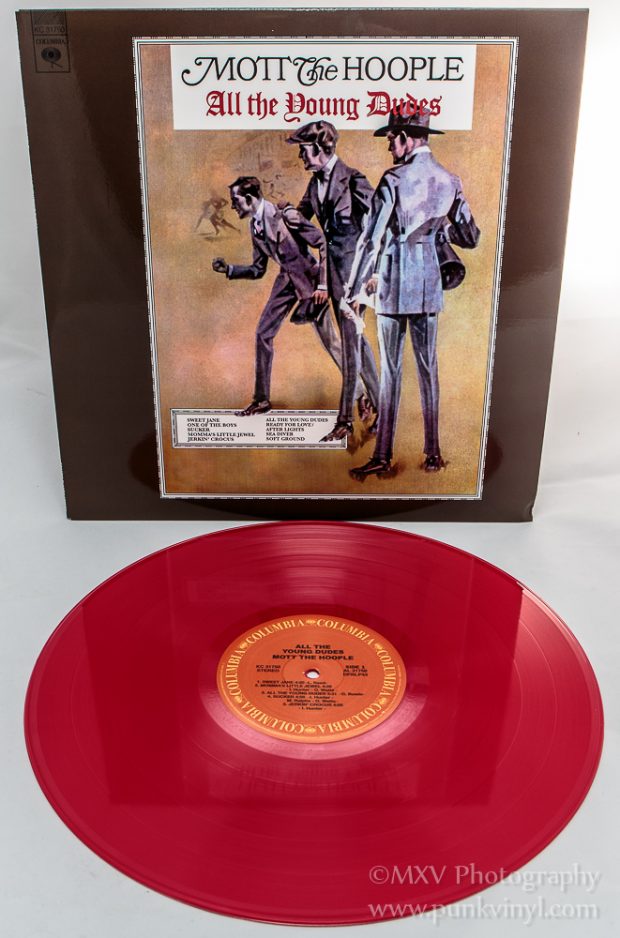 As I get older I find myself expanding my musical diet not by moving forward (because most new mainstream music is horrendous) but by looking back at the rock music I grew up with before discovering punk rock. Before punk rock changed my life I listened to a lot of Cheap Trick, AC/DC, Kiss, and rock music that was played on the radio. In my advancing age I’ve been revisiting this music that I’ve neglected for the better part of 30 years and it has been complimenting my normal musical diet.  There was a song I remember from back then called “All The Young Dudes” by a band named Mott The Hoople. The song was written for them by David Bowie, who later released his own version of the song. Bowie also produced the album the song was on, also titled All The Young Dudes. It was Mott The Hoople’s most popular album and the overall sound of the album has the Bowie influence all over it, which makes it no surprise that it is considered their best work.

All The Young Dudes was the fifth studio album by Mott The Hoople. The band was struggling at this point in their career and were about to pack it in when David Bowie wrote the title track for them and produced the album. The album went on to be quite successful and cemented Mott The Hoople in the glam rock movement of the time, which Bowie was the poster child of. On top of some great glam rock originals the band also did a really good cover of the Velvet Underground’s, “Sweet Jane” as the opening track for the album. It is really a solid rock album and is one that is now getting regular rotation now that a recent vinyl reissue has entered my collection.

The album was released by Columbia Records in 1972, making it 43 years old this year. It was available on vinyl up until around 1992 when it went out of print and was only available on CD from that point forward (this was when all the big labels abandoned vinyl in favor of the little silver discs with the huge profit margin). While you may be able to find old original copies they are likely to be pretty beat up. I know the records I owned in the 1970’s didn’t survive my childhood as I didn’t know how to properly handle them or take care of them. This is where reissues come in handy and Drastic Plastic is easily the premier reissue label in the United States these days and they’ve once again did a beautiful job with this reissue of All The Young Dudes.

The cover artwork was carefully and sharply reproduced on a glossy standard jacket. The record comes in one of those high-end poly sleeves to keep the record from getting scuffed. The label art was even faithfully reproduced on this one too. The record comes on either 200gm black vinyl or the visually superior 150gm opaque red vinyl which matches the lettering on the cover art. Each version is limited to 1000 copies and is individually numbered with a foil stamp on the back cover. The record was mastered by Kevin Gray at Cohearent Audio who always does an amazing job and this is no exception. I don’t own an original copy to compare this to but hearing this one is so satisfying that I don’t feel the need to ever own another copy of the album. It looks and sounds great.

If you have never owned this album, there’s no time like the present to pick one up on its intended format of vinyl while you can. If you aren’t familiar with Mott The Hoople but are a fan of early Bowie then it is a pretty safe assumption that you’ll really like this album. If your local store doesn’t stock it you can get one directly from Drastic Plastic Records webstore.