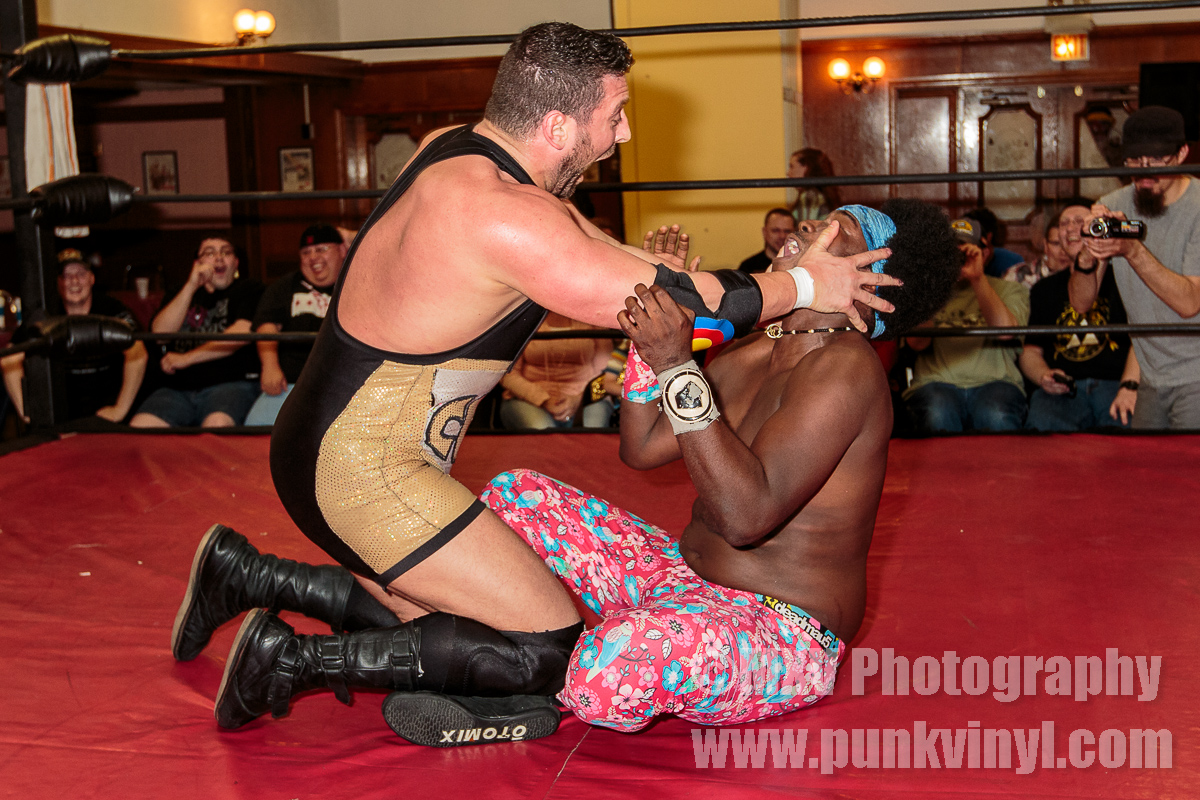 Resistance Pro returned on Saturday night to Summit, IL for the third time this year with Delirium. The show also marked the return of  Colt Cabana who had not stepped foot in a RPro ring in over three years! The show also featured two second generation wrestlers appearing for the first time in the company and some of the regular roster both old and recent.

Warden Myers came to the ring to start the show and informed the crowd that he left his position at the KOA penitentiary and has accepted a new position at Pridemore Women’s Prison. He said that while going through paperwork he found that Hardcore Heather Owens had violated her parole, was being remanded into custody and as a result, Mad Man Pondo would be on his own to find a new partner for his tag match that night. He went on to say that he has taken custody of a new prisoner as well who will be shown the ropes and debuting next show. As for Remi and Chris Hall, they have been moved to a halfway house due to their exemplary behavior and their new prisoner advocate has secured each a title shot against the RPro champion starting with Chris Hall at the next show.

Buddy Roberts Jr., son of the legendary Fabulous Freebird, made his Resistance Pro début as he faced fan-favorite, Sean  Mulligan. Mulligan got the crowd all fired up as he came to the ring swigging Jameson and toasting the crowd. Roberts was the heel in this match and the two had a really nice bout with good mat action and some good action spots as well. Buddy Roberts was able to use some dirty tactics to make his first match here a successful one for him as he stole himself a win at Mulligan’s expense.

Aniviel came to the ring for a short promo where she started telling the crowd all the things she found wrong with them and spouted some of her hippy nonsense before staging a sit-in. Her sit-in was short though as security quickly came and escorted her out of the venue.

The A.S.S., Rob Fury, was in the second match and faced Yabo the Clown. These two put together a really exciting match with some great back and forth action. Both men looked great and Yabo was looking to win the match but as he scaled the ropes to set up his finisher, Justin King came to ringside and hopped up on the apron and started yelling at him. The referee went over to try to get him out of there and while he did, Cobra slithered in from behind and leveled Yabo with his finisher. Fury took advantage of this and covered Yabo and yelled at the referee to turn around and count, which he did, to three, and Fury got the win. After the match was over, Justin King and Cobra came in and cut a promo. Yabo was robbed and you can bet he’s going to not only want a piece of Cobra at a future show but a rematch with Fury as well since Fury didn’t beat him, Cobra did.

Body Magic finally reunited to defend their tag titles against Mad Man Pondo. Pondo’s original partner was supposed to be Hardcore Heather Owens but unfortunately for Pondo she got picked up on a parole violation and carted off to Pridemore Women’s Prison. Pondo came out alone and got on the mic to announce that he found himself a suitable replacement and out came Shane Mercer! Shane is a beast in that ring and Pondo made a great choice in partners. The match was pretty high on the action and Eric St. Vaughn was conflicted during it as he respected Pondo too much to go along with Brady Pierce’s attempts to cheat themselves a win. This led to the two nearly coming to blows and ESV pushing Brady into the waiting clutches of Shane Mercer who pummeled him with a sick looking suplex, then hitting him with his finisher which made the crowd stand and give a huge applause. Your new tag team champions: Mad Man Pondo and Shane Mercer.

After a brief intermission John Skyler finally came back to RPro, ending a few month hiatus. He took the mic and started cutting down Chicago (and Summit) and said that there was no good competition out here so he booked his own in one Jackson James. He found himself a worthy opponent as James was no slouch in the ring and gave Skyler a run for his money in an old school type of match with good reversals and a slow build to some exciting ring action. Ever the crafty ring technician, Skyler hit James with his patented diving through the ropes spear and pinned him. It was one hell of a good return for Mr. Skyler.

As Andres the ring announcer was getting ready to announce the next match, RPro heavyweight champion, Special Dark Suge D’s music came on and he came out dancing around in the crowd. He took the mic from Andres and said that he couldn’t wait any longer and he OK’d it with management that he could have his match now. He called out Colt Cabana and when he came into the ring, Andres gave the match its proper introduction. Colt and Suge then went on to put on one of the most entertaining wrestling matches ever seen. They proved that “funny equals money” when they started trading holds and tried to make each other embarrassed. Suge turned a test of strength into a waltz before dropping Colt on the mat (he asked him to let him go) and then Colt took a hold and turned into a kiss right on the mouth. This led the crowd to start the first ever “this is awkward” chant which had everyone in the building cracking up. The fun didn’t let up from there but they also picked up the pace a bit and started some traditional wrestling. The match was very exciting and everyone in the audience was smiling. Colt was signalling that he was going to put Suge to sleep using his best friend, CM Punk’s finisher but but he picked Suge up and some heckler in the crowd yelled at him to use his own move, Colt turned and said “how about this?!” and twisted Suge up in his Billy Goat’s Curse submission hold instead. Suge fought like hell to get out of it and then suddenly the bell rang. Suge didn’t tap and both men looked puzzled, as did the referee, until the timekeeper informed them that the match exceeded the time limit. The match was declared a draw and afterwords Suge D said he didn’t want it to end that way and as long as he has the belt, he’d put it up against Colt again any time and plans to keep the belt as long as it takes to do just that. Every fan in the building that night would be more than happy to see these two go at it again. The two got a huge ovation and the crowd was still chanting for more.

For the final match, Crazy Mary Dobson had her first women’s title defense against Tessa Blanchard. Tessa is the daughter of Four Horsemen legend Tully Blanchard so you know wrestling is in her DNA. These two ladies had a fast and furious match and the action went all over the ring and even out on the floor. These two traded blows and holds relentlessly and seemed to be really evenly skilled. This match was so entertaining and so full of good ring work that it could be used as an example of how women’s wrestling can and should be held in the same regard as men’s as here you had two very attractive ladies who can wrestle circles around anyone up in the big leagues and both of these ladies are destined to become future superstars. After close to 15 minutes of non-stop excitement that had the crowd chanting for both ladies, Crazy Mary was able to hit her split legged moonsault off the top rope and retain the title. It was a great way to finish off the show.

After the match, color commentator Sarah Shockey came to the ring to inform Crazy Mary that next month she will be defending her title against “blue pants” Leva Bates!

Delirium was the best Resistance Pro show of this year and the best one they have had in quite some time. The company seems to be rapidly finding their groove this year after the changes the company went through and they appear to be better for it! Their next show is Saturday June 20th in Midlothian, IL and it is a safe bet that it will be every bit as entertaining as Delirium was.