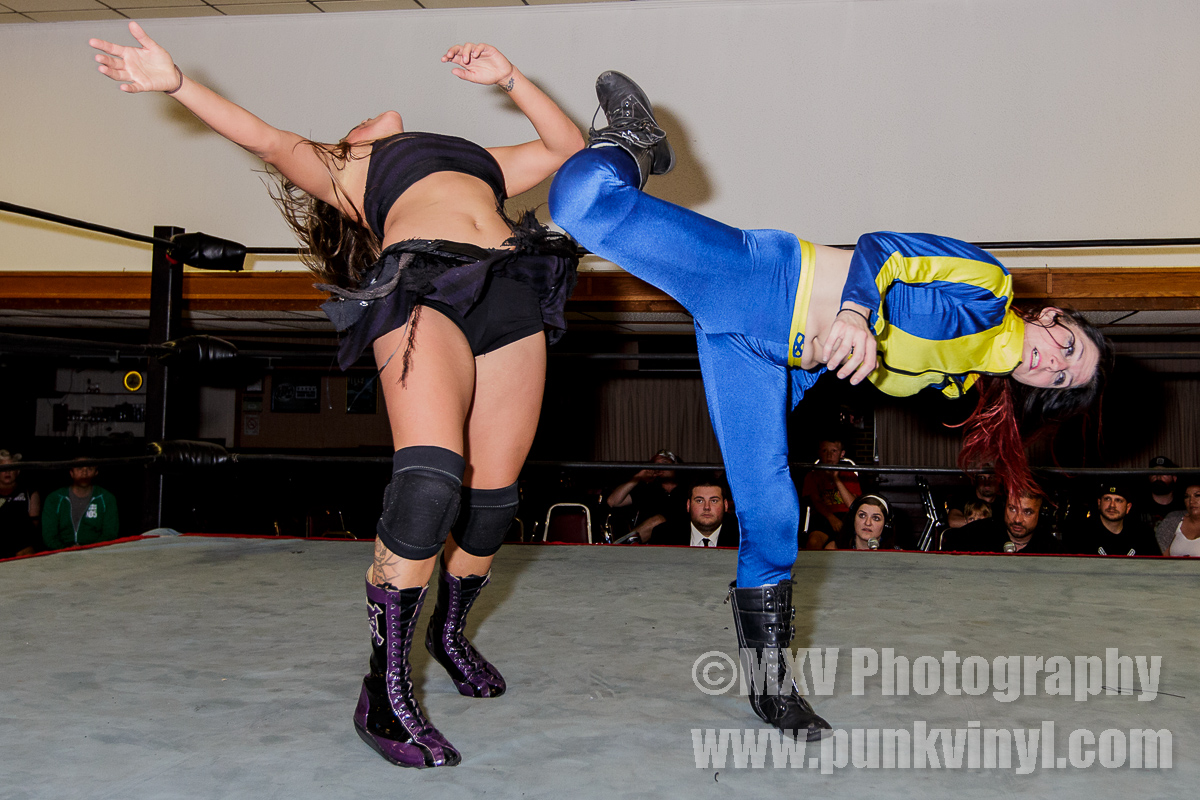 Resistance Pro kicked off the summer in Summit on Saturday night by having their third show in a row being headlined by a women’s wrestling match. Women’s wrestling has always been heavily showcased in RPro and they have a lot of very talented ladies on the roster which made it a no-brainer for them to really showcase the fact by putting the women’s title matches in the main event. The show featured a couple of new faces along with some of the regular roster and featured three title matches.

Before the show started, Scotty Young came out to the ring and hijacked a microphone to inform the crowd that Chris Hall (who was scheduled to challenged Suge D for the heavyweight title) couldn’t make it so as a former champion he was taking the opportunity to challenge for the belt and will be wrestling Suge D later that evening in hopes of reclaiming his lost gold. When the show started, Eric St. Vaughn came to the ring and delivered a promo talking about the past of RPro, how long he’s been part of it, and how much it means to him. It was a very good promo, full of genuine emotion. He then went on to say that Eric St. Vaughn was a character foisted on him that he felt he needed to be but he was no longer interested in living a lie and that from now on he will be known by his real name, Tommy Else. The crowd was behind him and gave him a big round of applause.

Sean Mulligan had a chance for a rematch against Buddy Roberts Jr. in the first match since Buddy got a victory against him in a less than ethical way last show. The match was high on the action and Sean started out strong. Later in the match when Buddy was in control (again brought on by some cheating) and Sean tried to crawl to his bottle of Jameson to take a swing from and “Hulk up”, Buddy grabbed the bottle and poured it out in the trash. Thinking he had the match in the bag, he went back to attacking Mulligan until he crawled over to the announcer’s table and found a flask underneath Sarah Shockey’s script (who knew she drank on the job?!), took a big swig and then much like when Popeye eats his spinach, turned the tables on Buddy and got the win. After the match Sean said they each had a win against the other two and if he’s up for it, he’d like to have one more match next show to settle the score once and for all. When he extended his hand out to buddy to shake it, Buddy waved him off and walked out of the ring and left.

In an “anything goes match”, Cobra (with Justin King) made his return to get a little revenge on Willie Richardson, who put Cobra out of action for  the first half of this year when he broke his jaw in a match at the January RPro show. The two men did battle both inside and a lot on the outside of the ring and it was a really good brawl. Cobra found a baseball bat which he used on Willie outside the ring which softened him up a bit but it still took more fighting back in the ring along with using the bat a second time when Justin King handed it to him to keep the big man down after hitting a home run on Willie’s head. Great fight by both men and seeing as it took two men and a bat to keep Willie down, don’t be surprised if these guys cross paths again sometime in the future.

Devyn Nicole and Aniviel teamed up (reluctantly at least on Devyn’s part) in a tag match, though they didn’t know who their opponents would be. After they came to the ring, Warden Myers came to the ring with Hardcore Heather Owens and another woman whose head was covered in a black bag. The warden talked up his new position at Pridemore Women’s Prison and said that there was some new meat came in and he has high hopes for her. He then pulled off the bag to reveal the new prisoner was Paloma Starr! What this happy-go-lucky lady did to land herself in prison was a mystery to everyone other than the warden but it will likely be revealed in the future. The tag match started and Heather and the warden were livid when Paloma was being too nice in the match. They wanted her to toughen up and become vicious but she wouldn’t do it. The result of her refusal led to her being pinned and losing the match for Pridemore, which made the warden furious. Heather said not to worry, that she’d toughen up the “new meat” and promised something like this wouldn’t happen again.

Special Dark Suge D put his heavyweight title on the line against Scotty Young. These two were very familiar with each other as they have faced each other for the title in the past. This year, Young has really stepped up to be a main event player and that was even more evident in this match. These two had an incredibly strong match and Scotty was downright vicious in trying to take apart Suge D. He looked to be doing just that too but Suge hit a quick roll up on Scotty and the referee counted to three and failed to see that Scotty’s foot was on the ropes! The referee wouldn’t listen to Scotty’s protests after the bell rang and while Suge D was congratulating himself and talking to the fans after the match, an enraged Scotty came back out and attacked him. He tied Suge up in a what looked like a modified sharpshooter and wouldn’t let it go. Suge was in agony until Tommy Else jumped up from the announcer’s table (where he was doing guest commentary for the night) and made the save. Great work by all involved and this feud between Scotty and Suge will only heat up more from here.

Rob Fury took on Raphael King (with Devyn Nicole) in the first match after the intermission. Fury had a bucket of champagne set up at his “VIP table’ near the DJ and said he was going to party all night long. These two men were a lot alike in their arrogance and showmanship and spent the better part of ten minutes trying to show up each other in a match that traded holds and moves regularly which had the fans really excited. When things moved into the huge move category, after trading even more of them back and forth, a winded Fury walked over to his VIP table and invited Raphael and Devyn to join him. Fury said they shouldn’t be fighting, they should be joining forces. King and Devyn took him up on his offer and the ref called for the bell to end the match. Fury, King, and Nicole partied at the VIP table during the next match (which was for the tag titles) and declared they were better than the champs.

Mad Man Pondo and Shane Mercer defended their tag titles against Cody Jones and the newcomer, Zodiac. Zodiac’s gimmick was similar to Abyss in that he was a big, deranged, masked man. Zodiac was accompanied by Eryn who made her managerial return after a lengthy absence, which she likely used to find herself this new client. The match was high on action and at one point, Pondo got busted open by Zodiac which just seemed to make him want to fight even more. Zodiac attacked Pondo outside the ring while Mercer and Jones were the legal men fighting in the ring and Mercer took control of things inside which allowed him to nail his crowd pleasing, moonsault and battery, finisher. After the match, a still angry Pondo challenged Zodiac to a “fans bring the weapons” hardcore match next show (Aug. 1st)! The fans will be the real winners for this one and it will be the first of its kind in the company.

Last show, Crazy Mary Dobson and Tessa Blanchard showed the world why they deserved to be the headline match of the show and if that left any shred of doubt in anyone’s mind that women’s wrestling is as main event as men’s is, then Mary’s match this evening with Leva Bates erased it. These two wowed the audience from start to finish with a great array of holds, flying moves, kicks, chops, reversals, and everything else you can imagine both inside and outside the ring. Leva Bates was pretty flexible and delivered some really impressive kicks and had no problem taking it to the sky to jump off the ropes or out of the ring when needed. The match had the crowd cheering for both ladies and gave everyone their money’s worth and then some. After about 15 minutes of non stop excitement, Crazy Mary hit a really impressive fisherman’s suplex off the second rope to get the win and retain the title. After the match was over, announcer Sarah Shockey came to the ring to inform Mary that she had better be “death proof” because at the next show she’ll be facing Jessika Havoc! The crowd loved the sound of that and roared with approval.

Split Second was a great way to start summer and featured great matches and some good storyline development. The next show already looks to be even more exciting as well!