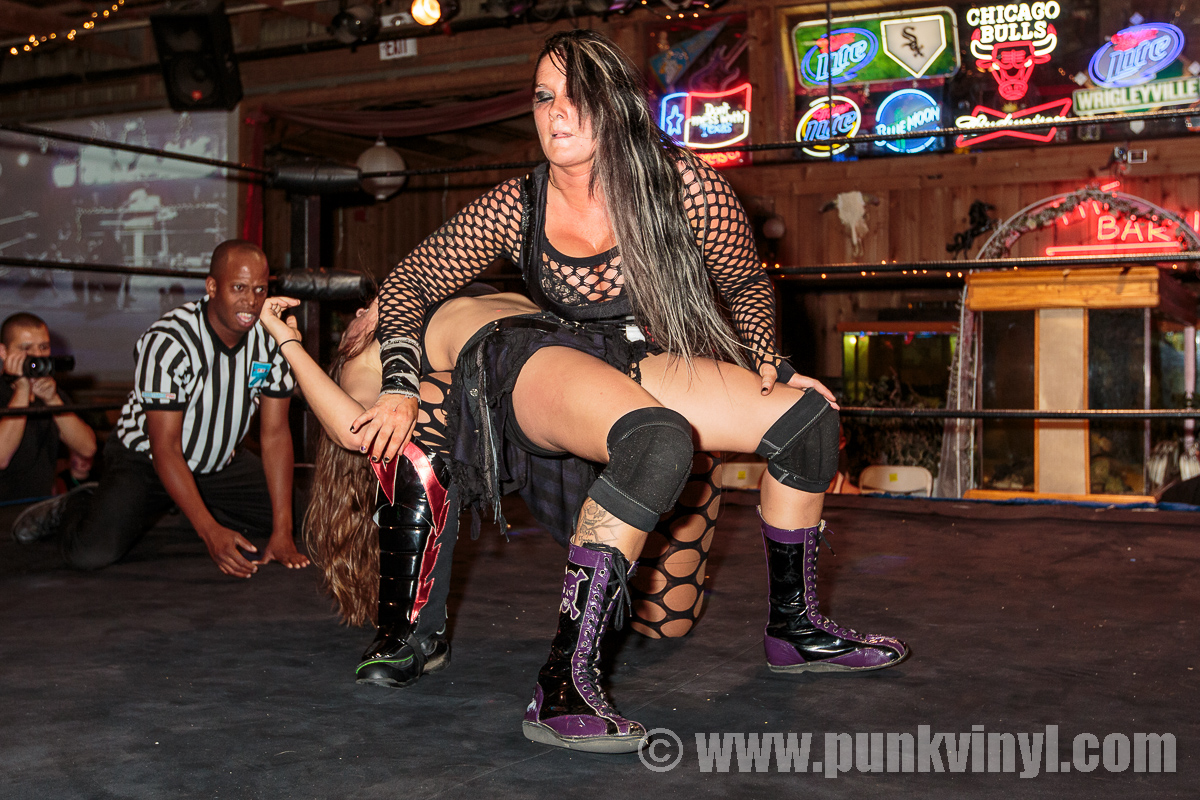 Resistance Pro returned to the familiar confines of the Barn at Arabian Knights in Willowbrook Saturday night with Death Proof. It was a hot summer night which meant it was hot in the barn both in temperature and wrestling action. The show was headlined by another women’s title defense by Crazy Mary Dobson, this time putting her title on the line against one of the largest and most powerful women superstars today. The show also featured the début of a couple of recent additions to the RPro roster.

First up, the undefeated Cobra (with Justin King) faced the Neon Ninja Facade (with Dani) making his RPro début. Facade is a high flyer and this match was heavy on the action. Facade had control for much of the match which frustrated Cobra to the point that he would often leave the ring to regroup and consult with Justin King, and the two of them took to some cheating as well to gain the upper hand. During the back and forth, Justin King hopped up on the apron to try for some interference but was stopped by the referee. While this was happening, Yabo the Clown came out from backstage and squirted liquid into the eyes of Cobra from a flower on his vest. The blinded Cobra turned back around to walk right into Facade’s finisher. Facade won the match and Cobra blew his undefeated streak that has lasted for years. He and Justin King were furious for “being robbed” but they were owed one after they cost Yabo his match two shows back by attacking him. Clown payback can be a bitch!

With their series tied at one each, it was time to end the series with a definite winner and in their final match, Buddy Roberts Jr. and Sean Mulligan were also fighting for a spot in the Sam Thompson Memorial Tournament to be held next month at Rolling Thunder. Both of these guys wanted victory bad to show up the other man and get a shot at the title in the tournament and they brought everything they had. After a lot of near falls and reversals by both men, Mulligan went for his trusty bottle of Jameson but was cut off by Buddy. Mulligan then went for his backup flask and that too was thwarted but Mulligan planned for that too. He reached into his boot and pulled out the biggest flask ever made (it was damn near as tall as his boot was) and started swigging from it. Some more great wrestling between the two men followed until Mulligan was able to hit his finisher and get the win. Excellent match that easily topped their previous two bouts and was a fun ride from start to finish.

In the third match, Gory made his début against the Arrogant Super Star, Rob Fury. Rob had his VIP table set up near the ring as well. Gory made one hell of a great début with tons of amazing moves that showcased his speed and agility. Fury was no slouch in there either but it did take some cheating to win the match which kept his streak going and cheated Gory out of a win in his first RPro bout. Don’t be surprised if these two tangle again sometime soon.

Heavyweight champion Special Dark Suge D and Tommy Else faced the team of Scotty Young and big Russ Jones in a tag match. Suge and D came out with all guns blazing but were soon picked apart by Scotty and Russ. When Tommy Else unsuccessfully tried to body slam the monster Russ, he was pounded to the mat and lost after a huge splash by the big man. Scotty and Russ hopped out of the ring and Scotty was gloating that he got the one-up on the champ.

Yabo the Clown took on Cody Jones after the intermission. These guys had one of the best matches of the night that showed just what a serious contender Cody Jones is and just how crafty and resilient that Yabo is (on top of being hugely entertaining). The crowd didn’t know what to make of Yabo at first but after some of his various moves and antics, they were chanting for him to make a comeback when Cody was in control. Highlights included Yabo declaring “it’s hammer time” then pulling out an inflatable hammer and hitting Cody with it, standing on the top turnbuckle when Cody was tied to the “tree of woe” and juggling balls above him before throwing them at Cody’s head, and of course his tightrope walk leg drop finisher from the top rope. It was an exciting and entertaining match that was a true highlight of the evening. When the match ended, Sarah Shockey tried to interview Yabo but before he could really get much out, Cobra and Justin King “Pearl Harbored” him and gave him a beat down in retaliation for Yabo costing them their match earlier that night.

In RPro’s first ever “fans bring the weapons match” Mad Man Pondo and Zodiak (with Eryn) used everything but the kitchen sink to beat the holy hell out of each other. At the start of the match, Pondo walked through the crowd and collected various weapons that included bats, an oar, drum heads, cookie sheets, and even a paper airplane! The two men went to town on each other in a short but sweet little hardcore match. Pondo was bloodied by a cheese grater to the head by Zodiak but not before staple gunning the masked man in the nuts. Zodiak also staple gunned a dollar bill to Pondo’s forehead that stayed there until it getting cheese grated off. The fans popped big for each spot and winced as the two combatants tried to kill each other. Mad Man Pondo ended up victorious and proved he is still the man when it comes to hardcore matches.

In the main event, Women’s champion, Crazy Mary Dobson, defended her title against recent TNA superstar, Jessicka Havok. Havok is a beast and was about double the size and height of Crazy Mary but Mary loves a good fight and wasn’t intimidated by her. Crazy Mary found out the hard way that she was going to have to get creative in her offense if she was going to get Havok off her feet and after absorbing a lot of punishment, she found some openings to get Havok down a few times. Havok was easily as strong or stronger than most males and she gave Mary one hell of a fight and kept coming at her with more. Eventually Mary was able to get Havok down long enough for the three count and she retained her title.

After the match ended, Mary said she’s a fighting champion and instead of watching the ladies at the next show fight in a tournament to face her later, she was entering herself in the tournament and putting her title on the line. This prompted Suge D to come out and do the same for the men’s tournament at the Samuel Thompson Memorial Tournament, Rolling Thunder on September 19th in Lockport. As they were leaving, Scotty Young attacked Suge D from behind with a back stabber and then grabbed a mic and said, “guess who else is in the tournament next show?” and said that at Rolling Thunder he’s finally taking back “his title”.

Death Proof was a fantastic show. The fans loved it and they really set the stage for some very exciting angles heading into the fall. It was a show that anyone not there should be ashamed that they missed!

All photos in this post by Jason Defillippo. To see additional photos from this show, click here!