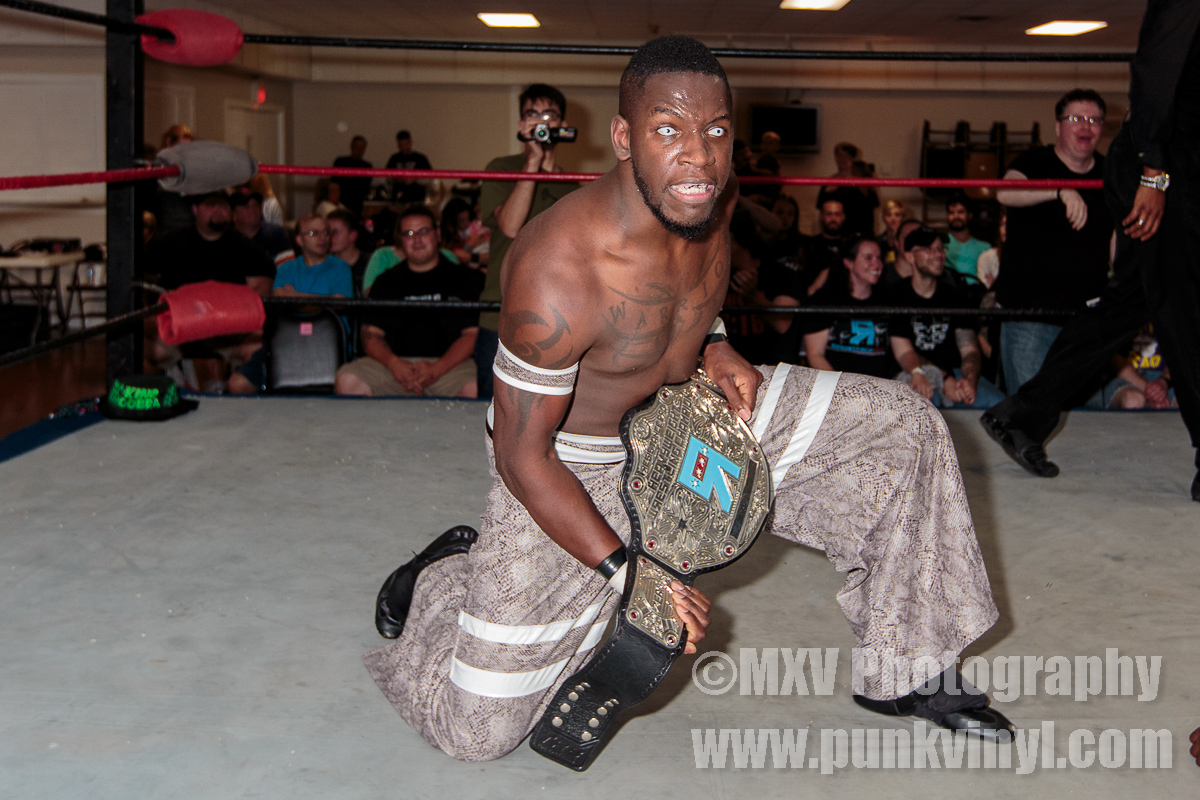 Saturday night wasn’t just another show for Resistance Pro, this one had special meaning. Rolling Thunder was the third annual Samuel J. Thompson memorial tournament show. Sam Thompson was the most beloved member of the Resistance Pro family who lost his battle to cancer during the first year of the company’s existence. To honor his memory, the company has held these special event shows to pay tribute to someone who inspired everyone he met in life. This year they held a pair of tournaments, one for the Women’s title and one for the heavyweight title, and each champion entered themselves into the tournament to defend their title!

The first match of the night was also the first in the heavyweight title tournament. Yabo the Clown squared off against former RPro champion, Scotty Young. Yabo got a huge reaction from the audience and they cheered for him the entire match. Scotty was a man on a mission as he wanted nothing more than to reclaim that title. Yabo got off to a really strong start before Scotty later turned the tables on him and turned up the intensity. Yabo fought like hell and even found time to juggle during the match but the determined Scotty was able to get himself a hard-fought win. After the match the crowd was still chanting for Yabo! They absolutely loved him.

In the first match for the women’s version of the tournament, Angel Dust made her return to RPro and faced Leah Von Dutch. The two started out both wrestling like babyfaces and shaking each other’s hands after a particularly good counter or series of moves. A few minutes later when Leah went to shake Angel’s hand again, Leah kicked her and started fighting dirty. The crowd instantly turned on Leah and the girl got great heat the rest of the match. Angel Dust is quite a fighter and she may have had her best match yet in RPro this evening. The two had a solid match that really had the crowd captivated and vocal the entire time. Leah got the win with her “Dutch clutch” submission to advance in the tourney.

Tommy Else issued an open challenge to anyone in the RPro locker room to come and have a match with him. When Tommy asked who was going to answer his challenge, BD Smooth came creeping out to the ring. The fans were laughing and Tommy couldn’t believe he was serious. When BD came in and the referee rang for the bell, it became quite apparent that Mr. Smooth was totally serious. The match was short in length and tall in comedy. BD tried to beat Tommy in a test of strength and promptly found himself on the painful end. He broke the hold by trying to kiss Tommy on the mouth which could be the first time in wrestling history that a test of strength was countered with that. Smooth then tried to bounce off the ropes and hit Tommy with a shoulder tackle but only ended up knocking himself down. A dumbfounded Smooth then hit the ropes a third time and tried a clothesline but Tommy ducked it then nailed him with a lung blower and pinned him. This match was 100 percent comedy relief and everyone in the audience was laughing the whole time.

In the second match of the women’s title tournament, the champion herself, Crazy Mary Dobson, faced Hardcore Heather Owens (with Warden Meyers in her corner). Heather is obviously a thuggish bully in her prison which the warden seems to be quite proud of. Mary’s skills are varied and strong and she put many of them to use to stay ahead of Heather for much of the match. Cheating helped Heather’s cause quite a bit throughout the match but Mary was able to overcome it all when in the end when Heather couldn’t break a submission hold on her own, she got the nightstick from the Warden and hit Mary with it, costing herself the match but probably strengthening her reputation in her cell block.

Heavyweight champion, Special Dark Suge D and Sean Mulligan were in the next match as part of the tournament. Both of these guys are big fan favorites and their match was not only full of action, but full of fun. The match started with trading some holds before it somehow got interrupted when both men decided to have a dance off in the middle of the ring. During the dance off each wrestler danced how they thought the other person would dance and it was hilarious. That came to a conclusion a couple of minutes later but not before Mulligan got stuck in the splits and Suge danced with the referee.  After that they got two chairs and had an “Irish debate” where they took turns hitting each other in the face. During the debate, Mulligan kept taking swigs of his bottle of whiskey before taking his turn which made each hit stronger with the more he drank. Suge was knocked completely out of his seat which ended the debate and then it was back to traditional wrestling. The action was fast and furious once that happened and Suge managed to hurt his knee during the match but still was able to hit a roll-up on Mulligan and advance in the tournament. This match was so much fun that people were still talking about it after the show.

After the intermission a rematch eight months in the making finally took place when Rob Fury and Shane Mercer finally got back in the ring together. Their first match back in January went to a time limit draw and received a standing ovation from fans who wanted to see more and this night they got their wish. These guys took everything that made their first match so special and turned it up a couple of notches. Lots of great back and forth action and lots of fighting outside of the ring around the ring and on this mini stage in the corner which saw Fury get back dropped onto, only to come back and hit a rana off the railing! The fans went crazy. When the action finally ended up back inside the ring, Shane was poised to hit his finisher on Fury (even despite the abnormally low ceiling) but Fury wiggled free and ran away, letting the referee count him out. Fury was elated that he got counted out and started celebrating the fact that in his eyes, count outs mean nothing and he wasn’t pinned, therefore Shane still can’t say he beat him! The fans were pissed at him for taking the chicken way out but not as pissed as Shane was. This isn’t likely to be the last chapter in the Fury/Mercer book and it is a safe bet to think the real winner of this will be the fans.

In the final match of the heavyweight title tournament, Suge D faced Scotty Young. These guys have been feuding over this belt for most of this year and Scotty was determined that this was his night to finally get that belt back. These guys put on one hell of a great match. With Suge being injured, Scottty Young wasted no time going to work on Suge’s knee and leg which greatly diminished Suge’s offensive capabilities. Suge had heart though and kept fighting and he tried his best to work with what he had left. After about 20 minutes of near falls and breathtaking wrestling action that had the fans rallying for Suge harder than they ever have, Suge threw a hail Mary pass in a flying knee and was able to connect hard enough to keep Scotty down for the three count. Battered and exhausted, Suge got a mic and was starting to give a little speech when he was interrupted by Cobra and Justin King.

The two men came to the ring and Justin yanked the microphone out of Suge’s hands. Justin informed everyone that as part of their settlement with RPro over their negligence that led to Cobra’s jaw being broken, they were granted one title shot any time they wanted to redeem it and they were redeeming in now. Suge was shocked, but not as shocked as the fans. How could Suge face yet another top competitor in his current shape? The answer was he couldn’t as no mater how hard he fought, Cobra was able to pick him apart and beat Suge down until he couldn’t get up anymore. Suge was pinned and Cobra became the new champion.

Elated, King and Cobra were celebrating in the ring but were then interrupted by Yabo. The crowd went nuts when he came back out. Yabo had some balloons in his hand as he entered the ring. He then squirt water into Justin King’s eyes from his squirting flower and then popped a balloon in Cobra’s face which stunned both men. Yabo then started cackling as he left the ring saying he was coming for them and he aided the now former champion to the back. The crowd went nuts for all of it and the entire series of matches told a story that captivated the fans throughout the entire thing. It was perfectly played by all involved.

In the final match of the evening, Crazy Mary Dobson and Leah Von Dutch did battle to see who would be the women’s champion in the conclusion of that tournament. Leah had a ton of heat from her previous match and Mary seemed to just be getting started in her first bout and brought even more to the table for this last match. These two ladies wowed the audience with their great skills and put together a very exciting match with some cool near falls and submission holds. The match came to an exciting conclusion when Mary locked a submission hold on Leah who wasn’t able to escape and eventually passed out. The referee raised Leah’s arms three times and Leah didn’t respond to any of them and he had no choice but to end the match. It was a great ride from beginning to end.

Rolling Thunder was easily the best Resistance Pro show of the year, a suitable feat as it was paying tribute to such a special person. It was a great way to end the year for the company and they have some really exciting stuff to build on when they return which will be well worth the wait!