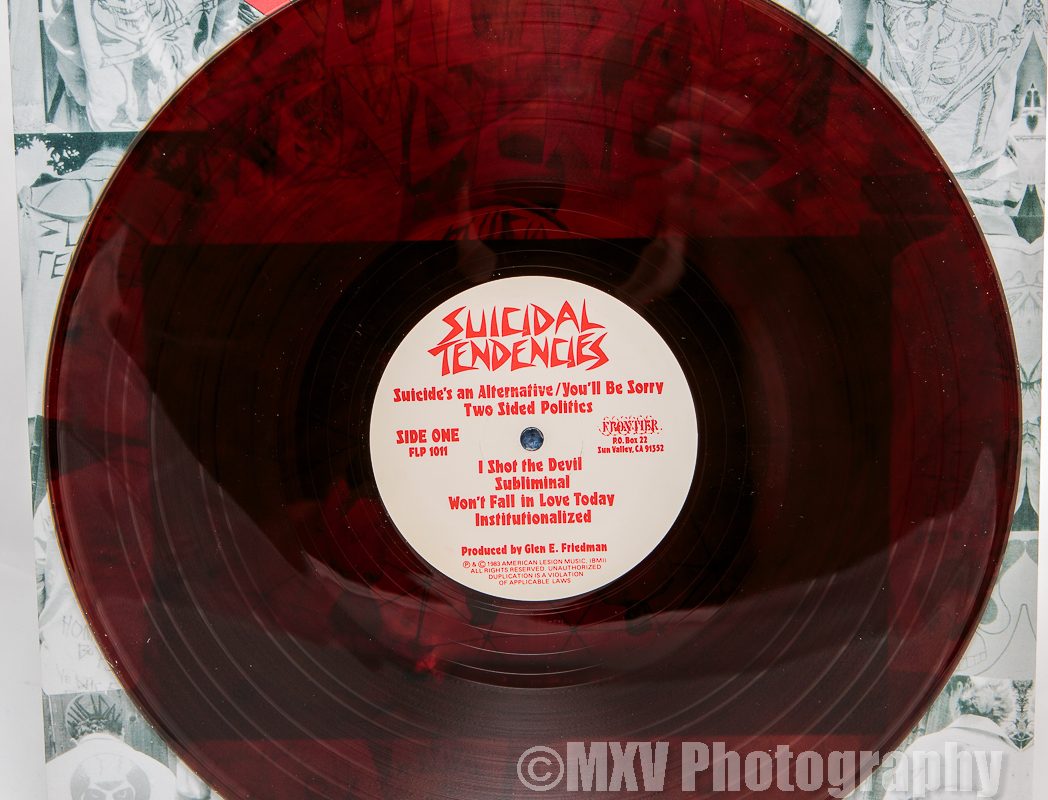 To many, punk rock and drinking go hand in hand. “Someone give me a beer” was Darby Crash’s most famous quote. Murphy’s Law often sang about drinking, Gang Green made an entire career based on it and at shows you don’t have to look very far to find someone drinking their favorite spirits. Hell, back before I was shooting shows I would enjoy drinking at them, sometimes too much. I can distinctly remember drinking so much at a Discharge show somewhere on the south side about 12 years ago that I remember nothing about the show itself and only remember how sick I was the next day. Those were dark times my friends!

Seeing the close link between booze and punk rock, it seems only natural that someone would offer some records on bourbon colored vinyl and that’s just what Frontier Records did. They offer not just one, but three of their titles on this boozy color of vinyl, all of which were the début albums for these bands and the best things that each one ever recorded.

Suicidal Tendencies is still around today in some form with only the lead singer Mike Muir being an original member. They never put out an album that came even remotely close to the greatness of their self-titled début. I’ll admit that their third album, How Can I Laugh Tomorrow…” was actually a pretty good record but if you put me out in the ocean on a boat and I had to choose to save the life of only one of those records that third album is going right in the water! The band also had the distinction of being one of the first punk rock bands in the 1980’s to have a video shown on MTV, which made every jackass on the planet ask me if I wanted a Pepsi because my name just so happened to be Mike. The Mike in the song had the worst taste in soft drinks because as The Faction knows, Coke was the superior beverage! Inferior cola aside, the first Suicidal Tendencies album is legendary and has to be one of the best-selling punk rock albums in history at this point.

The Adolescents are still around too and they even toured this year. Sadly I missed it but they feature more than one original member and they even still occasionally release new albums and when they do they are good! These guys are also legendary, as is their self-titled début album, lovingly referred to as “the blue album”. It is OC punk at its finest. These guys were punk rock pioneers and created that OC sound that made waves around the world and fueled a lot of skate sessions in my teenage years.

Christian Death may have invented death rock, at least in the United States. The original Christian Death was unlike anything to ever come before it and while they were under the punk rock umbrella back at the time of their début album (that umbrella was larger than it is today), they were so much more. That album, titled Only Theatre of Pain, put death rock on the map, created a new sound, and is simply one of the best records ever. Sadly that version of Christian Death was short-lived. After the release of this album, most of the members left and Rozz briefly carried on the name with some new members, one who would go on to take the name and continue as Christian Death after Rozz left and release records featuring no original members for decades. That Valor guy even won the rights to the name in a lawsuit between him and Rozz! There was a time when both Christian Deaths were on tour when the real one reunited to play some shows. Those were confusing times if you weren’t hip to what was going on but there is no denying how great that first album is and how there should be one in every home.

Just like a good drink doesn’t last long (because you will gulp it down), these bourbon colored (but not flavored) records are only here for a limited time before they will sell out and appear on a new color. At some point they may have to invent some new colors to keep the variety going with these great albums but in the meantime if you want some booze colored records, head over to the Frontier Records website and take a shot before it’s too late. The price is right, especially compared with some labels who are charging almost double for their records, and the service is even better and in this case you won’t even have to tip your vinyl bartender.