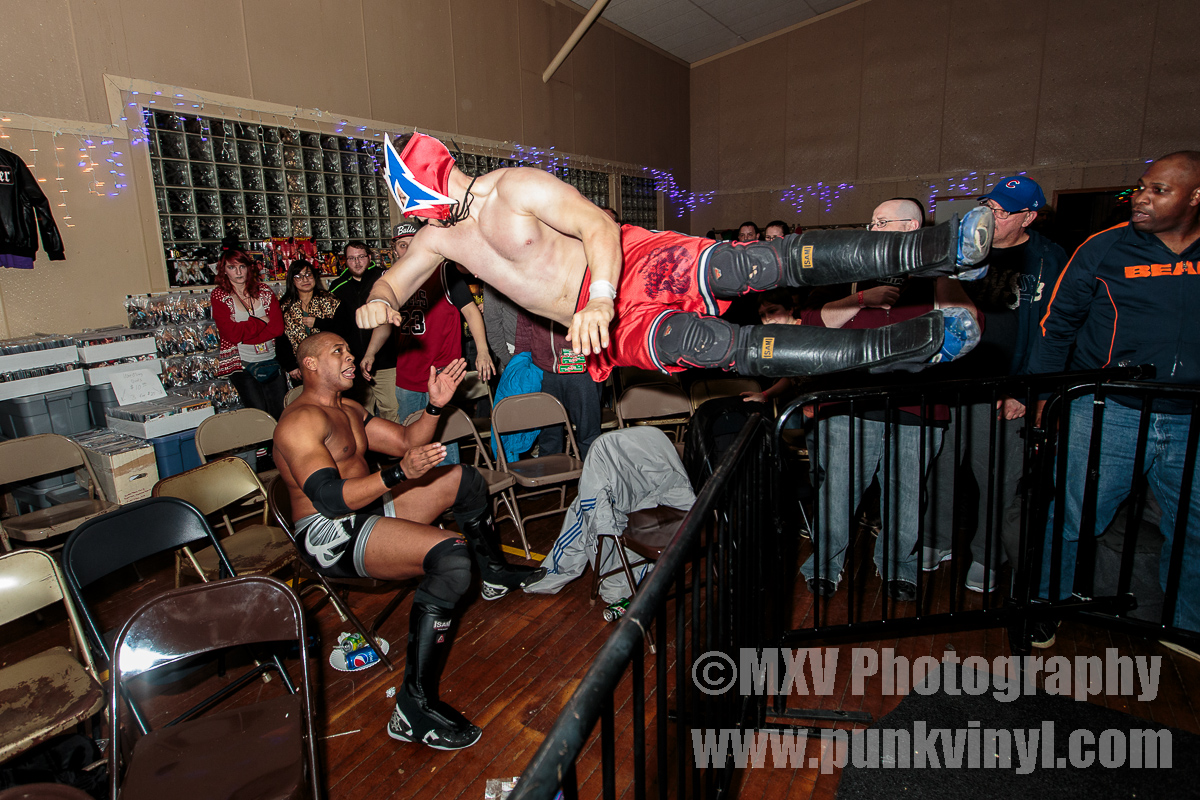 Pro Wrestling Blitz ended the year with their annual tournament to crown a new King. The tournament used to be called King Of Joliet in previous years but was given a new (and better) name this year. Aside from the tournament matches, the Blitz title was on the line and there was a tag-team match as well.

When the show started, ring announcer Mr. Ricolo introduced the first match of the tournament which was between “Brutalicious” Nick Cutler and Ego Fantastico. Ego was the babyface in the match and the match was fairly short but high on the action. The crowd was strongly behind Ego the entire time and Cutler was good at getting heat. Ego won the match with a death valley driver and advanced in the tournament.

In the next bout of the tournament, fan favorite Hardcore Craig faced the big monster, Russ Jones. This was a “big man brawl” where each wrestler’s strength was put to the test trying to take the other off his feet. The guys locked up and jockeyed for position for a long time and many of Craig’s attempts to get Russ on the mat failed and only had him staggering. Russ had early success in the match in overpowering Craig but Craig didn’t go down without a good fight. In the end, Russ was victorious and he wasn’t shy about telling the crowd that he was “the man”.

Brubaker (with Will Moah in his corner), who was the former king, had plans on retaining the crown again when he faced Ruff Crossing in the tournament. The two guys had one hell of an entertaining match which ended in a disqualification when Vic Capri came out to try to stop Will Moah from interfering in the match, got hit in the head, put on a mask and transformed into Ultimo Bonanza, and ended up getting Ruff Crossing disqualified. Ruff seemed rather annoyed at this but forgave Ultimo when he put his head on Ruff’s shoulder and gave him the sad eyes.

Another match, another round in the tournament, this time with The High Priest William Jacobs and Marshe Rockett. Marshe is one of the top babyfaces in Blitz (and pretty much everywhere else he works) and proved why when he thrilled the crowd with some exciting moves which led him to a solid victory when he hit is M-80 finisher on Jacobs.

The tournament took a break for a title match when Machine (with Mad Mark in his corner) defended his title against high-flyer, Pauly Thomaselli. Pauly gave Machine a real run for his money and if it wasn’t for some interference later in the match by Mad Mark, he very well have taken the strap from the big monster but the two together was too much for Pauly and Machine retained the belt, much to the chagrin of the fans.

In the second round of tournament matches, Ego Fantastico faced Russ Jones. Ego fared better than Hardcore Craig in his attempt and was able to get the big guy off his feet more than once, but each time was brief as Russ would recover nearly instantly. At one point, Jones had Ego up over his shoulders and as he spun him around, they knocked out the referee. Russ dumped Ego onto the downed ref for added downtime to the referee and then went to the back and brought out a couple of chairs. His plan to punish Ego backfired and Ego was able to use the chairs to turn the tables on Jones and ended up dumping him off the top rope onto one of them which was enough to keep Russ down for the win.

Brubaker’s hopes and dreams of another reign as king came to a crashing halt as despite having an excellent match, Marshe Rockett defeated him in another exciting match to advance to the finals. Brubaker is one hell of a good heel and was really good at getting the crowd worked up from the moment he steps into the ring and keeps them that was through the entire match.

In a tag team bout, Danny Dominion and Will Moah (part of the un-stable) fought The Shogun Chris Logan and Shane Fury. Fury and Logan started strong but Moah and Dominion did a lot of heelish tactics and double teaming to get the advantage for quite some time. Fury and Logan rallied and made a comeback but it wasn’t enough and the heels stole themselves a win.

In the final bout of the tournament and the show, Ego Fantastico faced Marshe Rockett to crown the new king. Ego was pretty beat up from his match with Russ and limped out to the ring. Marshe gave him the option of having the match at the next show if he was too injured to have a fair match (quite a gentlemanly act) but Ego said the fans paid good money to see the match tonight and not next month so he powered through the pain and gave it his best shot. The crowd was cheering for both guys as they are both fan favorites and these guys had a lot of back and forth action before Marshe was able to nail Ego with his M-80 when Ego jumped off the top rope in an attempt to attack. It was a great finish to a great match. After the bell rang the two hugged and Marshe celebrated his victory and starts his reign as the new King of Blitz.

Capture the Crown was a great way to end the year in Blitz and ring in the holidays. The fans got more than their low-priced money’s worth with this show and everyone on the card put on a very entertaining show.