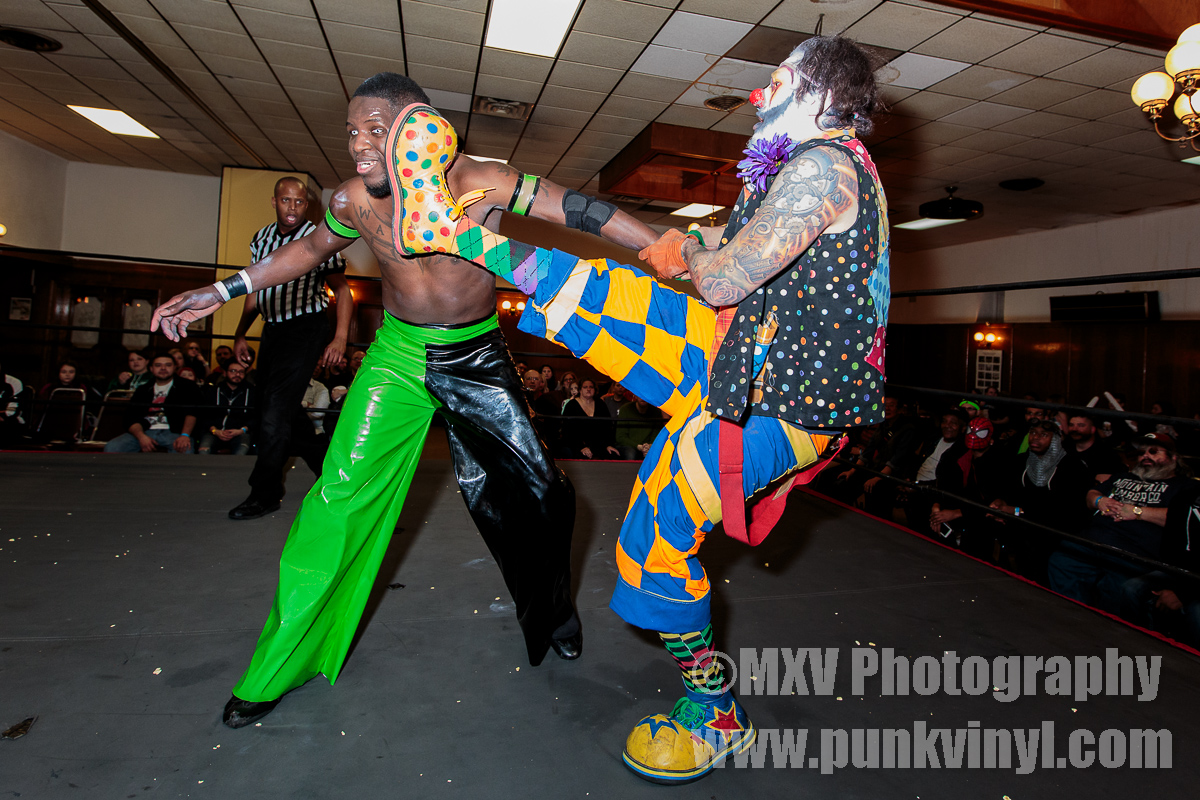 A new year means a new season of Resistance Pro Wrestling and they kicked it off on Saturday in Summit, IL with Resolution. The show featured the first title defense for new heavyweight champion, Cobra, as well as a title defense by long-running women’s champion and best unsigned female talent anywhere, Crazy Mary Dobson.

Before the show officially started there was a pre-show match with Tommy Else and BD Smooth. At the previous show, Tommy Else issued an open challenge to anyone in the RPro locker room to come have a match with him and BD Smooth took him up on it. Smooth was flabbergasted that he somehow lost to the bigger and stronger, Else and wanted a rematch. Tommy granted his wish and a few minutes later, BD Smooth was tapping out on the mat and came up short a second time.

The show started with a promo by King Cobra (heavyweight champ, Cobra and his manager, Justin King) and King did all the talking. King went on a short tirade about how this is their year and they plan to rid RPro of all the freaks, drunks, and clowns so they can return prestige to the sport of pro wrestling and they’d be starting with Yabo later that night.

Willie Richardson made his return in the first match against the debuting, Super Strong Tiger. Tiger was a tall, masked wrestler who turned out to be a solid worker in the ring. The two went about ten minutes and had some really good back and forth action which made everyone take Tiger seriously, so serious in fact that it looked like he may get a victory in his first match until Willie was able to counter with his big pounce and get the pin.  Great work by both men and it really got the crowd going.

Former heavyweight champion, Suge D, came to the ring and before his match with Buddy Roberts Jr. he addressed the crowd and told them he wasn’t allowed a rematch due to a clause in Cobra’s contract until he works he way back up the ladder to earn a new title shot. He went on to say how Cobra didn’t win the title, he stole it and while he can’t blame him for seizing an opportunity, he certainly doesn’t respect it and he will fight his way back to reclaiming that belt. Suge did just that when the bell rang but Buddy damn near ended his journey on the first stop until Suge hit Buddy with a DDT then immediately locked on a submission hold he called “the snake charmer” and made Buddy tap. As Buddy was tapping, Suge was screaming Cobra’s name. This was a new, grittier, and more determined Suge D than we’ve ever seen before and the new Suge was quite the ass kicker!

Fan favorite, Sean Mulligan, faced Cody Jones in the third match. Mulligan has been on fire lately and has been racking up wins lately and he added another one when he got the best of the arrogant Jones but Jones put up a really impressive fight and this was his best showing in RPro yet. His stuff looked good and he was good at getting the crowd to dislike him and he showed just what a formidable opponent he can be.

Spider Monkey made his début for Resistance Pro in the fourth match as he battled Rob Fury. Spider Monkey is easily the smallest wrestler to step in a RPro ring and some people in the crowd were making jokes about his size, saying he was a kid, until the bell rang and he surprised everyone with some really flashy and innovative moves! Fury was getting frustrated as Spider Monkey ran or flipped circles around him and used some really creative offense to get the bigger man at a disadvantage repeatedly. Fury got so frustrated that he resorted to cheating and during a roll up, grabbed a handful of trunks to steal himself the win. The people were pissed but Fury was proud of his handy work and said he was going to celebrate at his VIP table next to the ring for the rest of the night.

The tag titles were on the line when Mad Man Pondo and Shane Mercer put their titles on the line against Main Street Youth (Scotty Young and Jake Omen). Before the match, Pondo said he’d like to start the year off by having the match be under “Pondo’s rules” which means there would be no rules. Jake Omen agreed, much to the chagrin of Scotty Young. Chaos soon ensued and when it looked like Shane Mercer was going to hit his finisher, Rob Fury spit champagne in his eyes and tossed him onto the VIP table which didn’t break and instead Shane bounced off of it which looked incredibly painful. Fury tossed him back in the ring and Main Street Youth got the pin to become the new tag team champions. Pondo didn’t seem that bothered by the loss and proclaimed that he is returning to his old self and will only be competing in hardcore matches this year and that the next time Fury and Shane have a match (they’ve had a long running feud) it should be a tables match, which pleased the fans big time.

After a short intermission the heavyweight title was on the line when Cobra (with Justin King in his corner) defended his title against Yabo The Clown. Yabo has quickly become the most popular babyface on the RPro roster and this match further cemented that in the eyes of the fans. These two fought like hell for close to 20 minutes and there was a lot of near falls and really thrilling action. It was easily the match of the night and at the conclusion of an exciting battle, Yabo had Cobra down and hit him with his flying clown tightrope leg drop from the top rope and covered him. When the referee got to two, Justin King pulled him out of the ring and punched him in the stomach. The referee called for the bell and disqualified Cobra (which means he lost the match but not the title) and Yabo went after Justin King. When he got his hands on him and was about to clock him, Cobra hit him from behind and then hit his own finisher on Yabo. Once Yabo was down, Cobra and King started stomping on him for a while until Sean  Mulligan ran out and made the save. He beat up Cobra a little until Cobra and King ran off. Mulligan helped Yabo up and the two shook hands and Yabo gave him a balloon. Clearly there is unfinished business between Yabo and Cobra and it’s likely King Cobra will want to get revenge on Mulligan as well.

In the final match of the evening, Crazy Mary Dobson defended the women’s title against Hardcore Heather Owens. Heather is one tough lady and these two fought all over the venue, including the lady’s room where Mary gave Heather a swirly! Both ladies kicked the crap out of each other and took a few sick bumps, with Heather taking more of the punishment which set her up to be nearly killed by Mary in the finish which got her an easy three count to continue her title reign.

Resolution was a really fun show with a hot crowd that stayed hot the entire night. A cold snowy night couldn’t even stop the fun and it was a great start to the new season of RPro.