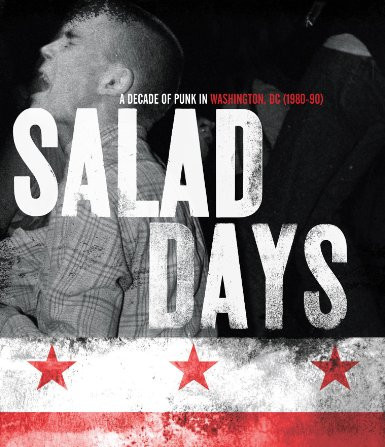 In punk and hardcore’s formative years most major cities in the United States had a pretty active punk scene that transcended the area to get national recognition but I can’t think of a single one that had a bigger impact and was more unique than the Washington DC scene. So many great bands came out of that area over the years and no other scene encompassed the DIY ethic more than that one, in fact they taught most of the rest of us how to do it!

My exposure to the DC punk scene in the 80’s (back when I was a teenager) came in the form of the Flex Your Head compilation. That compilation turned me on to a whole new world of punk rock coming from the nation’s capital and I quickly fell in love with Minor Threat and Government Issue among others. That led me to buy pretty much every Dischord Records release for nearly two decades and I would buy nearly everything coming from that area on other labels too like Fountain of Youth, Sammich, and others. No scene had a better output for a longer stretch of time than this one. Even when the musical direction shifted away from the fast and aggressive hardcore sound and became more experimental, more musical, and more mature, that scene was still churning out one great band after the next and in the center of it all was Dischord Records.

Punk rock documentaries have become more common in recent years and it seemed only a matter of time before someone made a film about the DC scene (especially after there was a really good book about it years ago) and that day finally came with the release of Salad Days (named after a Minor Threat song of the same name).  Much like similar documentaries, it’s made up of countless modern-day interviews of people involved in the scene at the time period covered in the film (1980 – 1990) in various capacities from band member, record label owners, club owners, fanzine editors, photographers, and fans. The film starts out with how punk rock came to Washington DC and what prompted a bunch of local teenagers to want to pick up instruments and form their own bands. This led to said bands deciding to record and release their own records which led to the formation of Dischord Records and it is that label and its roster which make up the lion’s share of this film.

It’s no surprise that the Dischord story and bands get so much screen time as they made up a majority of the Washington DC punk rock scene. Other labels and bands (such as Government Issue) get their screen time but oddly there is very little talk about the other DC labels at the time other than two people who ran smaller labels having some screen time in this film talking about various topics that weren’t their respective labels. Fountain Of Youth Records and D.S.I. are both labels that I’d have liked to had discussed in the film, especially the former as it was a pretty prolific label during that time and home to Government Issue for most of their career.

The topic of “straight edge” gets its obligatory screen time in the film, including the story of how they came to draw the letter X on their hands, and so did the far more interesting “revolution summer”. I really enjoyed hearing the stories of how and why the hardcore bands broke up and how the bands formed in their wake and their shift in musical styles and lyrical content were largely a reaction to the violence in the scene that hardcore inadvertently bred. As the timeline of the decade covered in the film comes to an end they touch briefly on the alternative rock explosion and major label feeding frenzy that soon followed in the early 90’s before the film comes to a close. It was a fascinating story and the pacing of the film was very well done as the film seemed to be over before you realized you were sitting there for over an hour and a half.

The film weighs in at a comfortable 104 minutes and was shot in full HD aside from the old archive footage which varied in quality but it was amazing that some of that stuff even existed considering what technology was at the time and the large cost of entry for what was available back then. Extras include bonus interview footage and outtakes and a nice handful of live video clips of various bands featured in the film. It was a great way to spend a couple of hours while hibernating indoors for the winter and I’ve already watched it a few times through and enjoy it more each viewing. If you are a fan of punk rock from this era (and who reading this review isn’t?) then this is mandatory viewing, especially if you are a fan of any of the bands from this scene. There will never be another music scene and movement like the one that happened in Washington DC in a million lifetimes and I’m really glad someone took the time and spent the money give it a proper documentary.  This film earns a rock solid A.

Order the DVD from Amazon