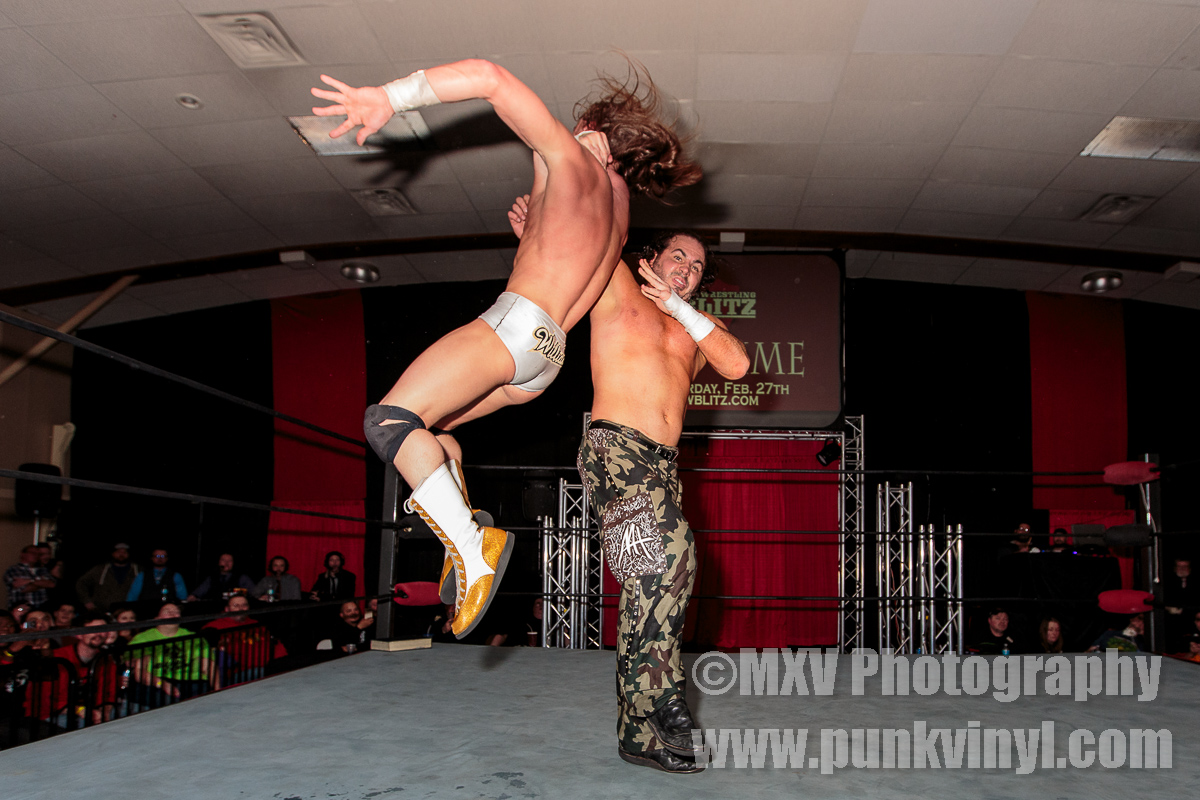 Pro Wrestling Blitz started their new year off with a bang out in their home base of Joliet with Locked and Loaded. Not only did it feature the first round of a tournament to crown new tag team champions but they also had former WWE and TNA superstar, Matt Hardy, in the house! The show was a sell-out and the people were packed in tightly,, many latecomers had to settle for standing through the entire show since every seat was taken and then some.

The first match featured the newly crowned King of Blitz, Marshe Rockett, taking on the Samoan giant, Will Moah. Moah had Matty Starr (both are part of the Unstable) in his corner and Matty interfered a couple of times to aid Moah in getting the advantage on Marshe but it didn’t last long and Marshe showed why he is the king and nailed Moah with his M-80 finisher to win the match and got a huge applause . It was an exciting start to the show and got the crowd all worked up.

The first match of the tag team qualifying matches was next when Ruff Crossing and Vic Capri faced The Prestige (Scotty Young and Russ Jones). This match was very chaotic with The Prestige doing all kinds of double teaming of both the legal and illegal variety. Ruff and Capri fought like hell but it was becoming out of control which led Capri to briefly vanish and return as Ultimo Bonanza. Bonanza went crazy and elbowed everyone in sight but was so out of control it ended up costing he and Ruff the match. Ruff was fed up with Vic being so unstable and costing him another match and this time when Vic/Bonanza tried to apologize, Ruff just walked away frustrated.

TNA superstar Aiden O’Shea and Danny Dominion tagged up in the second tournament match against Hardcore Craig and Pauly Thomaselli. O’Shea and Dominion kept control for a majority of the match as they double teamed relentlessly on Pauly while keeping him from tagging in Craig. When Pauly finally did make the hot tag, however, all hell broke loose and it ended with Craig and Pauly doing a sick double team move from the top rope that looked like a flying curb stomp onto Dominion which got them the win. They celebrated with some post-match beer.

The high priest William Jacobs had the daunting task of fighting former WWE superstar, Matt Hardy. The crowd hates Jacobs and his pre-match promo made sure of it when he said that the entire crowd was going to hell. He did great in his promo and his match with Hardy was easily hist best work so far in Blitz. It really came together for him and his character is really starting to click. He looked good in his match too but not good enough to steal a win, despite even trying to hit Hardy with a foreign object. The wise veteran overcame it all and nailed Jacobs with a twist of fate and got the three count in a very entertaining match. A long intermission followed where Hardy had a massive line of fans waiting to take pictures with him and get autographs.

Two more members of the Unstable, Matty Starr and Brubaker, threw their hat in the tag tournament when they fought Matt Knicks and Shane Fury. Knicks and Fury did a lot of high-flying and flashy moves but it wasn’t enough to overcome the dirty fighting of Matty and Brubaker who got the win and will advance to the next round of the tournament at the next show.

Nick Cutler and Greg Glover were supposed to face Melanie Cruise and Barry Ryte in the last match of the tournament qualifiers but Barry Ryte was a no-show. This left Melanie with no partner. Commissioner Broox broke the news to Melanie and told her she wasn’t allowed to enter alone and that she’d need a partner. Melanie said she didn’t need one and didn’t care who she teamed up with and that’s when the Masked Bonanza came out to the ring to offer up his services. He started the match and got off to an impressive start until the two heels went to town on him and beat him mercilessly for quite some time. Bonanza finally made the much-needed tag and Melanie cleaned house and single-handedly fought off both men and got a win! Her victory celebration was really short-lived though as Billy Whack came out and interrupted her and had Glover and Cutler attack Mel with a chair and beat her down to the mat. When she was laying on the match one of them slid a chair over her arm and the two proceeded to jump on it, likely breaking her arm. Some wrestlers came running out from the back to chase off the heels and they helped Melanie to the back where she’d be getting some medical attention.

In the final match of the evening, Machine (with Mad Mark) put his heavyweight title on the line against The Shogun Chris Logan. These two guys had a fantastic match with a lot of exciting brawling and near falls and it was looking like Logan might win when the Unstable came out and interrupted which enabled Machine to retain the title and just when everyone thought the show was over, the lights went dark and when they came back on, Grin was standing in the ring. He went to town attacking Machine and scaring him off and then stayed in the ring to soak up the applause from the fans who were elated to see him make a surprise return after being away for months. It looks like a showdown between Grin and Machine will be the cards in the near future as Grin would love nothing more than to get that heavyweight title and give his former comrade a beating.

Locked and Loaded was a great show with a packed house full of rowdy fans, it was a great way to keep warm on an extremely cold winter night and they sure got the year off to a thrilling start!

Check out additional photos from Locked and Loaded here!