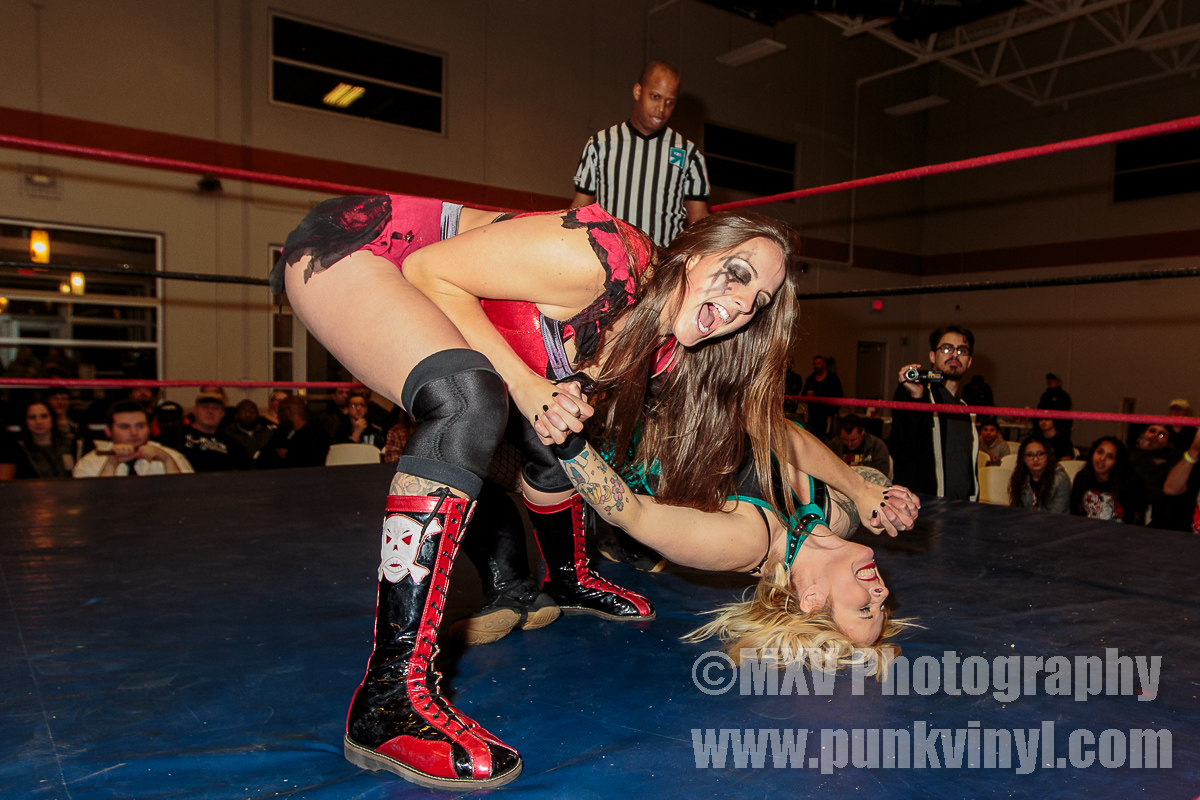 Resistance Pro Wrestling returned to their home base of Summit, IL this past Saturday with their latest event, Asylum. This was at the Spark Recreation Center which was very large and they drew a really big crowd to the event, one of the best turnouts yet for the federation. They had an action packed lineup for the show as well.

A pre-show match got the crowd warmed up when Tommy Else face the tag team of The Slobberknockers in a handicapped tag match. The Slobberknockers were bound by tag-team rules and Tommy had to go it alone. Tommy fought like hell but some heelish tactics by Hardcore Harry as well as BD Smooth holding down Tommy’s legs while he was being pinned by Harry prevented Tommy from victory and The Slobberknockers stole one from Mr. Else.

The show kicked off with Cody Jones coming to the ring and grabbing the mic. Cody let the crowd know that Suge D wouldn’t be there to face him that evening and spent a good couple of minutes running him down before saying he was there to fight and that he’d doesn’t care who he faces as he was going to beat them no matter what. D’Angelo Steele came out to answer his challenge and made an impressive RPro début. This match was big on action as both men trade blows, holds, reversals, and bigger moves. Quite a few near falls got the crowd really pumped. A kick to the groin when the referee wasn’t looking gave Cody the opening he needed to nail an impressive looking brain buster on Steele to get the win.

BD Smooth came out to the ring next and said he was feeling so great about defeating Tommy Else that he felt luck was on his side and he was going to test it against anyone from the back. Willie Richardson came to the ring and Smooth was suddenly second guessing his idea but it was too late to turn back. Willie proceeded to beat the luck out of him and pounced him so hard he went flying out of the ring. Willie went out to collect him, rolled him into the ring, and pounced him a second time! The crowd went nuts for both of them and Willie got an easy victory.

Yabo The Clown faced Mojo McQueen in the third match. Mojo is a huge, masked voodoo king who came to the ring holding a mysterious box  that was emitting purple smoke. Yabo is easily the most loved member of the current RPro roster and the crowd went wild for him. This match was everything that is great about professional wrestling: two larger than life characters in an exciting match with a ton of action and surprises. At one point during the match, Mojo pulled out a voodoo doll and a metal spike and started sticking the doll which was inflicting pain on Yabo.  In the week leading up to this match, Mojo made some videos saying how he was coming for Yabo’s soul. These guys must have some sort of history that we aren’t privy to yet. These two guys went non stop until Yabo hit his tightrope walk leg drop finisher on Mojo but when he went for the cover, Cobra came out to the ring and hopped up on the apron. Yabo grabbed him and was getting ready to clock him when Mojo suddenly came to and grabbed Yabo’s arm, spun him around, and hit him with a huge spinning flatliner move that put Yabo down for the count. After the ref counted three, Cobra relished in what he caused. Yabo was pissed and it was clear that not only does he have unfinished business with Cobra, but now he does with Mojo as well because he had him beat had it not been for Cobra’s interference. This was an easy contender for the best match of the show, until the next match took place and stole the show!

Shane Mercer and Rob Fury had been involved in a feud that lasted over a year and it all came to a conclusion in the next match when the two men faced each other in a tables match to finally settle the score once and for all. These guys beat the holy hell out of each other and took each other to insane limits. Some highlights included Fury doing a DDT to Shane off the wall onto a merch table. Shane pressing Fury over his head and hurling him over the top rope into the first three rows of chairs (thankfully they told the fans to move out-of-the-way so as not to become Fury’s crash pad), Fury coming back from that to take control back from Shane again before both men ended up going through a table at the same time off the turnbuckles. Special guest referee, Mad Man Pondo, declared that there was no way this match was ending in a tie and restarted the match. A few minutes later after some really fast paced action and some exciting reversals, Shane caught Fury mid-air, climbed the turnbuckles, hit his “moonsault and battery” finisher but didn’t let go on impact and instead picked Fury back up and pressed him over his head and tossed him over the ring post and onto a table on the floor. Fury crashed down hard, breaking the table and losing the match. After the match it was clear that Fury legitimately injured his shoulder. As the crowd were still roaring with applause, Shane summoned Fury back into the ring where he gave a little speech about how much he respected Fury being a warrior and the two shook hands and hugged. It was a touching moment and the entire audience chanted for Fury as he earned the respect of everyone in the building. It was easily a match of the year candidate and was by far the best match of the night. Here’s wish Rob Fury a speedy recovery.

After an intermission where all the debris from the tables match was cleared out, it was time for the first of three title matches. Main Street Youth put their newly acquired tag team belts on the line against the exciting masked duo of Spider Monkey and Super Strong Tiger. If you blinked more than once during this match you would have missed something exciting as it was non stop action that featured lots of great double team moves. When the dust settled, Main Street Youth retained in a very close match. It’s a safe bet that these guys will be facing each other again in the near future and the fans will be sure to love it when they do.

Cobra (without Justin King for one show) defended his belt against RPro’s favorite alcohol spokesman, Sean Mulligan. These guys had a great battle with some falls that were so close to three that you’d have needed special tools to measure how close the referee’s hand was to slapping the mat the third time. These guys turned up the heat as each minute passed but there was no decisive winner because Yabo came running out and attacked Cobra which caused him to win by disqualification. None of that seemed to matter much as Yabo and Cobra kept beating the hell out of each other and showed no sign of stopping so nearly the entire locker room came running out to separate the two of them. Even with all those wrestlers in the ring it was still hard to keep the two apart. These two wanted to beat each other to death and it is obvious that these two will be doing battle yet again as soon as possible.

Since 2015, the women have been the main event match of RPro shows and this was no different as the best unsigned female talent in the wrestling business, Crazy Mary Dobson, faced indie sensation, LuFisto! This match was even better than anyone could have predicted. The ladies fought from pillar to post and even did a lap through the crowd where they regularly stopped to beat on each other some more. There was so much great back and forth action that there was no way to tell who was going to win but just like always, Crazy Mary found some clever way to persevere and snuck in a quick roll up to get the pin and keep her title.

Asylum was easily one of the best Resistance Pro shows of all time and the packed house would likely agree. They had some fresh faces to compliment their ultra talented roster and it was an amazing night of mat action!