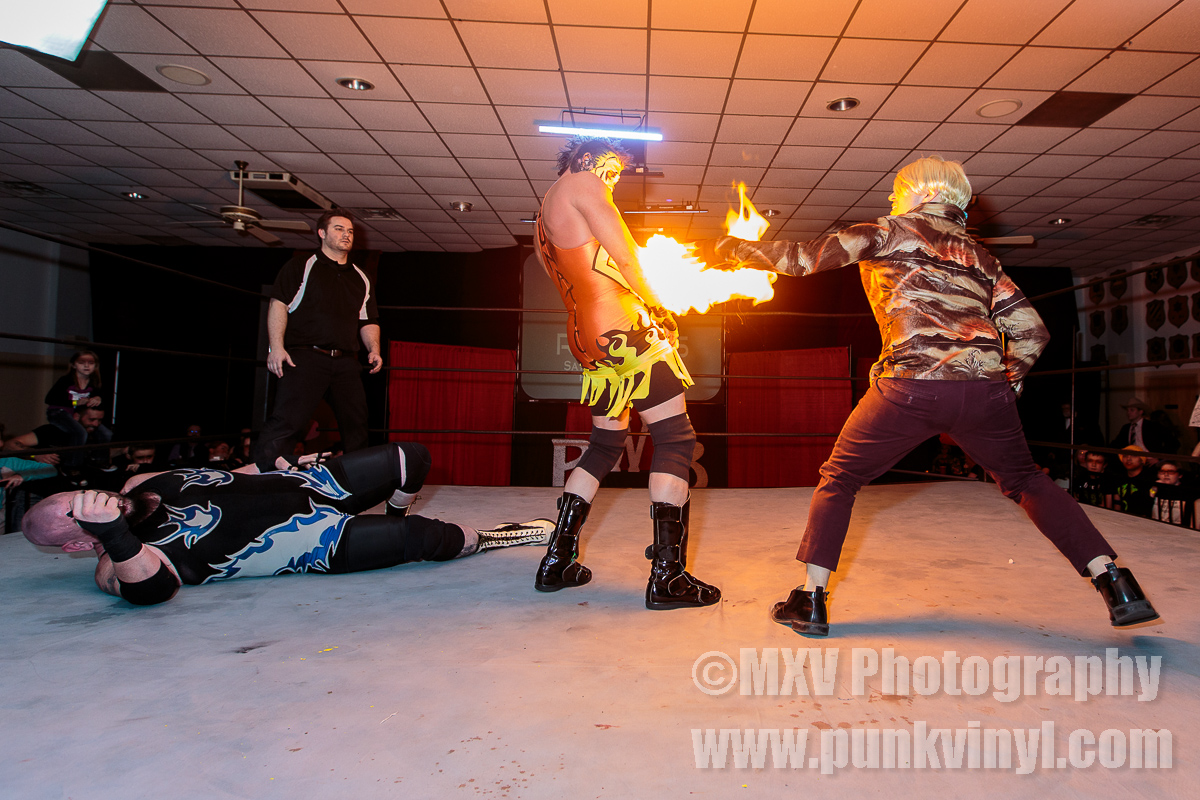 Pro Wrestling Blitz returned to their old stomping ground at the Cantigny VFW in Joliet for one night only for the appropriately titled, Old School. On top of their usual array of great talent they brought in WWE legend, The Godfather for the show which was the first ever independent show The Godfather ever appeared on.

When the show started, Ruff Crossing came to the ring to address the crowd about the falling out (and subsequent heel turn) he had with Vic Capri at the last show. He then proceeded to have a match with Shane Fury. Ruff not only beat Fury with a Tombstone piledriver, but he then proceeded to whip him with his bull rope until Chris Logan came out to make the save. This is a darker, more violent side of Ruff Crossing that we haven’t seen before.

Before the second match, WWE legend, Papa Shango, came to the ring and said he heard The Godfather was going to be there that night and was looking for him. It was a nice surprise and a real treat to see this “old school”character make an unscheduled appearance. When he left the ring to continue his search, Ego Fantastico and William Jacobs had the match of the night. These guys fought like crazy and even took the fight out into the crowd where Jacobs nearly killed himself trying to dropkick Ego off the railing. When the dust settled after some exciting near falls, Ego hit Jacobs with a Death Valley Driver and got the win.

Mason Beck made his PWB début by taking on two men in a handicap tag match. Mason toyed with both men and tossed them around like rag dolls. He’s also about as tall as the Ents from Lord of the Rings and kind of looks like one too. He probably could have disposed of both men in about three minutes but dragged it out for about ten before slamming the two of them to the mat and pinning them both at the same time.

The finals of the tag team tournament took place when Hardcore Impact (Hardcore Craig/Pauly Thomaselli) and The Unstable (Matty Starr/Brubaker) fought a fast paced and exciting match to determine the new champions. A lot of back and forth and double team work by both teams came to a climax when Hardcore Impact crushed Brubaker with their double team finisher that looks like a curb stomp delivered from the top rope. It was painful looking and just what Hardcore Impact needed to become the new tag team champions. After the match, The Godfather brought his “ho train” to the ring to celebrate with the champs and shared some beers with them before going off to sign autographs and take photos with the fans during the intermission.

The Shogun Chris Logan put his No Limits title on the line against Greg Glover. These two guys were very evenly matched and it seemed to frustrate both men as neither could keep the upper hand for very long at all. As the match heated up, Logan started turning up the volume on his kicks until a well-timed super kick downed Glover for the three count and Logan retained his title.

Vic Capri is one of the toughest wrestlers on the independent circuit here in the midwest but even he had to be a little intimidated by the mammoth size of Backwoods Brown. Brown was about the size of two full Vic Capri’s. Capri couldn’t get Brown off his feet for much of the match and in the middle of the match, Vic put on a mask and became Ultimo Bonanza, but he couldn’t do it either. At this point, Vic seemed to be at war with himself as he fought the mask for control of his personality and seemingly by accident managed to get Brown off of his feet more than once and even picked him up and body slammed him. Capri, or Bonanza depending on how you look at it, got the win and after the match Vic was still at odds with the mask which seemed to drag him into the back rather quickly.

In the main event, Machine put the Blitz heavyweight title on the line against Grin in a Joliet street fight which meant there were no rules. These two were once allies in The 3 Rings but have now become enemies and they beat the living crap out of each other for a little while and when Grin looked to be gaining the upper hand, Mad Mark came into the ring and threw a fireball into Grin’s face, blinding him and making it easy for Machine to nail Grin with a spine buster and get the win. Grin was helped to the back by the referee and some Blitz officials as Machine and Mad Mark relished in their violent handy work.

Old School was a fun night out for a one night only reunion of sorts for Blitz in the building they started at. The packed crowd really enjoyed the evening and everyone certainly got their money’s worth.