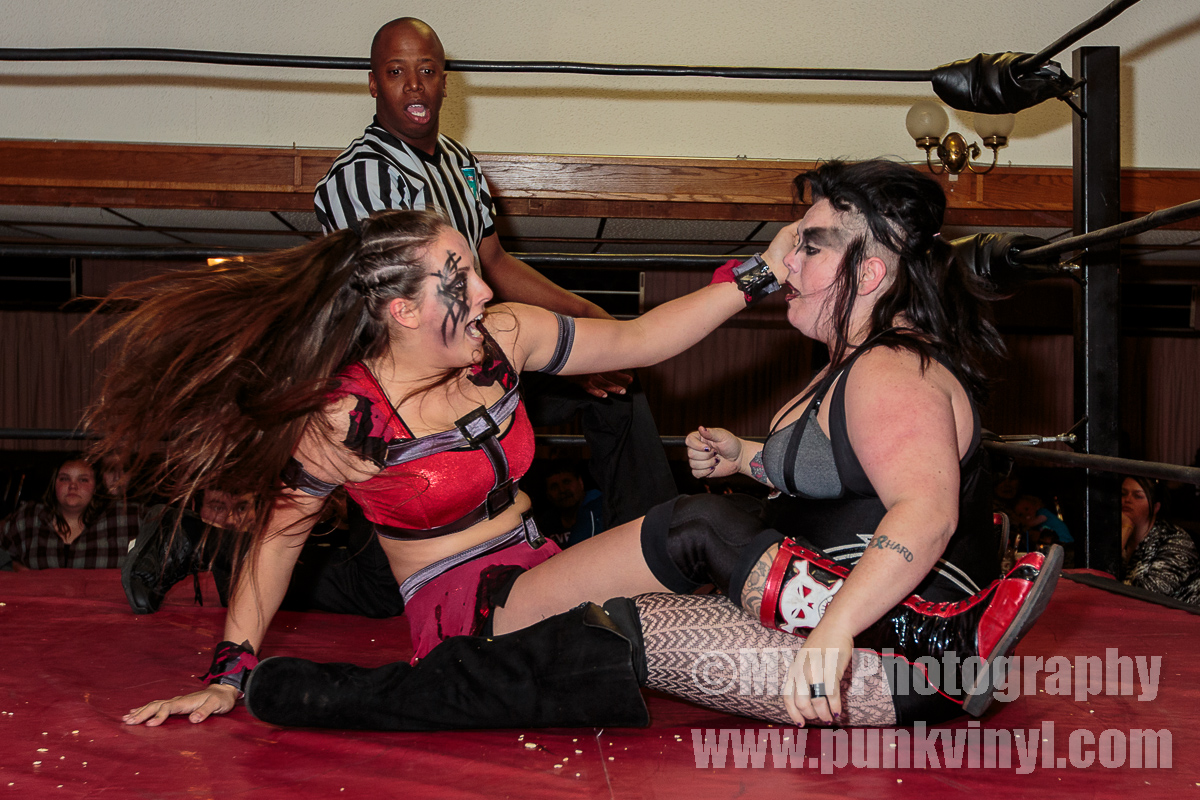 Resistance Pro brought their great wrestling action back to Summit, IL on Saturday night with their latest event, Chain Reaction. The show was full of surprises including the return of a former champion and the return of two other RPro superstars!

When the show started, Rob Fury came out and spoke to the audience. He was wearing a sling as he injured his shoulder at the last show in a tables match with Shane Mercer. He got a very warm reaction from the audience who have a new-found respect for him after that match and he said they haven’t seen the last of him and when he returns, he’s setting his sights on some RPro gold. He thanked the fans for their support, talked up the company, and then said he’d be doing some guest commentary the rest of the night.

A long-term feud came to a conclusion in the first match when Tommy Else and BD Smooth faced off for the last time in an “I Quit” match. The two beat the crap out of each other (literally!) and in the end, Tommy Else was victorious and will no longer have a BD thorn in his side.

Suge D and Cody Jones may not get along but they did have one thing in common; they both viewed the other one as a stepping stone up the ladder in their quest to the top. Suge D is on a mission to work his way back to a title shot against Cobra after getting screwed out of the title at the end of last year and he fought like hell to get it. Cody was looking to make a name for himself and beating Suge would have certainly been a huge feather in his cap but he came up a little short in a very close match. In the end, Suge locked on the Snake Charmer on Cody but Cody refused to tap out. It wasn’t until Cody passed out that the referee had no choice but to end the match and declare Suge the winner. The fans were happy but they had to respect the “never quit” attitude of Jones as well as the man really brought his A-game.

Sean Mulligan faced the returning, Jacob, in the next match. These guys put on a solid wrestling match and Mulligan really got the crowd fired up during the match. Jacob looked really good in his return and the time away seemed to make him an even better wrestler as he nearly beat Mulligan more than once during the match but the Irish Car Bomb persevered and was able to get the win. After the match, Mulligan said that he’ll be at ringside during the lumberjack match later as he has some issues with Cobra and  Yabo both!

Barry Ryte returned to RPro after being gone for almost three years and he had one of the biggest challenges possible in the form of big Willie Richardson. Barry was really outsized but he didn’t let that slow him down. He was hilarious in the way he’d question the ref as to why Willie wouldn’t go down when Barry tried and failed to pick him up, and when he did get Willie off his feet and go for a cover that only yielded a one count, he asked the ref, “Couldn’t you at least have given me a two?”. Some people were laughing so hard at how entertaining he was that they were in tears. Barry was also nearly in tears when Willie pounced him so hard that he went flying out of the ring.  When Willie went out to retrieve his lifeless body and toss him back in for a cover, the bell rang on the count of two as the ten minute time limit expired. Willie was furious and the time-keeper and ring announcer feared for their lives. A couple of minutes later Barry came to and when he found out he didn’t get pinned and the match was a draw, he proclaimed that he was a survivor and that’s as good as a win so he is 1-0. This was a really fun match with great work by both men. Hugely entertaining.

In a hardcore match, Mad Man Pondo and Austin Bradley hit each other with everything but the kitchen sink, and that’s only because Pondo didn’t bring it with him. In a particularly grueling spot, Austin cut Pondo’s forehead open with a broken bottle and Pondo bled like a stuck pig as the two kicked and punched and whipped each other. It looked like Austin was going to get the best of the hardcore legend but when Austin tried to roll Pondo up, Pondo grabbed the stop sign and whipped it at Austin where it bounced off his head and knocked him out cold. Pondo got the three count and said this was only the beginning. Clearly he has no intention of stopping until he loses all the blood in his body in a match, and that is hardcore!

John Skyler made his RPro return with his tag partner Corey Hollis and these two recent NXT regulars challenged Main Street Youth for the tag titles. This was easily one of the best, if not the best, tag match in RPro history. The match was non stop excitement with both teams looking like a million bucks and working their asses off. The entire time there was no way to predict who was going to win and in the end, Skyler and Hollis did exactly what they said they were going to do, they won the titles! Main Street Youth was pissed and it’s a very safe bet they’ll invoke the rematch clause of their contract to get a chance to win them back ASAP.

Cobra defended the RPro title against Yabo the Clown in a lumberjack match. These two have been feuding for months now and the intensity keeps getting turned up, so much so that in order to keep Justin King from screwing Yabo again there was a lumberjack match. The match was non stop action and the lumberjacks had their hands full either by protecting and helping one of the combatants into the ring, or getting some cheap shots in on one before tossing them back in. It was a very exciting match that came to a head when Yabo was tossed out right into Sean Mulligan who picked him up and tossed him hard back into the ring right into the hands of Cobra who rolled him up with a handful of clown pants to get a cheap win. After the match Mulligan and Yabo started arguing and Cobra attacked both of them. Cobra and Mulligan started double teaming Cobra and then beating on each other and the chaos wouldn’t stop. It was then that RPro owner Jacques Baron came to the ring and broke up the fight and said that he’s sick of all three of them and their nonsense and that at the next show there will be a triple threat elimination match and the first one to get eliminated is out of the title picture for a year so they better make it count.

Crazy Mary Dobson was supposed to defend the Women’s title against Terra Callaway in the final match but when the ring announcer called for Terra, no one came out. The same thing happened when he tried a second time. Crazy Mary was getting antsy when the referee came to the ring and said that Terra is a no-show but there’s a new challenger. Mary said she didn’t care who it was, she didn’t drive all the way here for nothing and that’s when Mickie Knuckles surprised everyone by coming through the curtain to face the woman who took the title from her over a year ago. These two spent most of their time fighting outside the ring and they looked like they wanted to kill each other. The fight spilled over to the concession stand where Mary plastered Mickie in the face with an order of nachos that stuck to her face, resulting in what could be wrestling’s first “golden mask”. Mickie didn’t let hot nacho cheese adhered to her face slow her down at all and she kept on fighting and was gaining the upper hand until she missed a move off the top rope which gave Mary an opening for a quick roll up pin to retain the title. Mickie was furious and attacked Mary after the match, and beat up the referee for good measure. It was great to see Mickie back in the ring but man is she going to leave a path of violence with her every appearance!

Chain Reaction was a great show with some great surprises. It was a new chapter for RPro that proved that anything could happen and that their shows are not one to be missed. What surprises do they have in store for their next show on July 9th??