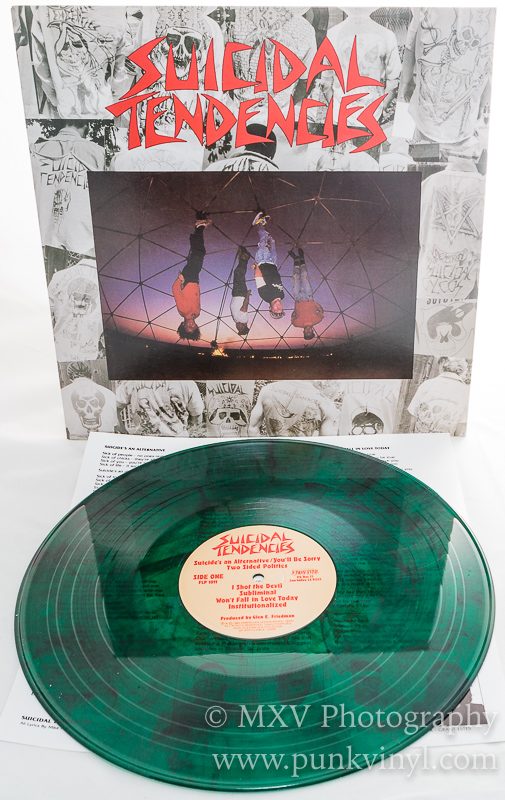 Frontier Records is one of the longest running and best punk rock labels in the United States. Not only do they have impeccable taste in the bands they release, but they care they put into preserving their back catalog to maintain great sound and packaging quality decades later is something that more labels should adopt (I’m looking at you SST!). Not only that but you can get these releases on all kinds of really cool looking colors of vinyl. The label has been busy the past few months and here’s a rundown on the recent stuff.

First up we have the Circle Jerks first album, Group Sex. This is one of the finest records of its time and was a huge record to me during my formative teenage punk years. It also the best thing the band ever did (they made other good records after this, but none were quite as great). This album was original released in 1981, which was 37 years ago now! Where did the time go?! This new edition of the album is pressed on cyan smoke vinyl (a cool shade of blue with some smokey swirls inside) and is limited to 820 copies. It also come with a lyric sheet!

Next up is the first, self-titled, Adolescents album, aka: The Blue Album.

This OC punk classic was another life and game changer when it was first released in 1981 and it still is a hugely influential album. This record defined an entire style of punk rock and every person in this band is punk rock royalty. It features two Agnew brother and the late Steve Soto (also a founding member of Agent Orange). This was their finest album but the band went on to put out quite a few good records with various lineups and is still active, and still excellent, today. This edition is pressed on cyan smoke vinyl and is limited to 1000 copies.

Christian Death (a band which featured Rikk Agnew as a founding member) defined an entire genre of music known as death rock with their début album, Only Theater Of Pain. This thing is a gothic/deathrock masterpiece and influenced generations of pale, dark-haired introverts to start their own band and gave them a unique fashion sense. Fronted by the late Rozz Williams, the band came out of the gate in 1982 with an album that opened minds and showed that punk rock was a huge umbrella that encompassed all kinds of new and exciting musical directions and it wasn’t strictly relegated to the confines of hardcore, which was all the rage back then. After this album, the band soon splintered apart with Rozz being the sole original member before leaving his own band and having the musicians he had in the band with him at the time take the name and continue on, releasing dozens upon dozens of new records and touring the world. Back around 1991, the original Christian Death reunited and there was two different Christian Deaths active for a spell at the same time, which resulted in confusion and lawsuits. Sadly Rozz took his own life and the Valor version of Christian Death still exists in some form. Nothing will ever top this début album though, it is as good as it gets and one that I still play quite often all these years later. A timeless classic!

The first Suicidal Tendencies album is a thing of legend. When it was first released it became the soundtrack to every skateboarding punk rocker (myself included) around the world and it was one of the first punk records to get a video onto MTV and have them play it more than once. People who weren’t even into punk rock at the time were familiar with the song, “Institutionalized” and it became a cult classic. I remember buying this album when it first came out and thinking that the band looked like a really intimidating punk rock gang and being totally enamored with the Suicidal Tendencies shirts that adorned the cover art and wishing I could have one, or all, of them! Had I any artistic skill whatsoever I would have made my own but you are talking to someone who can’t even draw stick figures and have them look good so sadly my dream of a cool looking Suicidal shirt like on the album never came true. The album is permanently etched into my brain however and always brings a smile to my face whenever I play it, which is still quite often.

This self-titled masterpiece was the best thing the band ever did. They changed their sound starting with their next album and went way more metal. They still made some decent records but none of them could hold a candle to this one. They even unsuccessfully tried to re-record this album sometime in the 1990’s when they were signed to a major label and enjoying some more mainstream success but it was a huge embarrassment and was as horrible as you can imagine. The band is still active today with singer, Mike Muir, being the only original member in the band since the late 1980s. They play with a ton of energy these days, but when they play songs from this album you can’t make them out half the time as they sound so different.

In the summer, this album was pressed on emerald smoke vinyl (green with black smoke) and it looks really cool. There was 1000 made of those and they come with a lyric sheet. There was also a red with black smoke version too that came out a little earlier than that and there was 1000 of those too. That one is one of my favorite variations as the color scheme totally compliments the cover art.

All of these records should be available at finer record shops that deal in good punk rock albums but in the event you don’t have one, or if you are already deep in winter hibernation, you can have some sent right to your door by visiting the Frontier Records website. Their prices are excellent as is their service, but what else would you expect from such a quality record label?