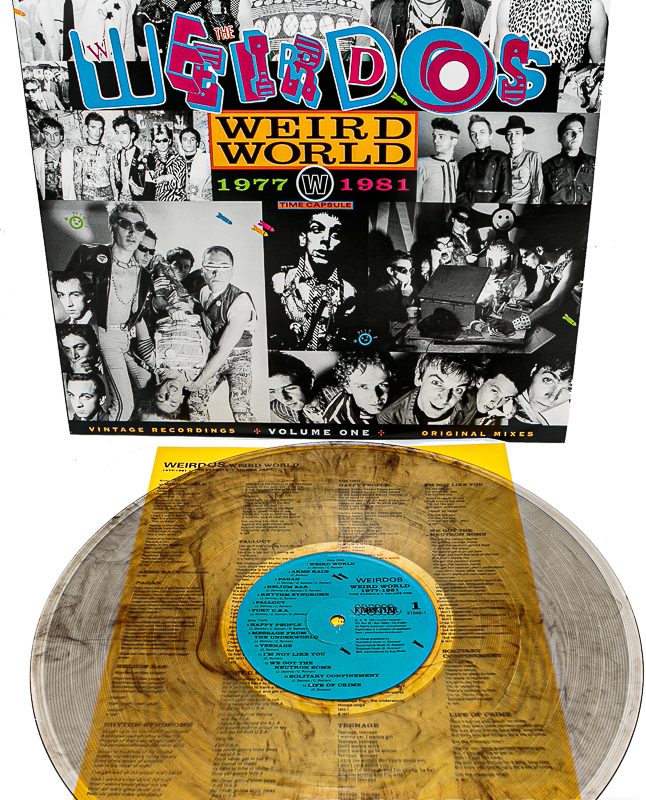 With people being stuck at home during this pandemic with not a lot to do, there’s no better way to spend your time than listening to music and buying yourself some records. Personally I’ve been making up for my lack of usual traveling and frequenting of record shops by purchasing lots of records online. I highly recommend it, it brings me a lot of joy. What should you buy, you ask? Well let me tell you! If you are a fan of classic punk rock and you like your vinyl to come in fancy colors, then Frontier Records has just the thing (well, things) for you. The label has recently pressed up some new colors of their legendary back catalog of Circle Jerks, Christian Death, Adolescents, and Weirdos records and they all look so nice. Here’s a rundown of what they did.

First up is one of the first Los Angeles area punk rock bands, and easily one of the best. The Weirdos were hugely influential on that budding punk scene and their music has stood the test of time and just gets better with age. This band had the look and they had the sound and wrote so many good songs that pretty much every one was amazing. Their posthumous collection, Weird World Volume One is the best place to start for the unfamiliar and mandatory for any Weirdos fan. Not only does this collect some of their best and most memorable songs, but it has unreleased recordings on this as well that don’t appear anywhere else. This new pressing is on clear with black smoke vinyl and is limited to only 300 copies. It also comes with a two-sided lyric sheet. This was the last version of this record to be pressed at Rainbo Records before that plant closed its doors forever.

Next we have the first Adolescents album, often referred to as the “blue album”. This is an Orange County punk masterpiece and was the blueprint (no pun intended) for a style of punk rock that is still quite popular today. The band also features to Agnew brothers in the band and you’ll find no greater talent of punk rock royalty than Rikk Agnew. The lineup of the band on this album features five absolute legends of punk rock and between them all they were responsible for not only this band, but many other amazing bands. This album has two new colors of vinyl available The first color is “grape marble vinyl” which is a purple marbled vinyl that looks like candy. It comes with a two-sided lyric/photo insert as well. This was the last edition of this record to be pressed by Rainbo Records before they closed down, it is the end of an era. It is limited to 1000 copies. The second color is magenta vinyl. This version was the first version of this album to be pressed at Furnace Manufacturing and boy do they do amazing work. This too comes with the same insert but the record is housed in an audiophile, anti-static inner sleeve and the vinyl is heavier. It looks and sounds amazing (disclaimer, this album has always sounded amazing). There was 1000 of these made as well.

The first Circle Jerks album, Group Sex may be rather short in length but it is long in greatness. This is a perfect punk rock album and I almost always listen to it from start to finish. How can you pick a favorite song on this whey they are all so incredible? Keith Morris is one of the greatest punk vocalists of all time and this album never gets old. It is coming up on its 40th anniversary, which is scary to think about, but there’s a reason why people keep buying this regardless of their age, it is flawless! This new edition is on magenta vinyl and was the first version of this album to be pressed at Furnace. It comes with a lyric sheet, has the thicker vinyl and anti-static inner sleeve, and is limited to 1000 copies.

Finally we have the album that defined an entire genre of music known as death rock. Christian Death’s debut album, Only Theater Of Pain. Nothing sounded like this band when this record came out and the influence of it spread worldwide. This album has been in regular rotation for me for the last 35+ years and I don’t see that ever stopping, it simply never gets old. This edition is the remastered edition with the new Rozz Williams cover art (the art was his original drawing for the cover) and comes with an insert. This was the first version of this album to be pressed at Furnace and it is on goth appropriate violet vinyl. It is on thicker vinyl and has the nice anti-static audiophile inner sleeve.

If you are like me and don’t go out during this pandemic, don’t worry about missing out on these as you can visit the Frontier Records website and the lovely ladies at the label will pack it up and ship it straight to your home! I wouldn’t waste a lot of time though if you want these, they rarely last long.