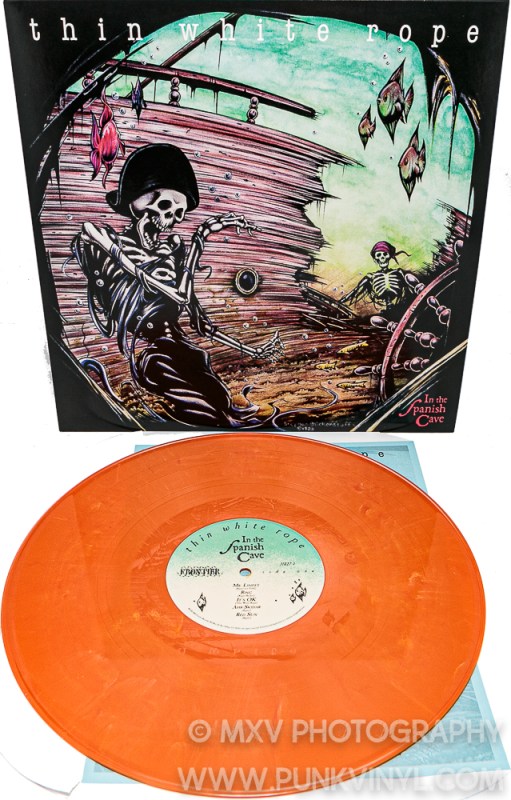 Thin White Rope was one of those very good indie rock bands that for whatever reason seemed to have been overlooked by a lot of people, myself included. They were around from the mid 1980s until the early 1990s, leaving behind five studio albums before they disbanded that were released by Frontier Records but went out of print long ago. Recently the label started reissuing the Thin White Rope records on colored vinyl. I covered the first album here, and now we have a few more nice ones to go with it!

Moonhead was the second Thin White Rope album and it was originally released in 1987 on LP and cassette, then in 1989 on CD. The album, which I think is even better than the one that preceded it, features ten tracks of guitar driven indie rock that is moody, sometimes haunting, diverse, and always interesting. They spice up their indie rock with hints of psychedelic and country at times and some songs are electric guitar heavy and some are more stripped down and mellow. The vocals at times remind me just a little bit of Chris D. from The Flesheaters, a good bellowing vocal with a rough edge to it. Had this album come out in the early 1990s it may have been more well known simply because this album seems to be a few years ahead of its time and it took the music audience longer to catch up (myself included as I totally overlooked this band all these years). I highly recommend this album. This edition comes on two different colors of vinyl: sky blue (limited to 350 copies) and lunar (a grayish/white vinyl limited to 150). Each version is pressed on 180gm vinyl and comes with a two-sided lyric sheet and a download card. It’s a really nice package overall, even nicer than the original pressing.

1988 brought the release of In a Spanish Cave, which was the band’s third album and has the coolest cover art of anything in their discography. It would make for a nice t-shirt actually. The album picks up where Moonhead left off, but slows the overall tempo down a bit more and peppers a little bit more country into the songs and even a little bit of rockabilly at times. It’s another solid album and the more you hear it the more it will grow on you, leaving you wanting to hear it again. This reissue comes in two variations: salmon color vinyl (limited to 150 copies) and blue vinyl (limited to 350 copies). Each version is pressed on 180gm vinyl and comes with a two-sided lyric sheet and download card. Again it is an even nicer quality package than the original pressing.

Next up we have Sack Full of Silver which was their fourth album that was originally released in 1990. This one was a tad bit mellower than In a Spanish Cave, but is a nice continuation and expansion on that sound and has some really beautiful moments on it, especially “Diesel Man” which is worth the purchase price alone. Another solid album in what so far going in chronological order is a really strong band discography. This reissue also comes in two variations: orange vinyl (limited to 150 copies) and silver/gray vinyl (limited to 350 copies). Each version is pressed on 180gm vinyl, comes with a two sided lyric sheet, and a download card. Just like the others, it is a step up in overall packaging quality over the originals (which were also nice).

The last one in the series is 1991’s, The Ruby Sea, which was the fifth Thin White Rope LP. This one branches out even more musically than its predecessor. I hear tiny hints of shoegaze in a couple of songs, there is female vocals on a song, and overall there is more variety to the songs than on Sack Full of Silver. Again it is a natural progression of the Thin White Rope sound and another fine entry in their discography. This reissue comes in two varieties: red vinyl (limited to 150) and blue vinyl (limited to 350). Each copy comes on 180gm vinyl and contains a lyric sheet and download card.

All of these Thin White Rope records can be found via the Frontier Records website and delivered to your door safely, which is a blessing during a pandemic. Treat yourself to some great records from a band that if you were anything like me growing up you may have inadvertently overlooked. Now is the time to make up for it while supplies last!

With people being stuck at home during this pandemic with not a lot to do, there’s no better way to spend your time than listening to music and buying yourself some records. Personally I’ve been making up...