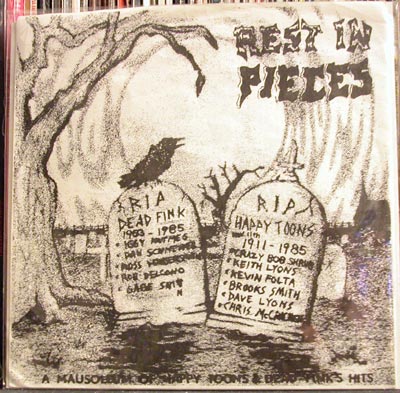 Not too long after Negative Element came to be, some other local punks from the same scene who lived in Downers Grove formed a couple of bands. They all happened to go to the same school, and also happened to be friends of mine. After a couple of earlier little bands like Nixon and the Tapes, Dead Fink and Happy Toons were formed pretty much at the same time.

Dead Fink were a hardcore band from Downers Grove, IL. They were only around a couple years and this is the only recorded output aside from a split demo tape that they made very few copies of (also with Happy Toons). Their side of this record features 3 songs, and all of them are great. While their demo was pretty sloppy and slow, this single shows the band as super tight, playing some great hardcore songs. They played a good handful of shows, including opening up some bigger hardcore shows in the city. The band would later change their name to God (with the “G” being backwards), then breakup (not before going through a few bass players). They recorded some tracks that were never finished and sadly will never see the light of day unless that tape turns up somewhere. I thought I remember Mick (guitar player) saying he had it but whether or not he’ll actually produce said tape is a mystery to us all.

Happy Toons is a similar story. It featured Keith Lyons on drums (who was in Negative Element, who had broken up at this point), and his brother Dave also played bass if I recall correctly. Their side of this record had 4 songs of slightly metal tinged hardcore, and again all songs being great. By the time this record came out, both bands had broken up, hence the title of the record. Happy Toons also played a bunch of good shows in the city opening for such bands as Toxic Reasons among others.

After both bands demise, members from each merged into a band called Insane War Tomatoes. IWT were Gwar before there was a Gwar. It was the perfect combination of punk rock and Kiss, with the toilet humor that Gwar would go on to make famous. IWT pre-dated Gwar by a pretty good amount of time and had they had their shit together more and toured and put out a record, people would have been going to see them every halloween instead of Gwar. IWT would only put out a 7″ and a cassettte single, both with cool gimmick pacagking, then fizzle out. A couple memebers from all the above mentioned bands are still alive and kicking in Downers Grove and some of you may know them as The Klowns (1 and 2) and play in a band called Destroy Everything, who are actually out on tour as I type this.