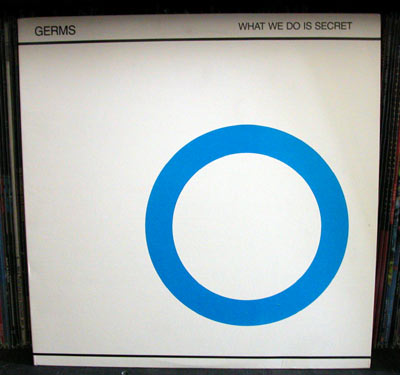 Selections from The Punk Vault [The Germs]

I don’t think The Germs needs much introduction, they along with The Weirdos are my two favorite bands from the first wave of L.A. punk. The band started out really bad, and in their short life, became really good, and became the most infamous of all the bands from that area and time. They got all the credit and recognition despite the fact others like The Weirdos, had a better track record and were around first. In fact, The Weirdos gave The Germs a break by giving them their first show!

During their short life, The Germs put out two singles and one LP. They were also featured on a couple compilations. After singer Darby Crash committed suicide via a heroin overdose, Slash Records would release this posthumous collection of rare tracks. This record compiles the Lexicon Devil single, a couple tracks from compilations, and a couple live tracks from the band’s last show ever (at the Starwood). All the tracks however, were remixed and sound noticeably different than their original versions.

When Slash decided to finally release the Germs material on CD, it was a beautiful collection with a nice booklet, etc. however it wasn’t complete. They opted for the original mixes of these songs for the CD, and they completely omitted the live tracks, as well as the songs that were on the Tooth and Nail compilation. Sadly it has not since been remedied in either case, so the only place to hear a handful of rare tracks is on the old vinyl. While many will prefer the original mixes of the songs, I thought that “Round and Round” sounded way better in its remixed form. It would have been nice to have at least included the live tracks from this on the CD.

Aside from the US pressing on Slash, in 1982 Expanded Music in Italy licensed and released the record in two different pressings (there were different labels on each pressing). All pressings of this record have been out of print for many years.