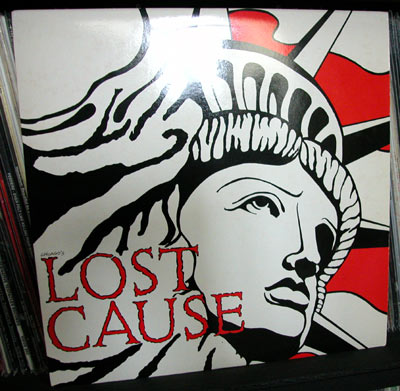 Selections from The Punk Vault [Lost Cause (IL)]

Because I’m not at home when I write this, I can’t double check the year of this release so I’m going by memory.

Chicago’s Lost Cause formed sometime in the mid 1980s by Joe Kelly and a couple other local punks. They seemed to have friends in all the right places and were opening for a lot of big touring punk bands at Last Rites produced shows (Shawn Duffy was Last Rights and booked all the big punk shows back then). Because they were playing so many shows, they got their name around the scene pretty quickly. I saw them open for the Descendents at Medusa’s once at that was my first exposure to them, and they put on a good show.

This album was released on Pravda Records, which was the label that was born out of the record store that was next to the Metro for years. After this record came out, Lost Cause did what so many other bands in that era did, they went metal. Well in this case, they went rap-metal.

Joe Kelly would later find himself touring with Ministry as part of their band playing guitar and singing the Pailhead songs on the Mind is a Terrible Thing to Taste tour. After that I’m not sure what he did musically. I do know he still lives in Chicago and saw him working security for Jam Productions last summer at the Sex Pistols show. All the records are long out of print, but this is the only one that really deserves a reissue.

As always, if you have information, or are a member of the band, please get in touch.