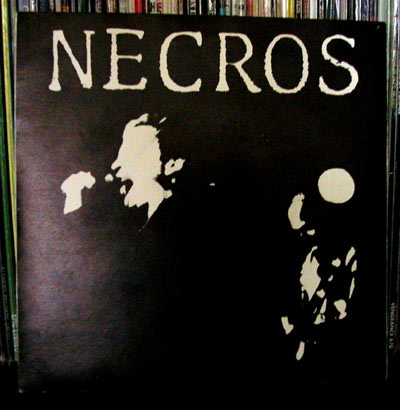 Selections from The Punk Vault [Necros]

The Necros were a Midwest punk band that I believe started in OH and moved up to MI somewhere in their career. They were responsible for Touch and Go becoming a record label and they put out some of the best Midwest hardcore records in their day, and toured the country, befriending bands everywhere they went. Among those friends were the Dischord folks, who would co-release this particular single with Touch and Go. There were 3 pressings of this with 1000 made of each. The first pressing had green labels, the second pressing had tan labels and the third had white labels. They would also do a limited edition of 100 with special sleeves for a show at the Endless Summer Skatepark. These sleeves were hand numbered. One of these days I’ll post a picture of mine.

Among the people in the band, the two that would be the most well known are Barry Hennsler and Corey Rusk, and they’d end up hating each other. During their time together as a hardcore band, the Necros put out 3 7″s and one LP. It was after that when Corey left the band. Barry would carry on the Necros to do one more 7″, a second LP and a split LP with White Flag, but by this time, they were turning into a metal band and really were not very good. The band would call it quits after that.

Today Barry lives somewhere in Chicago. I wonder if he still has a huge record collection. After the Necros disbanded he formed Big Chief during the grunge era and put out a bunch of records. Corey Rusk still owns and runs Touch and Go Records which has become quite successful and put out tons of records to this day, none of them really being punk rock but they have put out a lot of really great indie rock records in the past decade or so and the occasional punk reissues like The Effigies and Negative Approach. I’m not sure what happened to Todd S or the other guy.

Sadly, due to all the infighting amongst band members, the Necros catalog remains out of print except for some shitty bootleg collections. You’d think they’d bury the hatchet just enough for a retrospective CD to come out. I mean c’mon guys, you were a piece of hardcore history and the people deserve to be able to hear this stuff, and you all could get some extra money out of it as well and better you get money for your work than some shifty bootleggers!