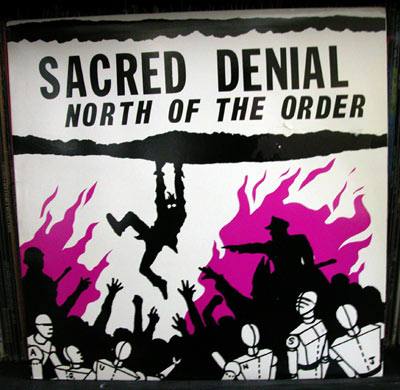 Sacred Denial were another one of the bands around for the heyday of NJ punk/hardcore. My first exposure to them was on the New Jersey’s Got It compilation on Buy Our Records. Those tracks were raw and powerful and I immediately made a point to buy everything I could find by the band.

In their time as a band, they put out 4 albums, and then a 5th one of early material would come out after they called it quits. All their records were on the Forefront Records label, which was either run by a band member, or the band’s manager/friend. I can’t recall which as it has been a long time. I do remember the guy who ran the label being a really nice guy and he’d distribute other labels and sent me lots of records to review in the pages of Spontaneous Combustion.

For some reason, Sacred Denial never got a whole lot of attention. Though the records have been out of print for years, they can be had cheap, which I think people should take advantage of because they are some good records. Over the course of time the band would evolve from straight up hardcore to include a bit of metal and melodic punk as well over the later releases, and they pulled it off quite well. In fact, I often find myself listening to this album over a lot of their other ones.

As to where they are now, I have no clue. I also don’t know what became of the Forefront Records guy as I lost touch with him more than 15 years ago. As always if you were in the band, or have any information you’d like to share, please get in touch.

Listen to “Where’s My Mom?” from the record