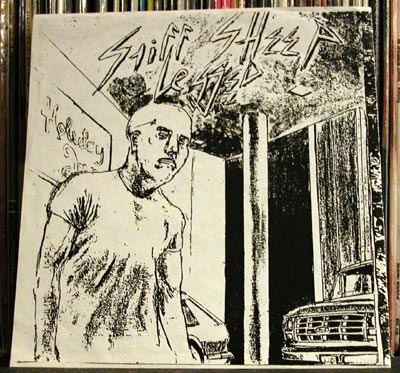 The year was, I believe, 1985 and I would ride my skateboard over to my friend Keith Lyons’ place for a punk show they put on at Keith Garage. It would be The Faction, The Drab, God (formerly Dead Fink) and some other band I’m forgettting at the moment, and there was a band who also played called Stiff Legged Sheep. I don’t remember much about them except they were from Iowa, which they announced before they played. I envisioned them living on a farm somewhere and being the only punks in the entire state. I don’t know what caused me to think that, but keep in mind I was like 15 years old. They were a really entertaining hardcore band and the crowd seemed really into them. Being the wide-eyed young punker that I was back then, I put their name in the memory banks as a band to seek out recordings by.

Not too long after that, on a trip to Wax Trax records I found a copy of their one and only release, this 7″ record, and I quickly snapped it up and showed all my friends that “hey, this is that band I saw at Keith Garage with The Faction”. Somehow none of them were really that impressed as a lot of my friends weren’t such marks for all things punk back then like I was.

After that record, the band vanished into thin air almost as if they never happened. I don’t recall reading anything about them before or since so what happened to them is a mystery and whether or not they recorded a demo before or after this record I don’t know either.

Upon doing a search on them, I came across the lineups for the band from the Iowa Underground Archives and they listed them as being:

While a lot of old hardcore records sell for stupid cash on ebay, this one pretty much went unnoticed by the record hoarding masses and can be had for cheap.

As always, if you have any additional information, recordings of the band, or were in the band, please get in touch.