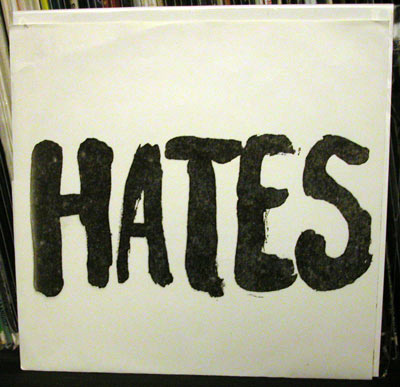 Selections from The Punk Vault [Hates]

Hates were one of the first punk bands to come out of Houston Texas. They put out 3 singles and a 12″ EP during their heyday. Later when they went out of print they’d sell them on cassettes that they made themselves. My first exposure of them was when their singer/guitar player Christian Arnheiter started writing to my fanzine and he sent me a tape of the band. They’d later give me a couple songs for the Immense Decay compilation.

Eventually the original lineup of the band woudl dissolve, and Christian would keep it alive with new members and new recordings. In fact they are still at it today, playing shows and occasionally recording new music. Admittedly I haven’t heard anything they’ve done since around 1990 though, but Christian has a huge mohawk and hasn’t given up on the punk rock. They even have a webpage, though it looks like it hasn’t been updated in about 6 months.

I’m actually in dire need of their 3rd 7″ titled “So What” if anyone has one for sale or trade please get in touch!

This particual record came in two pressings, each having a totally different sleeve. Pictured is the first pressing. The second pressing had a band photo sleeve (which i actually could use a copy of as well for completion sake).