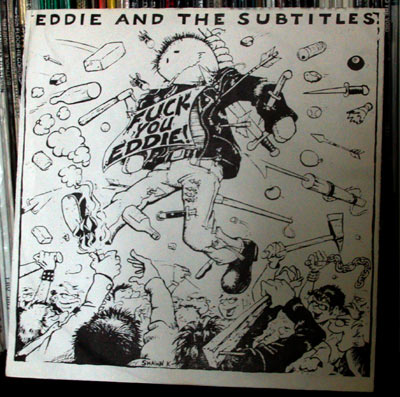 Selections from The Punk Vault [Eddie and the Subtitles]

Eddie and the Subtitles were a band that got their start in the late 70s in Southern California. They would last a few years and play lots of shows around CA but as far as I know, never ventured out past there. I first heard of them by seeing their name on show flyers playing with bands like Black Flag and I’d eventually come across their records, but that in itself was not an easy thing to do since they didn’t seem to make a whole lot of them.

There is very little information available about the band, doing Google searches only provided me with people either looking for, or trading, their records. Aside from that I only found a show review that was a reprint from an old Flipside fanzine. Even the book I bought at the Forming exhibit years ago only briefly mentions when their single was released and nothing else, not even a picture. The band recorded this one single, then they did two albums. The first album is about half good punk tunes and half bad rock songs. The second album, which is a lot easier to find and was released on the 13th Story Records label, was actually not very good at all but had some nice cover art.

Sadly not every one of these Vault entries are going to be as chock full of good stories as I’d like, but at least you’ll get to check out some cool bands.

As to where they are now, I have no clue. I beleive lead singer Eddie died a number of years ago. As always if you were in the band or have any additional information, please get in touch.