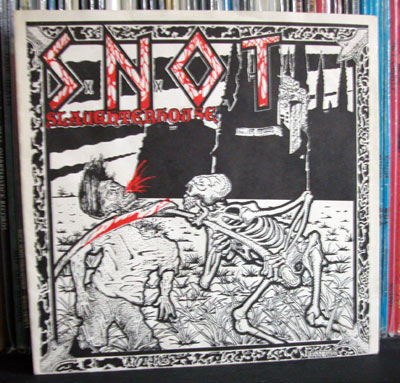 Selections from The Punk Vault [S.N.O.T.]

Back when I was doing my fanzine (Spontaneous Combustion) there was a little label called KML Records that started sending me records to review. The label was run by one of the guy in Maggot Sandwich, and of course I was sent their records to review, along with this one.

S.N.O.T. stands for Slime from the Nose Of Texas. They were from Texas yet were on this Florida label. I imagine the guys in Maggot Sandwich must have played a show with them and became friends with them or something. S.N.O.T. only put out this one single, which was a pretty good hardcore record that came out at a time that a lot of hardcore bands were starting down the path of metal (which in most cases was the same road as the path of suck). After this single, they vanished, never to release another record again. This single came on both blue and black vinyl. I think somewhere I still have a sticker with the sleeve art on it too.

I have no idea what happened to them or what they are doing now. As always if you were in the band, or have any information, please get in touch. Unfortunately I lost touch with the KML fellow a million years ago so I can’t get in touch for any stories.