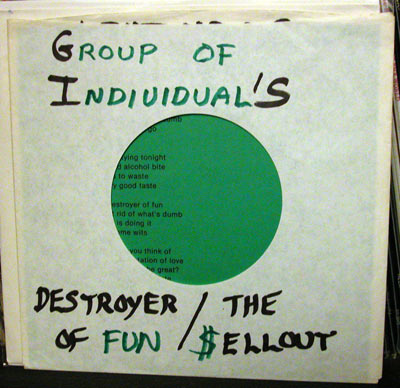 Selections from The Punk Vault [Group of Individuals]

In all my participation in the older punk scene, I don’t think I ever ran into anyone nicer, or more active than Mike Lazuka of Group of Individuals. He was always supporting some thing, partaking of putting on shows, handing out flyers, and of course, playing in his band. To prove just what a nice guy he was, once after seeing them play Mike gave me a handful of Group of Individuals singles for my mailorder, and when I asked what he wanted for them he told me he didn’t want anything for them, it was to help me out. This was totally unsolicited and stood out to me as a really nice gesture from one member of the punk scene to another.

The band started in the early 80s and lasted until somewhere around 1990. They put out three 7″ singles in that time, and also gave me a track for the Immense Decay compilation. I’m sure they were on a couple other cassette comps during that time too. The first two singles were on their own label and the third was on the now defunct Underdog Records. All the copies of this record had had written generic sleeves. With all the time Mike must have taken to hand write them all, and to use two colored markers to boot, he probably would have been better off making real picture sleeves but oh well.

A few years later, in the early 1990s, Mike put together a CD retrospective of all the recorded works of Group of Individuals and sent me a copy. What was odd, was that one or two of the songs were different versions than that of the vinyl. After that, the band, and him, seemed to have vanished, at least off my radar as its been years since I have heard from him. I’d like to know what he’s up to these days.

As always, if you were in the band or have further information, please get in touch.