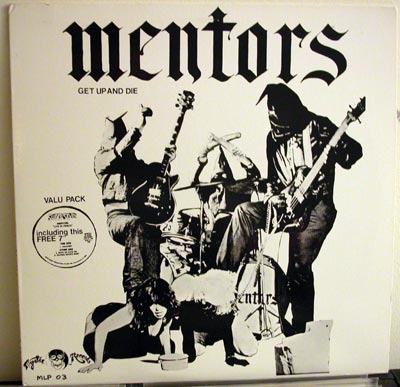 Selections from The Punk Vault [Mentors]

I’d be surprised if any fan of punk rock has not heard of the infamous Mentors. They were the kings of what they called “rape rock” which translated means goofy songs with misogynist lyrics and cheap shock value. Anyone who took the band seriously was a complete and utter fool. The Mentors loved to shock, and they found a gimmick that gained them quite a reputation, and got their name out there.

Musically they were one of the first bands of the era to cross punk and metal. Well, not metal so much as rock. It was later that they’d go more metal, and of course that meant they also stopped being as good as they were in the early days. This was their first record, and the first pressing of it came packaged in a clear bag with just a single double sided printed 12″x12″ insert. They referred to this as the “trash bag”. The same packaging was also used in the De De Troit 12″. It was later issued as seen above, in a real sleeve and contained a bonus live 7″.

In the later 1980s the band signed to Metal Blade Records and put out a couple albums then they’d later resort to (probably by having no other choice) putting out their own records (usually only on cassette). They once did a tour with Revolting Cocks, which was my one and only time I got to see the band play live. I was the only one in the audience who clapped for the band and liked them. All those Wax Trax kids just wanted to see Revco play and couldn’t be bothered by anything else.

El Duce even made it on a couple of those daytime talk shows like Geraldo where he’d stay in character the entire time, never breaking Kayfabe for even a second to let anyone in on the joke, and it got quite a rise out of the toothless audience, let me tell you! Sure El Duce was a drunken pervert, but from the stories I have heard from Doug Moody, he was a genuinely nice guy in real life once you got through the shield of his gimmick.

Sadly, El Duce died in 1997 when he allegedly stumbled onto some train tracks and was killed by a train. Rumors were abound of him being killed by someone hired by Courtney Love as further conspiracy in the death of her husband Kurt Cobain. Apparently El Duce was going around shortly before his death telling anyone who would listen that Courtney tried to hire him to kill Kurt. Nothing was ever proven though and the stories remain speculation and rumor.

Sadder yet, the remaining members of the band still tour as The Mentors, even though the guy who created the band and the gimmick is dead. Here I thought nothing would be more pathetic than Jerry Only’s version of “The Misfits” but those two remaining band members went and proved me wrong. I’d provide a URL for a website they put together, but that might be viewed as condoning what they are doing, and I don’t want some naive sucker to wander over there and buy something from them, thus legitimizing their exploiting and soiling of The Mentors name (if soiling it is even possible).