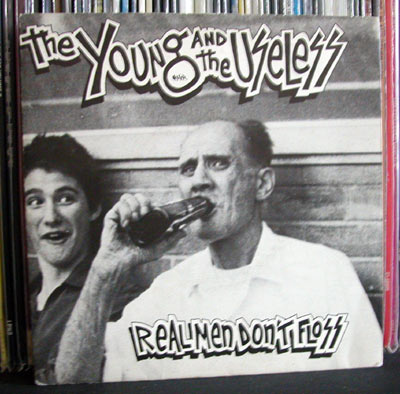 Selections from The Punk Vault [The Young and the Useless]

The Young and the Useless were a very short lived band from New York City circa 1982. The stayed together long enough to put out this lone 7″ and then fell apart and called it quits in 1984. The band consisted of Adam Horovitz, Adam Trese, Arthur Africano, and David Scilken. You will likely recognize that first person’s name as being a member of Beastie Boys. Adam didn’t join the Beasties until 1983 when their original guitarist, John Berry, quit the band.

Until recently, this was the only recorded works available, however in the past couple years Ratcage Records was resurrected and they released a Live at CBGB CD featuring recordings of a bunch of old punk bands from that era. I am not sure if it is still available as I recall reading that the Ratcage Records person had died last year I believe. This record still remains out of print. You’d think the Beastie Boys would have reissued it themselves but I guess it isn’t that important to them. Aside from knowing what Adam is doing (still kicking with the Beasties), I don’t know what became of the other members.

A funny story about acquiring this record. It was easily more than 12 years ago when I was at a local record store shopping and I saw a guy holding this record in his hand and showing it to his girlfriend trying to explain it to her. She didn’t seem too impressed and seemed to also scoff at the 10 dollar price tag. I was witnessing this getting sick to my stomach that had I shown up a few minutes earlier, the record would be in my hands. I started mentally willing the guy to change his mind and put it back, like trying to do the jedi mind trick. I had almost given up hope when the guy walks back, and puts the record back on the shelf! He didn’t even finish turning back around to walk away again when I grabbed the thing and sat there shocked that Yoda’s tricks actually worked! Whoever you are, thanks for not buying it. The record has had a happy home in The Punk Vault ever since.

As always, if you have further information or was in the band, please get in touch.