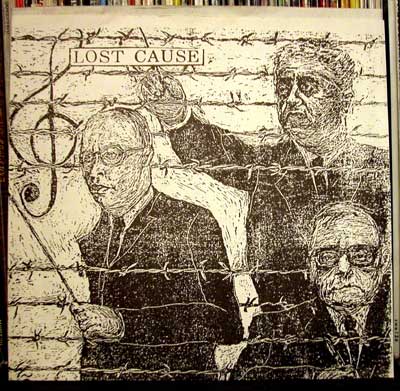 Selections from The Punk Vault [Lost Cause (CA)]

Before there ever was a Lost Cause from Chicago, there was one from California who formed in the early 1980s. They put out one 7″ and one LP before they disbanded. Quite awhile back, original guitarist Steve Young contacted me and ended up sending me a history of the band. I fell out of touch with him since though, and never got the rest of the story. Here is what he sent me.

Feb. 1981. Orange, California. The Big O skatepark.
Five young punks, two age 14 two age 16 one age 18, decide to form a punk band. Upon hearing this, local skate pro Duane Peters, now of U.S. Bombs fame, says “You should call yourselves Lost Cause”, obviously meaning it as a jab or put-down. They love the name and a band is born.

May 19 1981. Costa Mesa, California. The Cuckoos Nest.
Lost Cause play their first show, a mere three months after forming. The band is well-received by audience and club management. They are asked to return on the 29th of May to open for TSOL. The show is a tremendous success and Lost Cause is booked every other Saturday night at the Cuckoos Nest playing with such names as FEAR, The Circle Jerks, Agent Orange, etc.

July 1981. Anaheim, California. Chateau East Recording
Lost Cause record six songs on 8-track. Four of these songs, Born Dead, No Justice, American Hero, and Senior Citizen are released on a 7″ EP by High Velocity Records. The band goes the extra mile and pays twice the cost to have ALL pressings done in RED VINYL. The records sell quickly, prompting interest from numerous industry snakes.

March 1982. San Francisco, CA
Lost Cause singer Johnny Ernst is replaced by Ron McCamey (a story in itself). Lost Cause and Social Distortion combine forces and tour to San Francisco. They play the Broadway Theater with The Lewd. Upon returning home to Orange, Lost Cause immediately enters the studio and records the album Forgotten Corners.

Unfortunately, the email address I have for him is no longer valid as I recently tried to contact him to get the rest of the story.

As always, if you have any information to add or you were in the band please get in touch.