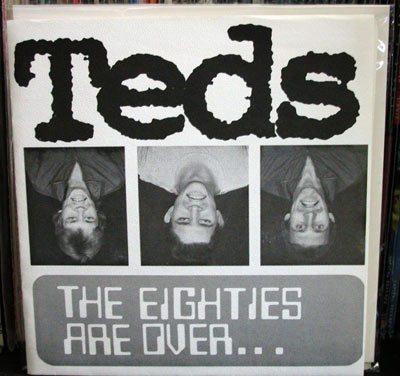 Selections from The Punk Vault [Teds]

This has got to be one of the most obscure 7″s to come from the deserts of Phoenix, AZ. My first exposure to this band was on the This is Phoenix Not the Circle Jerks compilation and this band was one of the standouts. I was always a fan of Placebo Records and I had never seen or heard of this single before until I was reading the insert to said compilation and they made a reference to it. In fact, throughout all the 80s, not once was this ever listed in any Placebo catalogs.

Teds were a 3-piece band consisting of Bob Peterson on Guitar/Vocals, Greg Hynes on Drums/Vocals, and Mark Bycroft on Bass/Vocals. Greg Hynes was half-owner of Placebo Records and is most known for later being in Mighty Sphincter. Teds put out this one single and were on that compilation mentioned above and that was it, then they called it a day.

My quest for this single would come to an end a few years ago thanks to a band member having a spare copy and being generous enough to pass it along to me. For that, I’m forever grateful. There was a mere 500 of these pressed. As to where they are now, Greg Hynes still resides in Phoenix and is still in Mighty Sphincter who play the occasional show and have some plans on recording some new material soon. Bob Peterson unfortunately passed away and I’m not sure what happened to Mark.

As always if you have any information about the band or were in it, please get in touch.