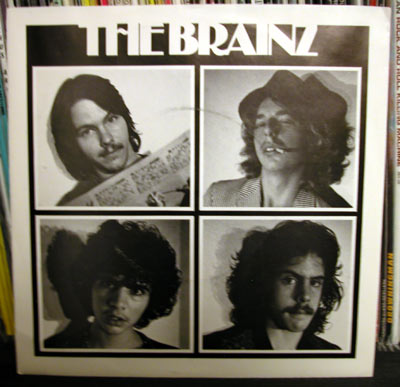 Selections from The Punk Vault [The Brainz]

Even before Teds, The Brainz would be the first band in what spawned that whole Placebo Records Phoenix punk scene. 3/5 of this band would eventually be in Mighty Sphincter and be a contributing force of that scene at the time.

The Brainz sole musical output, to the best of my knowledge, is this 7″. They released it themselves but Placebo Records would end up selling it through their catalog well into the mid-80s. The band consisted of Wayne Frost, Doug Clark, Clark Stokes, Joe Albanese, and John Stewart. Wayne, Doug and Joe would all end up in Mighty Sphincter at some point, with Doug being the founding memeber of Mighty Sphincter along with Greg Hynes of Teds.

Where are they now? Doug Clark is sill in Mighty Sphincter and they still play occasional shows and are recording a new record soon. He is actually clinically insane or something to that effect, and the state pays him to stay home! He is quite a talented musician though. I believe Wayne and Joe are still around and one of them might still be playing music, if not both of them. I am not sure about the other fellows who were in the band.

As always if you have any information or were a member of the band, please get in touch.