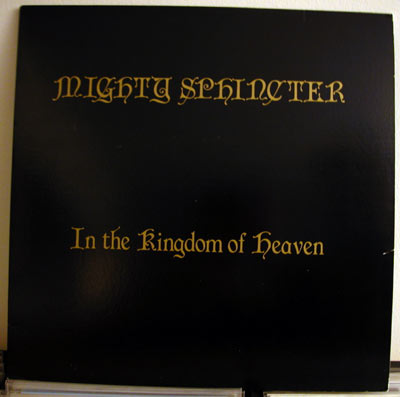 Is it any surprise that after the last two selections that I’d follow it up with this band?

Mighty Sphincter are, in my eyes, one of the most under-appreciated bands to come out of the Phoenix sands. Formed in 1981 by Greg Hynes (Teds) and Doug Clark (The Brainz), they’d release a handful of records, none of which would sound like the one that came before it, but all of which were quite good. The band’s releases all have the distinction of practically having no to singers the same!

Their first singer was a man named Ron Reckless who dressed up like Satan in drag. He had a penchant for consuming large quantities of narcotics and that would be his undoing. This fellow was the singer on their first single, Heathouse. They eventually kicked him out, then told stories about how he died. These stories were told in the advertisements for their records. Before ousting him, they recorded an EP with him that became half of the Ghost Walking album. Guitarist/songwriter Doug Clark (or Dominic Royale as he sometimes referred to himself as) would take over the vocal duties for the second side of Ghost Walking and also sing on most of their first “real” full-length titled The New Manson Family. Ghost Walking was billed as a double EP because the plan was to actually have released those as their own records.

The album had the distinction of being “produced by Alice Cooper”. It was Sphincter most angry sounding album but it con a few real gems. This would also mark the end of the sheer demented sound of the band as they were evolving into a more serious act by this point.

This leads us to this record. In the ads they were running, they made up a story that said that Doug Clark had died of AIDS and now they had a new singer! Bill Yanok would be the singer on this one and musically the band was going in a more gothic direction. Bill sang 4 of the 6 songs on here, with Greg Hynes singing the other two (the featured track being one of them). After this record, the band played a handful of shows and then called it quits for a bit. Bill ended up starting a new band but I can’t recall the name, nor have I heard them. This was easily my favorite Sphincter record and I still listen to it all the time.

They resurrected in the early 90s and put out a self-released 7″ and then vanished again until a few years ago when they’d reform yet again and self-release a CD titled The Holy Unholy. These days they kept the goth feel but mixed it with a more metal like sound that is really quite good. Greg handles all the vocals now for the most part, with Doug handing them here and there. They are still at it as I type this and I believe are planning a new recording soon.

There is a somewhat dated small interview with Greg Hynes on the Spontaneous Combustion site and you can check it out here.

As always if you have any information or were in the band, please get in touch.

Listen to “Secret Ceremony” from the record