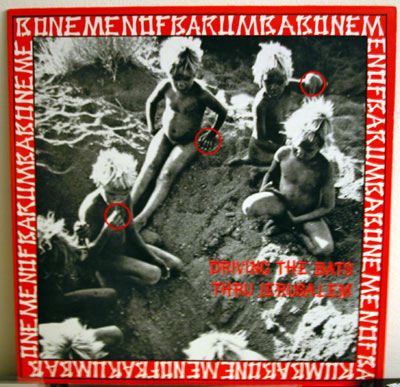 The Bonemen of Barumba were another great Chicago area band you probably never heard of. They originally were from the suburbs (Lisle or Lombard to be exact) but then relocated to Chicago proper later on. The band was founded by Tom Jonusaitis and Mark Panick, a couple of guys into super8 film, around 1980 or 1981. They put out a self-titled/self released 10″ that had four songs on it. Musically they were a gothic punk band. Back then, the umbrella of punk covered a lot more varieties of musical styles than it would later on.

The band even made a float and participated in some Villa Park, IL parade with it. How/why this came to be I have no idea. They also made a video which I never got to see but saw a few stills from it on the web. I’d love to see it if anyone has a copy. This record was their second release and also featured 4 songs. It was released on the Fever Records label who would also co-release a Big Black record as well as some other artist. I guess Fever had high hopes that this band would hit it big but it never happened for them.

Their third and final release was a full-length album titled Icons that was a joint release on Fever/Enigma. The album didn’t sell well despite it being a good and diverse record and the band called it quits. I have no idea what happened to the members after that. Years ago I had a friend who worked at a record store that said he would see one of the members around sometimes and that he’d get contact info for me but that never happened. I’d love to know more about them seeing as they are from my area and I seem to be one of their only longtime fans, let alone someone who actually has heard of them.

As always if you have any additional information or you were a member of Bonemen of Barumba, please get in touch.

Listen to “Pity it Ain’t” from the record