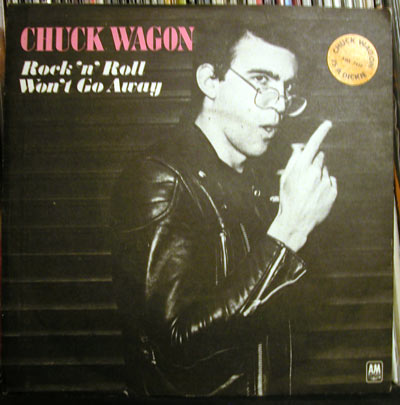 Every punk fan has heard of The Dickies and likely own at least one of their albums and/or their multi-colored vinyl 7″s. They were the first Los Angeles punk band to get signed to a major label and they lasted longer than any of the other bands from their time. In fact, they are still at it today with 2 of the original members (Stan Lee and Leonard Graves).

One of the other founding members was keyboardist/saxophonist/guitarist Chuck Wagon (real name Bob Davis). He released this solo record, his only record done outside of The Dickies, while he was still in the band. On the cover it has a sticker stating that “Chuck Wagon is a Dickie” in an effort I’m sure to help sell the single. Musically it was a lot more mellow and more new-wavey than the material The Dickies were known for. The record came on both purple and black vinyl. For completion sake, I actually need a copy on black vinyl if anyone can point me in the direction of anyone selling one.

In 1981, a volatile and unhappy Chuck Wagon shot and killed himself. This shocked the other band members and the band came to a screeching halt for some time afterwords. Later on, Stan and Leonard resurrected the band adding 3 new members and carrying on. They’ve been at it off and on ever since despite battles with “inner demons” (read: drugs), labels ripping them off, etc. They are currently signed to Fat Wreckchords and have put out a couple records on that label.

As always if you have any additional or are a member of The Dickies, please get in touch.