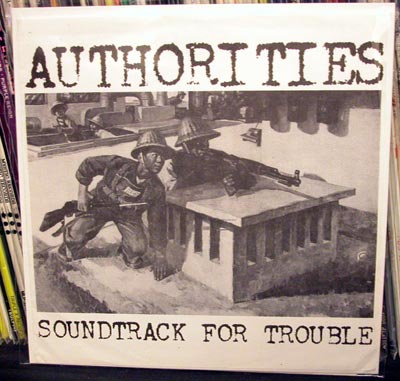 Selections from The Punk Vault [Authorities]

I first heard this band on one of the best hardcore compilations of all time, We Got Power: Party or Go Home. Nearly every song on that compilation ruled and it started off with this song. I wouldn’t even know for years after getting that compilation that they had put out a record as it didn’t seem to get very good distribution in the Midwest and its doubtful that they made many of them, especially judging by how often I see it on people’s want lists these days.

The Authorities were from Stockton, CA and during their time together they released only one record, this 7″ EP. They were also on a few compilations. The band broke up shortly after that. They had recorded some additional material that didn’t see the light of day for over a decade when a record collector named Ryan Richardson from Texas would release it on an LP along with the 7″ tracks on one of his two record labels. Of course that record too is now out of print so these recordings are once again not easily available to the masses.

As to where they are now, I have no clue. I never saw much information about them throughout the years of reading fanzines, etc. As always if you have any additional information or were a member of the band, please get in touch.