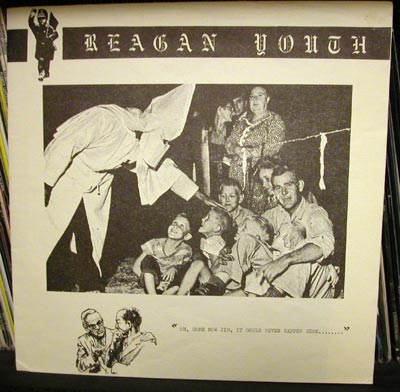 Along with a ton of other bands, my first exposure to Reagan Youth was on the mighty P.E.A.C.E. compilation. I bought that comp because it had a bunch of bands I had only heard the names of at the time and not heard the music of. Reagan Youth was one of the many standouts on there that found its way onto countless mix tapes I’d make for myself back in high school. It wasn’t long after that I’d find and buy the only record they would release during their brief time as a band. I also had the luck of seeing them play in 1987 at the “new” Igloo in Chicago. At this point singer Dave Insurgent looked like a rastafarian and not a punk, but they still put on a hell of a show.

Dave Insurgent (real name: David Rubinstein) was born in 1964. He formed Reagan Youth with guitarist Paul Bakija when both were in high school. While they were still in high school, the band played the punk clubs of Manhattan. In fact, David’s science teacher became a roadie for the band (That high school teacher was so into the punk scene that he shaved his head and as a result almost go fired by the school administration).

The band toured across the country a couple times in their career and put out this lone 12″ EP. It was self-released but they had something to do with R Radical Records at some point as R Radical was selling it at a time when they were only selling their own releases. I don’t know if they helped released it or were just helping their friends distribute a record. The record did not come in a standard LP type jacket, it was housed in a big folded poster sleeve that was full of all kinds of information plus the lyrics.

Weathered and worn in the late 1980s from touring and drug abuse, the band packed it in when Reagan left office in the late 1980s. It made sense seeing as naming your band after a president gives you a pretty short shelf life. I guess when I saw them it was their final tour.

After the bands demise, New Red Archives reissued this record with a few bonus tracks. However, they made the mistake that some other labels have made in the past, they wouldn’t leave well enough alone! Instead of giving the people the original recording with the bonus tracks, they remixed the thing, and watered it down to the point of embarrassment. If you play the original side by side with the reissue (which is the only version you can purchase these days) your response will like be “what the fuck were they thinking?!” While it is nice that the music is still available in some format, they should have not messed with perfection. They later released a second collection of unreleased songs that the band recorded after they had broken up, but wrote and played while they were an active band. It wasn’t as good but still is worth having. Both are collected now on a single CD.

What happened to Dave Insurgent after Reagan Youth called it quits is a tragic tale. By this time Dave had developed a serious heroin addiction. He was also dealing drugs, although he was not very shrewd at it. Dave had the bad habit of consuming the drugs he was supposed to be selling.

In a drug deal gone bad, another drug dealer violently beat up Dave with a baseball bat. He was hospitalized for weeks. When he got out, he returned to his parents’ home. There, he continued to use drugs as his parents tried to help him recover. Eventually Dave left his parents’ home and moved back to the lower East Side. By now, between the violent assault and his continued drug use, he was no longer an energetic anarchist. He had become a bit disheveled, and many of his friends from the punk scene no longer associated with him.

Dave began dating Tiffany B., a prostitute who worked on Houston Street. Dave had told his parents that she was a dancer. Tiffany supported the couple and their drug habit by turning tricks. Dave would often hang out on the street with Tiffany, waiting while she serviced a customer, and then going with her to score drugs.

Around this time, Dave’s mother died in a freak car accident. One night shortly after, Dave and Tiffany were waiting on Houston Street when a familiar customer pulled up in a pick-up truck. Tiffany got in, telling Dave that she would return in twenty minutes. She never came back. Dave called the police with a description of the truck and went to all the hospital emergency rooms in the city searching for Tiffany. A few days later, on Long Island, the police pulled over a truck and found Tiffany’s body in the bank. They arrested the driver, Joel Rifkin, Long Island’s most famous serial killer, who was later linked to killing numerous prostitutes.

Depressed and alone, after the unexpected losses of his girlfriend and his mother, Dave headed into a downward spiral. One month later, he committed suicide.

As to the rest of the band, I have no idea what they are up to now.

As always, if you have any additional information or were a member of Reagan Youth, please get in touch.