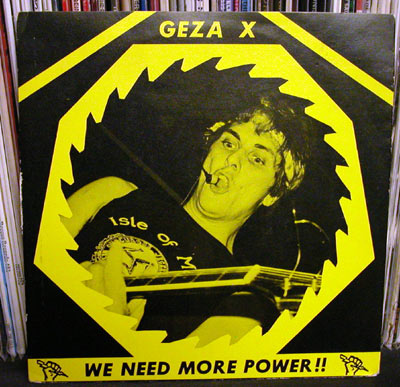 Like a lot of tales, this one for me started with a compilation. It was the compilation called Let Them Eat Jellybeans on Alternative Tentacles Records (which for some reason remains out of print and never was reissued on CD) where I’d first hear the quirky art-punk sounds of Geza X. I’d seen his name in the credits of other records as being the person who recorded/produced them.

Geza X was around since the start of Los Angeles punk rock. His real first name is Geza, though I don’t know what his last name is. He took the X after Malcom X and he referred to his off-kilter art damaged punk as “X Music”. He played in The Deadbeats who were one of the earliest L.A. punk bands and put out a classic punk single on Dangerhouse Records. He was the resident sound man (and a resident) at the Masque, a club/punk flop house run by Brendan Mullen.

After the Deadbeats ceased to be, Geza went on his own and released a couple of singles and one LP. He, like many punks from back then, acquired a bit of a drug problem and dropped out of the scene and public eye. He managed to get it in check though and in the 80s started recording bands again, this time it would be rap music and he was involved with laying down to tape a lot of west coast rap artists at a time when the stuff was just starting to get noticed.

These days, Geza X still has a recording studio, this time in Malibu, CA and has evolved with the times and it is a state of the art digital setup. He was behind the knobs of Meredith Brooks hit “Bitch” among other things. A little while back Dionysus Records reissued the You Goddamn Kids album as well.

As always if you have any additional information, or are Geza X, please get in touch.