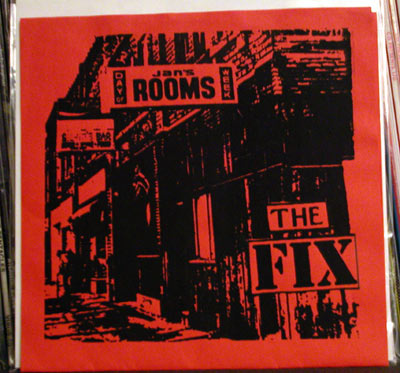 Selections from The Punk Vault [The Fix]

The Fix were one of the earliest midwest hardcore bands. They started in 1980 and didn’t waste any time in getting around. In 1981 their friends at Touch and Go Records (then run by Tesco Vee and Dave Stimson) put out their first single titled Vengeance. They pressed a mere 200 copies of it. The band toured the states taking the single with them and selling it at shows and giving it to college radio stations and it didn’t take long for them to go through them all. For some strange reason they never bothered to press up any more and now it is a sought-after collectors item. In fact, I have been wanting a copy of this record for so long it hurts.

Near the end of 1981 the band recorded a handful of songs, four of which ended up on this record, their second and final release. They toured the states one more time and when they got back home, the band parted ways after their drummer quit the band. The original members were:

They made 1000 of this single and early copies came with a spray-painted lyric sheet, and the rest came with a regular one. They were also on the Process of Elimination compilation 7″ that came out right about the same time as this record.

About a decade ago, Lost and Found Records from Germany reissued their material on an LP/CD titled Cold Days. The legitimacy of this release is in question, and is widely regarded as a bootleg. They also remixed the two songs from the first single, much to the chagrin of hardcore Fix fans.

After the band broke up, some members played in other bands. One played in a version of The Meatmen, and later Just Say No. I don’t know where they are now, or what any of the members are up to. I do know that they are well overdue for a proper, and legal reissue of this stuff. Someone bootlegged the first single a couple years ago.

As always, if you have any additional information, or you were in The Fix, please get in touch.