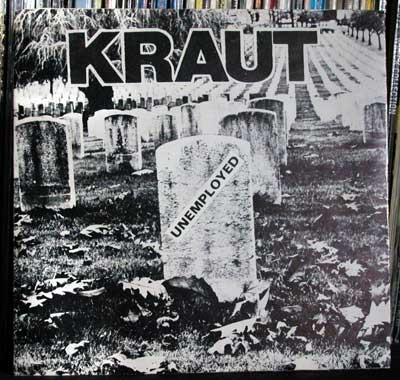 Selections from The Punk Vault [Kraut]

In 1981 The Clash played a string of sold out shows in New York City. They were sold out to the point of being way over-sold and to remedy the problem, the band decided to double up the number of shows they would play. This required them to find a small batch of opening acts, which caught the attention of the just-formed New York City punk band, Kraut. The lineup consisted of:

They literally had just formed and recorded a 3 song demo to give to the powers that be in order to secure one of the opening slots, which they were granted on the strength of said tape. They played the show and then immediately got to work on forging ahead. They re-recorded the songs again for real this time and released it on their first single, Kill For Cash. They pressed up 1000 of them and sold through them all.

The following year they went in and recorded some new songs for this release, and for the New York Thrash compilation tape on Roir Records. This time out, they pressed 5000 copies of the record and were playing lots of shows around the city. They had secured an opening slot for The Professionals, who were Steve Jones and Paul Cook’s band after The Sex Pistols broke up and Steve Jones took a liking to them. He ended up playing on a few songs that they recorded for their first album, An Adjustment to Society which came out in the same year as this single. He even played a show or two with them.

The album was released on their own label (Cabbage Records) again and was manufactured and distributed by Faulty Products. It sold pretty well but at one point Faulty went under and thus the record would be out of print for quite a few years before getting reissued by New Red Archives. A couple tracks from the singles ended up being re-recorded and were on this album. When this album was reissued on CD, they never bothered to put either 7″ on there, and these songs remain unavailable.

With Faulty products gone and them on their own, they did a tour of the US and played a bunch of local shows and started recording new material. This material showed them changing a little in sound, growing a bit, but still was quite good. They eventually hooked up with Enigma for a P&D deal and released their second and final album, Whetting the Scythe. Upon its release, they played some shows on the West Coast, after which Doug Holland left Kraut to join The Cro-Mags. They replaced him with a former member of Battalion of Saints and recorded a few songs which wouldn’t get released until the CD of the first album came out (the liner notes to this is where I got a lot of this information).

In 1986, Chris Smith died in a freak accident one week before the band were slated to record their third album. The other two original members decided to call it quits after this happened and started a new band, The Gutter Boys.

A few years ago, the surviving members of Kraut played a reunion show for the 20 year anniversary at CBGB’s of the New York Thrash compilation along with A.O.D. and a ton of other bands who were on the comp. There was also a live CD of an old show that New Red Archives put out.

Here’s hoping that they’ll get around to reissuing the 7″ recordings in some format.

As always if you have any additional information, or were a member of Kraut, please get in touch.