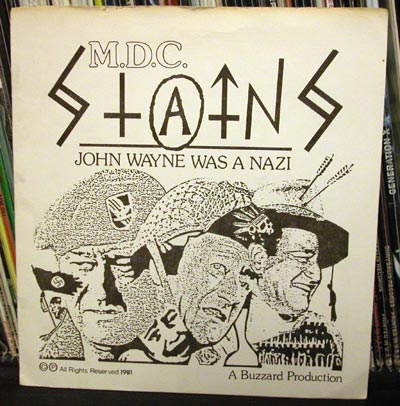 Selections from The Punk Vault [The Stains/MDC]

You might be more familiar with them as MDC (an acronym that would constantly change), but they got their start as The Stains.

In 1981 Dave Dictor, Al Schvitz, and Ron Posner, all residents of Austin, TX, formed a punk band called The Stains. They put out this 7″ before they realized there already was a band called The Stains (who put out one album on SST Records). They had to change their name because while there could be two Subhumans and two Youth Brigades, there could not be two Stains. A member of The Dicks (also a fellow Austin band) suggested the name and MDC they became.

Along with the name change came a change of residence. They moved to San Francisco and became pretty well known with the city’s peace punk movement. They moved into the “Vats” where another band, Condemned to Death resided and rehearsed. It wouldn’t be long before The Dicks would also relocate to San Francisco (well, half of them anyway).

Upon the name change and move, they put out their first album, which is a hardcore classic by today’s standards. They had their own label (Radical Records, later R Radical) and put out not only their own records, but by those of their friends Reagan Youth, Condemned to Death, The Offenders, and The Dicks.

The band toured the country plenty of times and put out a steady stream of records throughout the 80s, each one with a different theme and acronym. Over the years, members would slowly leave until Dave fond himself the only original member left. In the early 90s, the band (or at least Dave) relocated to Portland for a number of years. Dave also had a well documented (by him in his MRR columns) drug problem. Today MDC is still kicking with Dave and a crop of new members and Dave was residing in New York the last I heard. He was writing columns for Maximumrocknroll for a couple years but seemed to have stopped doing that. There is a MDC website that has a bunch of information on what the band is up to these days.

This particular record had two pressings. The first only had “The Stains” name on the sleeve, the second (pictured here) added the MDC name to reflect them having changed the name. The label art was different on the second pressing as well. I am actually in need of a picture sleeve for the first pressing as I have a copy of the vinyl that is missing the sleeve if anyone can help me out, please contact me.
As always, if you have any additional information or were in MDC, please get in touch.