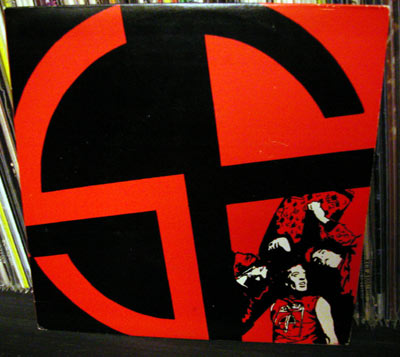 Shattered Faith were a Southern California punk band that started in 1978. It would be 3 years before they put out their first record, which is this single. They had appeared on a few compilations around this time as well. They signed a contract with Posh Boy Records and were to do an album after this 7″ but they had a falling out when the band found someone to back them and wanted out of their contract with Posh Boy. I asked Posh himself for his recollections and here is what he wrote…

They were very heavy pot smokers and they did not hide it so I was a fool for getting involved with them knowing it, But I was always thinking of the music and I was taken with the songs as I heard them performed. They just continued to get high and come up with career plans that did not account for reality. There was no real animosity between us, at first. They simply found a financial backer after going into the studio with me and they wanted out of their contract and for the sake of $1200 or so which I wanted them to reimburse me for, they gave me the finger. They wanted out probably right after the single when I was advertising their forthcoming. Their contract called for a minimum of 12 sides, similar to TSOL’s.
It’s a pretty straightforward scenario: I get them on the radio before the record is released to create demand, now other people take them seriously. That’s 1981, by 1982, all I had to do was give a group a contract to go over and other people would swoop in. The worst part of it was that they agreed to a buy out then balked. But in those days, there were plenty of people around who would just say “F Robbie, he won’t do anything”. People like Greenworld that became Enigma and Bug Music.

So after this, they released their first album titled Shattered Faith Live that had both live and studio tracks on it. Sometime after that, they put out Shattered Faith Volume Two and then I believe they broke up.

A couple years ago, they resurfaced and started playing some shows around southern California. Grand Theft Audio put out a collection of old works on CD and Posh Boy reissued the studio recordings they owned (6 songs, including this 7″) on a CD, which incidentally, I did the layout for. The band has a website. Sadly, one of the original members, Paul Jamie, who played bass (but not on this record) passed away this past New Years Eve. Remaining members seem to be playing in a band called Firecracker 500. Shattered Faith also seem to still be together in some capacity. I emailed the address on their website to ask if they’d like to chime in with any stories or history and the person who seems to answer their mail and probably does the site said they were practicing and that he’d ask. I never heard back from him though.

As always, if you have any additional information, or were in Shattered Faith, please get in touch.

Way back in 1986 I hadÂ a promo copy of the first Skulls album, Dress Up and Die, sent to me from Buy Our Records. They used to send me records to review in my fanzine, Spontaneous Combustion. I played that record and...