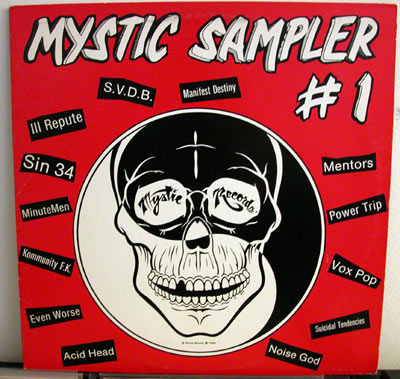 Doug Moody once told me a story about how he invented the compilation. According to him, way back in the 50s or 60s, he owned a record label called Herald, and he was friendly with a particular DJ who had the unfortunate problem of having to go to the bathroom quite often. The guy wished he had a way to not have to sit there playing single after single and always changing records every 3 minutes. Doug decided to press up an album of all of his hit records at the time that were getting airplay, this way the guy could put on the LP, then go drop a deuce and not have to worry about getting back in 3 minutes. This album was titled Herald the Beat and according to Doug, was the first compilation.

Now whether or not he did in fact invent the compilation could be open to debate. What is not open for debate is that his Mystic Records label put out a lot of really good compilations back in the heyday of hardcore. One of his ideas back then was to make a sampler of records on his label in an effort to promote the label as a whole, thus the Mystic Sampler series was born.

I bought this particular record I think solely for the reason The Minutemen and Suicidal Tendencies were on it. Suicidal’s particular track was the first thing they recorded before they ended up doing their now classic LP. Their song, “I Saw Your Mommy” is a different version than what ended up on that album, and to this day is exclusive to this compilation. Allegedly they were supposed to record a full album for Mystic but then blew it off.

The compilation ended up exposing me to a lot of great bands, many of which had other records on the label, and thus Doug’s plan succeeded, I bought those records and so did many others. Vox Pop was one band I had never heard of until getting this compilation, same with Ill Repute, The Mentors, and a band called Noise God, whose track is featured here. To the best of my knowledge, Noise God never released anything else, and I don’t know anything else about them. I would love to find out if they at least had any demos or perhaps a record I never was aware of. If anyone has any information on this band, please get in touch.

Two more Mystic Samplers would follow this one, one of them was great, the other one was just alright. They do rank rather high on my list of compilations however.

The first 1000 of these were pressed on red vinyl. There was then a second pressing on black vinyl.