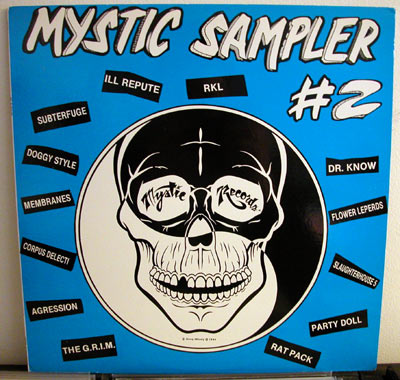 In continuing looking back at a time when the compilation was king, we have the second in the Mystic Sampler series. While Mystic Records and Doug Moody has its share of detractors, one thing that can’t be argued is the label and man put out some great hardcore records.

One year after the first label sampler, Mystic released the second one, and it was every bit as good as the first. Once again, this record exposed me to even more bands, most importantly the Flower Leperds, whose song “Preachers Confession” made me an instant fan of the band and made me seek out any and everything they did. Another band that I heard for the first time because of this compilation was RKL, whose track is featured here, and remains my favorite song of theirs. For some odd reason, it was not included on the RKL CD Mystic released in recent past. I would attribute that most likely to Doug being old, and not remembering everything these days.

I am sure eventually there will be a proper CD reissue of these sampler comps, I know I’d certainly like to see one.