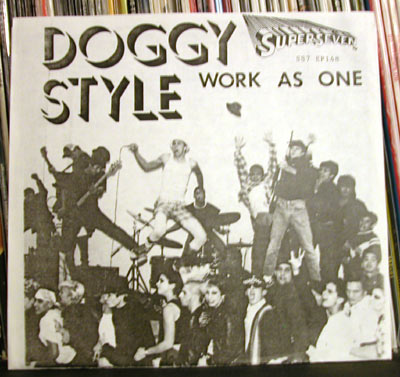 I believe I first heard of the band Doggy Style by reading the pages of Flipside fanzine. They were a bunch of hardcore kids from Southern California who were also into skateboarding, and since what I was into at the time were “both kinds of music” punk and hardcore, and I spent every free second not at school or a record store on my skateboard, it was a no-brainer to check this band out.

This would be their first release, which I picked up after I got their first album on Flipside Records. The record came out in 1985 and must have sold pretty well over the years back then as there were quite a few pressings. The first pressing had a hard glued sleeve and then would later be repressed with a xerox sleeve with either the mystic or Superseven logos on the front, and it also came on colored vinyl at one point too (500 pressed).

After this single, they put out a really good album, Side By Side, on Flipside Records. A couple of songs on this single were re-recorded on the album. Perhaps their most famous song is called “Donut Shop Rock” a song about, well, donuts.

A one-sided live album followed on Flipside a year later called Live at Sun City. It was a green silk screened record that came in a clear bag with a sticker on the bag with the record info on it. After that release the ugly happened, the band splintered into two separate factions and feuded over the name. At one point there was basically two Doggy Styles, similar to what happened with Life Sentence. One version put out a Doggy Style II album out on Flipside, and the other put out The Last Laugh on National Trust Records. The Flipside version must have lost out, and the remaining Doggy Style, by now a pretty bad rap-rock band, put out one more album on Triple X Records called Don’t Hit Me Up then called it a day.

Brad X, founding member and his brother Spike were in another band in the mid 90s called Humble Gods with Doug Carrion who was in the Descendents. Brad X is now in the Kottonmouth Kings who seemed to have garnered a bit of a following but have absolutely nothing in common with punk rock. I do not know what became of the other members of the band.

To the best of my knowledge, none of the Doggy Style records are available in any format. It would be nice to see the Flipside releases compiled together on a CD someday.

As always, if you have any additional information or were a member of Doggy Style, please get in touch.