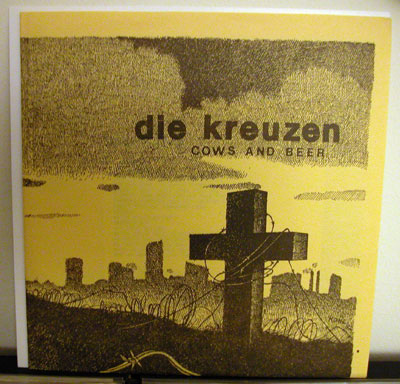 Aside from cheese and beer, Milwaukee’s other greatest export was a band called Die Kreuzen. Their name was German for “The Cross”. The band consisted of:

These same four gentlemen would be the members of the band all throughout their fairly lengthy career.

The band released this, their first record, in 1982 and then hit the road a toured the country, a lot. It would be two years before they would do another record, their self-titled album on Touch and Go Records. That would also end up being their last hardcore record as their sound would change shortly after its release.

One year after their first album, they released a follow up called October File. This album was well received by a lot of press back then, however with only a couple exceptions, nothing on it sounded like what came before it. They started playing longer, and slower songs that had more in common with rock than with punk, and they had this weird atmospheric sound to it. At the time it was pretty unique, and it was pretty good too. I actually liked all the Die Kreuzen records.

The records that followed (all of them on Touch and Go) were in the indie rock vein and were quite good for the genre. They never really seemed to catch on however and after a couple more albums and singles, they broke up.

As to where they are now, I have no idea. Most of their records can be found on CD through Touch and Go Records. This single was released as bonus tracks on the Gone Away CD.

This single had two distinct variations. There was a yellow sleeve version (the rarer one) and the more common white sleeve version. Both came with lyric sheets. A couple songs from this record ended up being re-recorded and were on the first LP.

As always, if you have any additional information or were a member of Die Kreuzen (or even were the guy who ran Version Sound) please get in touch.